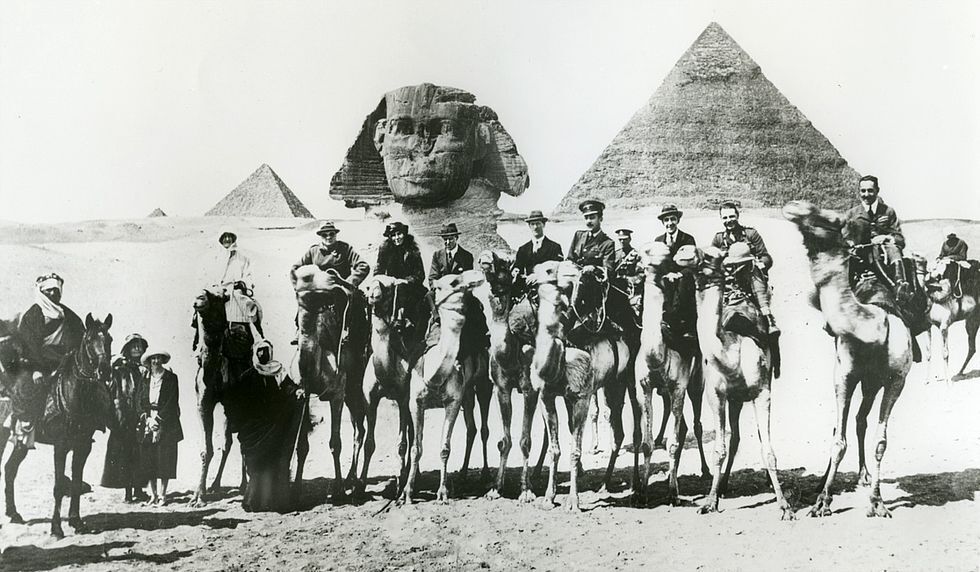 Sir Winston Leonard Spencer Churchill, kg, om, ch, td, dl, frs, ra, is known primarily as the statesman and prime minister of the United Kingdom whose lionlike leadership saw the Allies through World War ii—earning him the oft-cited title, “The Man Who Saved Western Civilization.” He was also, however, a prolific writer and historian, producing roughly 20 million words of written content over the course of his lifetime. These include the four-volume A History of the English-Speaking Peoples, six-volume The World Crisis, two-volume Lord Randolph Churchill, six-volume The Second World War, two-volume The River War, and numerous standalone history books and short stories.

What is less known is what Churchill had to say on the subject of Bible minimalism, the scholarly dismissal of biblical accounts as either partially or wholly the work of fiction. This particularly came into vogue in the 19th century, and was alive and well during the early 20th when Churchill (in 1931) penned an essay on Moses. This essay, titled “Moses: The Leader of a People,” was first published in the Sunday Chronicle under the superhead, “Great Bible Stories Retold by the World’s Best Writers”; it was later compiled into a book of collected Churchill essays titled Thoughts and Adventures. It contains a brief, tongue-in-cheek but also pointed discourse on the theme of biblical minimalism, which we feel may be of particular interest to our readers.

Churchill began his essay by summarizing the life of Moses. Partway through, he addressed the naysayers to the historicity of the account.

We reject, however, with scorn all those learned and laboured myths that Moses was but a legendary figure upon whom the priesthood and the people hung their essential social, moral, and religious ordinances. We believe that the most scientific view, the most up-to-date and rationalistic conception, will find its fullest satisfaction in taking the Bible story literally ….

He continued, tongue in cheek, to take a shot at Bible critics in the world of scholarship:

We remain unmoved by the tomes of Professor Gradgrind [a character from Dickens’ Hard Times, whose name has become a synonym for tedious, cold and uninspired fact-finding] and Dr. Dryasdust. We may be sure that all these things happened just as they are set out according to the Holy Writ. We may believe that they happened to people not so very different from ourselves, and that the impressions those people received were faithfully recorded and have been transmitted across the centuries with far more accuracy than many of the telegraphed accounts we read of the goings-on of today.

At this point in his essay, Churchill did cede to the established conclusion at the time that textual analysis showed that “the Pentateuch constitutes a body of narrative and doctrine which came into being over at least the compass of several centuries.” This position has since been countered by the weight of new research and analyses showing that despite evidence of later, minor edits and textual clarifications, the body of the Torah must have been written at the time of Moses. Still, if anything, Churchill’s statement indicates he was well read on this niche subject. Despite believing the Pentateuch was written over several centuries, he roundly rejected the notion that the events described were thus fictional. In his conclusion to the essay, Churchill issued the following challenge and prediction:

Let the men of science and of learning expand their knowledge and probe with their researches every detail of the records which have been preserved to us from these dim ages. All they will do is to fortify the grand simplicity and essential accuracy of the recorded truths which have lighted so far the pilgrimage of man.

That’s quite the claim. Was he right? The “men of science and learning” have, since the original time of writing, had nearly a century of advancement in scientific methods, archaeological excavation and other disciplines. In the decades since, there has been a measurable ebb and flow of trends both toward and away from biblical minimalism.

But where are we now, in the 21st century? What have archaeology and science revealed, in general, about Bible historicity? The following is from perhaps the most famous (or at least the most famously cited) of the Bible-critical archaeologists, Prof. Israel Finkelstein, in an interview he gave last year with Dr. Matthew Adams of the W. F. Albright Institute of Archaeological Research. In it, he briefly summarized the history of debate about Bible historicity, especially as it pertains to archaeology.

“There have been two camps, till today. One camp, the camp of the more conservative approach, more conservative scholars. They basically walk in line of the biblical texts,” he stated. “And then there is the critical camp with roots that go back to Spinoza in the 17th century, and of course to the high research of biblical scholarship, exegesis, in Germany and central Europe in the 19th century, with big names like de Wette and Wellhausen and others. And there were ups and downs in the debates.” He continued:

So, the critical side had the upper hand in the 19th century, any way you look at it. And then, starting in the 20th century, archaeologists “struck back,” so to speak. A very conservative way of using archaeology, represented by the great scholar, after whose name this institution is called—Albright, William Foxwell Albright …. [H]e tried to show that the critical approach to the Bible can be brushed aside, can be pushed back by the new evidence of archaeology.

Still, the cause of conservative archaeologists was mainly driven by America. “In fact, in biblical research, critical biblical exegesis continued, in Europe especially, throughout the 20th century,” Finkelstein explained. This was the phenomenon referenced by Churchill in his essay.

“Then, after Albright, starting in the ’80s or ’90s, there has been a new wave of critical approach to archaeology and to the Bible,” Finkelstein said. He concluded his summary with the following striking statement: “And in my opinion, now we are in a new phase of attempts to show that archaeology can strike back at the critical approach.”

One particular example comes to mind: an early “conquest period” discovery made at Mount Ebal in the 1980s by Prof. Adam Zertal, paralleling a particular account in the Torah and the book of Joshua (read more about this here). Of this discovery, Harvard University professor Lawrence Stager commented: “If the ruin on Mount Ebal is what Adam Zertal says it is, the effect on archaeology and Biblical studies will be revolutionary; we will all have to go back to kindergarten.” Following another remarkable discovery from the site in 2019, Dr. Scott Stripling declared: “School’s in session!”

Indeed, around 150 years on from the inception of biblical archaeology, we have an enormous trove of information, much of which was not available at the time of Churchill’s speech. As he put it, further research and the expansion of knowledge have only “fortif[ied] the grand simplicity and essential accuracy of the recorded truths” contained in the “Holy Writ.” Currently, nearly 60 different personalities mentioned in the Hebrew Bible have been independently proved by archaeology to have existed, including 14 kings of Israel and Judah. Biblical archaeology has confirmed the locations of dozens of biblically important cities, as well as the events that happened within them. It has verified everything from biblical civilizations and major conflicts to minor (and even peripheral) skirmishes, cultural customs, dietary details, personal names, clothing items, architectural elements, and even common sayings. It has confirmed events from biblically attested earthquakes to famines to fire and brimstone.

It has corroborated the wider biblical account of general periods, not just from later eras but also back to very early ones: from that of the diaspora and Nehemiah’s governorship to the fall of Judah at the hands of the Babylonians (including what they were drinking at the time); from the fall of Israel to the Assyrians to Sennacherib’s miraculously thwarted conquest of Judah; from the strength of the united monarchy of David and Solomon back through numerous events of the Judges account (see here, here, here, here and here). And yes, archaeology has even served to provide evidence for the particulars of the Israelite sojourn in, and Exodus from, Egypt (including the composition of the Torah at this time)—a sojourn and exodus explained in particular detail in the rest of Churchill’s essay.

There is much that remains unknown. The “men of science and of learning” continue to “expand their knowledge and probe with their researches every detail of the records which have been preserved to us from these dim ages.” But as we learn more, you could say that though he was no archaeologist or recognized “Bible scholar,” Churchill’s words from nearly a century ago—his dip into the debate about Bible historicity—have stood the test of time.