Scriptural phrases that have been confirmed in the archaeological record
By Christopher Eames • November 27, 2019 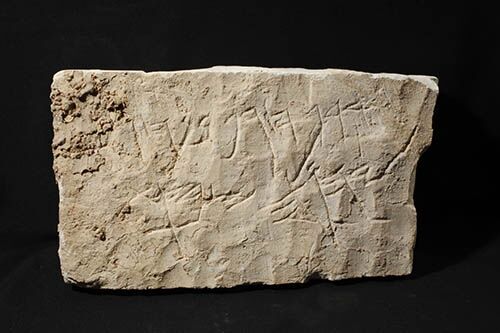 Stone block reading “Cursed be Hagaf son of Hagab by the Lord of Hosts.”
BLMJ Collection

Archaeological discoveries have corroborated much of the biblical account. Often, news reports describe individuals that have been proved (currently, nearly 60 from the Hebrew Bible) or ancient cities that have been discovered (of which there are dozens, as well as evidence of the biblical events that happened within them). It has verified everything from biblical civilizations and major conflicts to minor skirmishes, cultural customs, dietary details, clothing items and architectural elements.

But another, often overlooked area of corroboration with the Scriptures is in common sayings.

The Bible, of course, is full of dialogue. And a number of ancient inscriptions have been found, actually paralleling the statements, sayings and quips of biblical individuals. Listed here are a handful of examples, along with one longer, remarkable decree at the end.

The Lord Bless You and Keep You

This is the title of a famous choral composition by John Rutter, as well as a classic Judeo-Christian “blessing.” It is taken from Numbers 6:24-26.

And, as archaeology has shown, it was a blessing recited as far back as the seventh century b.c.e. During archaeological excavations on the edge of the Valley of Hinnom in 1979, not far outside ancient Jerusalem’s walls, a large treasure cache was found in a burial tomb. Two small silver scrolls were discovered, which contain portions of Scripture, notably from Numbers 6:24-26 and Deuteronomy 7:9. (These are the oldest biblical texts ever found, predating the Dead Sea Scrolls by some 500 years.) Here’s what they read:

May the Lord bless you and keep you; May the Lord cause his face to shine upon you and grant you peace.

The Lord bless thee, and keep thee; The Lord make His face to shine upon thee, and be gracious unto thee; … and give thee peace. (Numbers 6:24-26)

… the great … [who keeps] the covenant and graciousness toward those who love [him] and those who keep [his commandments] ….

May the Lord bless you and keep you. [May] the Lord make [his face] shine ….

… the faithful God, who keepeth covenant and mercy with them that love Him and keep His commandments …. (Deuteronomy 7:9)

These funeral blessings were evidently picked from an existing body of Scripture within the Torah—Scripture which, according to the skeptics, wasn’t supposed to have existed yet.

We go back now to an earlier account of the sisters Rachel and Leah, wives of the patriarch Jacob. They are frustrated with their greedy father Laban, and desire to leave with Jacob. Genesis 31:14-15 read:

Then Rachel and Leah answered him, saying, “Have we still a share in the inheritance of our father’s house? Surely, he regards us as outsiders, now that he has sold us and has used up our purchase price.”

The phrase “used up our purchase price” doesn’t accurately capture the imagery given by these woman—the exact translation is, “eaten our silver.” This strange phrase “eating the silver” has been corroborated by archaeology, and dates to the same general period. It refers to a similar situation with Laban—cases where a man took advantage of selling off his daughter and retained the bride price entirely for himself, not turning anything over for her benefit (such as in the form of a dowry).

Placing His Name in Jerusalem

Jerusalem has a special place as the central city of the Bible. Indeed, in a number of scriptures, God affirms that He has personally chosen the city (e.g. 2 Chronicles 33:4, King James Version: [T]he lord had said, “My name will be in Jerusalem forever.”)

Jerusalem has been sought after, literally, for millennia—and with the same verbiage.

Abdi-Heba was a puppet governor of Jerusalem circa 1400 b.c.e. At that time, Canaan was under the control of Egypt, but the entire land was facing an invasion from a people known as the Habiru (whose name, period and deeds match well with the biblical account of the Hebrews’ post-Exodus invasion of Canaan). The Canaanite leaders sent desperate letters to the pharaoh for assistance, but to no avail. These discovered artifacts are known as the Amarna Letters. Abdi-Heba included in one of his an interesting statement: “As the king [pharaoh] has placed his name in Jerusalem forever, he cannot abandon it ….”

And as is blatantly obvious, the pharaoh’s name has no longer any attachment to the holy city—but God’s name certainly does!

Lord of Heaven, Lord of Hosts

Even expressions that don’t appear in the archaeological record back up the biblical account. Here’s an example.

The book of Daniel, traditionally dated to the sixth century b.c.e., contains numerous detailed prophecies of future kingdoms. Skeptics, thus, believe that the book was a late fraud—written several centuries later, during the second century by Maccabean ghostwriters after many of its prophecies had been fulfilled. Actually, the overwhelming burden of evidence proves this theory false—more can be read about this subject here.

One of the minor points, though, proving an early date for the book of Daniel, is the fact that the prophet uses the term “Lord of heaven” (Mareh shameah). This phrase was not used during the Maccabean period, due to its later, specific associations with the pagan god Zeus.

And while noting the term “Lord of heaven,” the expression “Lord of Hosts” (Yahweh Tsevaot, literally Lord of Armies) is a common one, used 235 times in the Hebrew Bible. It has been demonstrated by archaeology, notably a limestone block from a burial cave dating to circa 800–750 b.c.e. The inscription reads: “Cursed be Hagaf son of Hagab by the Lord of Hosts.” This may be the earliest known use of this term. The Prophet Isaiah, who was on the scene around the same time, was particularly prolific in his use of this term.

This extremely significant inscription was found in the “Davidic” city of Khirbet Qeiyafa in 2008. This one is particularly notable due to the early nature of the text—10th-century b.c.e. Hebrew. While the five-line text does not specifically match any biblical text, it shows a general understanding at that time of the same principles and wordage, and reads similarly to several biblical passages. The ostracon has been translated as follows:

You shall not wrong a stranger or oppress him … You shall not ill-treat any widow or orphan. (Exodus 22:20-21)

Both these texts are traditionally dated early—the psalm to this same period, and the Exodus account several centuries earlier. Many scholars, however, have claimed that these scriptures (and the Bible in general) were written several centuries later. But according to Gershon Galil, professor of biblical studies at the University of Haifa, this discovery provides compelling evidence that the biblical texts were written “hundreds of years before the dates presented in current research” (emphasis added).

Finally, the most well-known discovery of them all: the Cyrus Cylinder. This sixth-century b.c.e. inscription is touted as the first-ever “charter of human rights,” created by the benevolent first king of the Persian Empire: Cyrus the Great. This king is described in several Bible verses and praised for his magnanimity toward the Jews in decreeing them freedom to return to Jerusalem and rebuild the temple.

The Cyrus Cylinder caused an archaeological earthquake, because it essentially carried the same message—to the conquered Babylonians. This artifact, then, was proof of the peculiar benevolence of this king and his deference toward conquered peoples. The Cyrus Cylinder decreed the conquered people full freedoms, and the opportunity to rebuild and worship at their temples. Cyrus wrote it with deference to the Babylonian god Marduk. Several parts closely parallel the biblical account. Here are some excerpts from the inscription:

I am Cyrus, king of the universe … king of the four quarters of the world … Marduk, the great lord, bestowed on me as my destiny the great magnanimity of one who loves Babylon … I sought the welfare of the city of Babylon and all its sanctuaries. … I sent back [people] to their places … whose shrines had earlier become dilapidated, the gods who lived therein, and made permanent sanctuaries for them. I collected together all of their people and returned them to their settlements ….

Ezra 1:1 describes a parallel account that Cyrus put in writing and proclaimed “throughout all his kingdom.” Verses 2-3 read:

‘Thus saith Cyrus king of Persia: All the kingdoms of the earth hath the Lord, the God of heaven, given me; and He hath charged me to build Him a house in Jerusalem, which is in Judah. Whosoever there is among you of all His people—his God be with him—let him go up to Jerusalem, which is in Judah, and build the house of the Lord, the God of Israel …

Another portion of the cylinder parallels another scriptural passage referring to Cyrus:

[The Babylonian god Marduk] took under his hand Cyrus, king of the city of Anshan, and called him by his name, proclaiming him aloud for the kingship over all of everything. … Marduk, the great lord … ordered that he should go to his city, Babylon. [Proceeds to describe the taking of Babylon.]

Isaiah 45:1-4 is a prophecy of Cyrus—naming him—written 150 years earlier by Isaiah the prophet:

Thus saith the Lord to His anointed, To Cyrus, whose right hand I have holden, To subdue nations before him … [proceeds to prophesy the taking of Babylon] … That thou mayest know that I am the Lord, Who call thee by thy name … I have called thee by thy name, I have surnamed thee, though thou hast not known Me.”

The parallels are obvious. The passage not only prophesies of Cyrus by name—it also prophesies his decree that Jerusalem and its temple (which in Isaiah’s day were still standing) would be rebuilt (Isaiah 44:28; more can be read about this prophecy here).

Something must have inspired Cyrus to write such an account on his royal cylinder—of mercy to conquered peoples—of rebuilding temples—of being led by the hand by a divinity who calls him (prophesies of him) by his name. The first-century c.e. historian Josephus stated that Cyrus was actually shown this prophecy. “Accordingly, when Cyrus read this, and admired the divine power, an earnest desire and ambition seized upon him to fulfill what was so written …” (The Antiquities of the Jews, 11.1.2).

This is just a small assemblage of finds that directly corroborate sayings and quips in the Bible. They help to illustrate just how much corroboratory evidence has been discovered, to the tiniest of details, backing up the biblical account.

Despite attempts to date the Bible as having been written centuries after the events and dates contained within, these discoveries—along with numerous others—prove the incredibly detailed, period accurate information contained within.

Truly, the Bible is a magnificent historical record, matching perfectly with scientific evidence. And new discoveries are being made constantly. Which part of our accurate biblical record will be discovered next? Which individual? What city? Which saying?