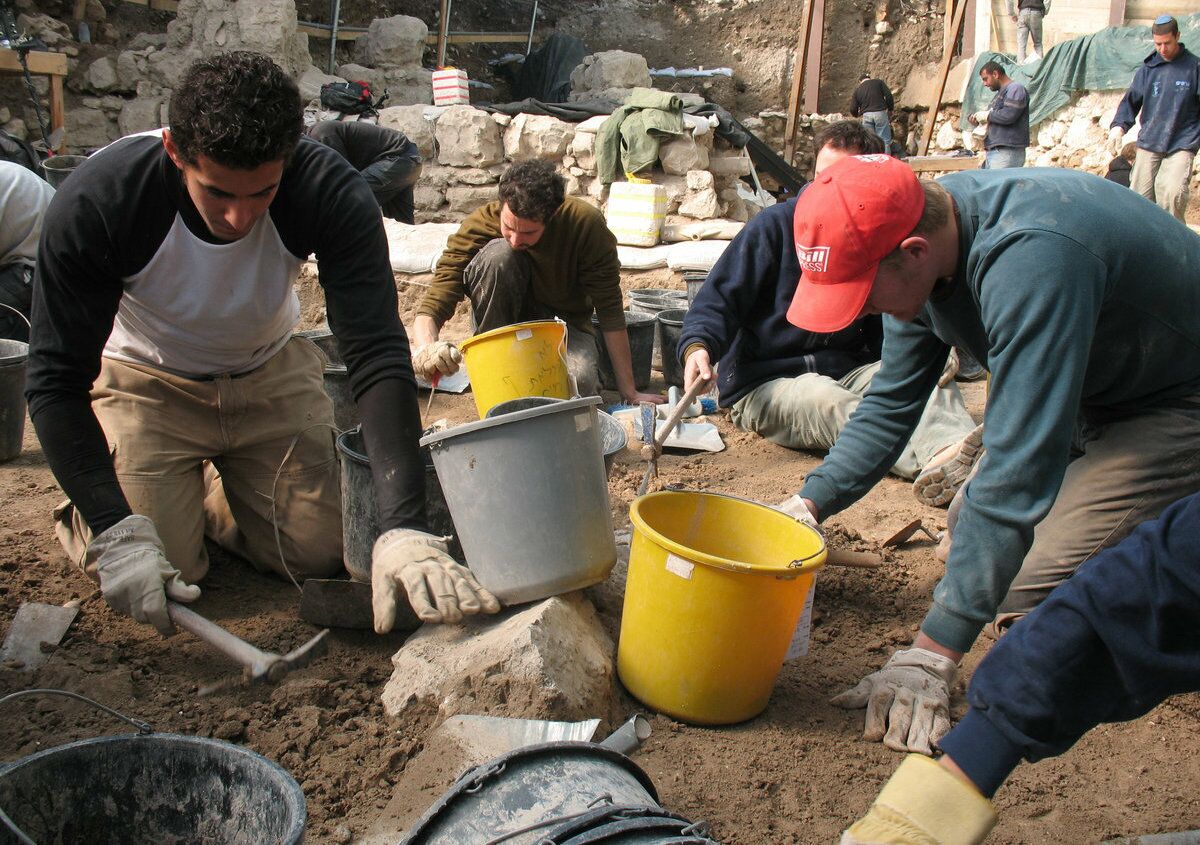 When we write about archaeological discoveries, we often describe pottery, inscriptions, tools, jewelry, etc. But alongside all the pottery comes a plethora of animal bones—and these are a vital part of the archaeological (or more properly, archaeozoological) research of a given ancient community, of what they ate. After all, we are what we eat, right?

So what “were” the ancient inhabitants of Jerusalem?

It is well known that the Bible commands the consumption of only kosher foods. No pig. Only land-based, cud-chewing animals with cloven hooves. Fish with fins and scales. Etc. These laws are detailed in Leviticus 11 and Deuteronomy 14, said to have been written circa 1400 b.c.e. by the hand of Moses.

From circa 1000 to 586 b.c.e. (the period known as Iron Age ii), Jerusalem was the Jewish capital. Based on archaeological excavations in this city, then, just how well did the Jewish population of Jerusalem adhere to the kosher laws? Do the discoveries back up the biblical account of Jewish religious observance?

Dr. Eilat Mazar can be considered the “queen” of Jerusalemite archaeology, having begun her “career” on digs in the capital city as a child. She has conducted numerous excavations of her own in the lower City of David and upper Ophel area. I have had the privilege of excavating with her on a number of occasions, helping unearth both bucketloads of pottery and bagfuls of animal remains.

Dr. Mazar has now published the results of her 2005–2008 City of David excavations and 2009–2013 Ophel excavations in a series of thorough academic volumes. In this article, we’ll look at the results of the faunal analysis, completed by archaeozoologists Omri Lernau, Liora Kolska Horowitz, Karin Tamar and Guy Bar-Oz. The faunal remains thus far published in the current volumes come from two specific areas that we will describe in this article:

These are two comparatively small excavation areas (especially Ophel Area A)—yet from these assemblages alone, the results are fascinating.

We begin with the fish remains. A large number were discovered within both excavation areas. The majority of remains by far were from porgies—a small, clean saltwater fish. Other examples included mullets, cichlids and groupers.

Notable, though, were the high number of catfish remains discovered—from the Ophel, 15 percent of all fish remains; and the City of David, 28 percent. Curiously, some remains of rays were also found in both locations—a dietary oddity sourced either from the Mediterranean or the Red Sea.

The above-mentioned researchers note that fish would generally have had to be transported after it had been dried, because of the long journey from the sea and freshwater sources to Jerusalem. The Bible mentions a specific gate of the city apparently for just such trade: the “fish gate,” described in 2 Chronicles 33:14, Nehemiah 3:3 and Zephaniah 1:10.

Regarding the unclean fish: Taken as a whole, they are still in the minority of the consumed assemblage of fish. But it is interesting to note that based on the remains found in different strata in the City of David, the relative percentage of catfish consumed dramatically spiked just before the fall of Jerusalem to the Babylonians. The Bible describes this as a rebellious time in which, among other things, the inhabitants were consuming unclean food—a time that culminated in the destruction of the city. More on this further down.

This pre-destruction “spike” is interesting to note because it surpasses the percentages of catfish remains found in other excavations of this time period around Israel, and even within Jerusalem. Omri Lernau speculates that this is the result of a specific group of people inhabiting the large building above the Area G dump, “not representational of the general inhabitants of the city.” Dr. Mazar has identified this building as King David’s palace—a building that would have continued into this period, just before the Babylonian destruction, as a royal administration building. The royal seals of two biblical princes of this period, Jehucal and Gedaliah, were found here—these two, and their fellow cronies, attempted to have the Prophet Jeremiah put to death. The prophet writes about these particularly loathsome, rebellious individuals who would likely have occupied this building. It seems they had a taste for catfish.

Catfish, as mentioned, were deemed non-kosher by Judaic laws in the Bible. Apparently, Iron iia Israelites in Jerusalem [the early, united kingdom period of David and Solomon], whose food remains were found in the “pool,” did in fact refrain from eating catfish, while the inhabitants of the later buildings above the dumps in Area G [the assemblage described in this article] did not. The reason for the latter could be connected to a reduced adherence to biblical tradition or because the inhabitants belonged to a different ethnic group.

Catfish remains continued to be consumed in the city on into the Persian period. This too is interesting to note, when paired up with an account of the parallel time period in Nehemiah 13:16. “There dwelt men of Tyre also therein, who brought in fish, and all manner of ware, and sold on the sabbath unto the children of Judah, and in Jerusalem.” Nehemiah proceeded to sharply rebuke the inhabitants, shutting out the traders from entering into the city on the Sabbath. Given the Jews were failing to keep the Sabbath, it is unsurprising that they would be buying unclean fish from the pagan Tyrians. The Persian period fish remains found in the City of David may well constitute these very purchases described in Nehemiah.

The majority of Iron Age ii mammal remains in both Area G and Area A belong to the expected creatures: sheep, goats, cattle. However, pig remains were also found.

Actually, pig remains are found across most Iron ii sites in Judah—but, unlike the neighboring countries, the ratios are far smaller—around 2 percent of the faunal assemblage. The same overall percentage was discovered on Dr. Mazar’s 2009 Ophel excavation; although, the pig remains in one of the earth layers—the upper, latest layer—represented a high 10 percent of the total remains.

This consumption of pork fits well, again, with the biblical account. The generally extremely low percentages, when compared to the diets of Israel’s ancient neighbors, clearly attest to the existence of laws forbidding its consumption. However, there did remain individuals even within the royal city who consumed the forbidden animal. This makes sense, given the number of rebellious Judahite kings that ruled from Jerusalem’s Ophel. Actually, the 10 percent spike in pig consumption—based on the layer in which it was found—may well relate to the reign of King Manasseh, who presided over some of the most shocking abominations in Judah’s history (2 Kings 21). Regarding the consumption of pig (among other things), the Prophet Isaiah—who according to tradition was killed by Manasseh—delivered the following condemnation from God (Isaiah 65:2, 4; 66:17):

I have spread out My hands all the day Unto a rebellious people … That eat swine’s flesh, And broth of abominable things is in their vessels …. They that sanctify themselves and purify themselves To go unto the gardens, Behind one in the midst, Eating swine’s flesh, and the detestable thing, and the mouse, Shall be consumed together, saith the Lord.

It is, perhaps, fitting that the personal seal stamp of the Prophet Isaiah was found in the same earth-fill as these pig bones.

The City of David excavation of Area G did not reveal any pig remains. It did, however, uncover a variety of remains of various other creatures. The earliest remains from the Area G assemblage date to the very end of Iron iib—essentially, the last 50 years before the fall of Jerusalem in 586 b.c.e. While the majority of bones were from goat, sheep and cattle, various other animal remains from this period included donkey, dog, cat, hare, rat and mouse. Considering these remains related to the last desperate moments before the fall of Jerusalem, it is likely that they were consumed by the inhabitants. Famine was rife in the city during the two-year siege (2 Kings 25:2-3), to the point that mothers were boiling and consuming their own children (Lamentations 4:9-10). This was the horrific end that had been prophesied by Isaiah—the result of idolatry, witchcraft and general rebellion—including the blatant rejection of God’s laws of clean and unclean foods.

Thus we see that not only do archaeological finds such as inscriptions and structures corroborate the biblical account—so too do the plain old, “boring” bone fragments.

And they are important for another reason. The typical minimalist view is that the Torah—the first five books of the Bible—were forged by late writers, claiming to represent the hand of Moses. The standard jedp hypothesis claims that parts of the Torah were variously written some 1,000 years later than “Moses” by a “J” Jahwist writer, an “E” Elohist writer, a “D” Deuteronomist writer, and a “P” Priestly writer. According to the theorized divisions, the clean and unclean laws of Leviticus 11 were written by the “P” writer circa 450 b.c.e., and those of Deuteronomy 14 were written circa 600 b.c.e.

But with the faunal remains uncovered in Jerusalem and at sites all around Israel, we see the results of “clean” and “unclean” laws in place nearly 1,000 years before! Sure, there are small percentages of unclean remains—but the Bible itself attests to these. (For more evidence for the traditional dating of the Torah, see our article on the subject here.) The archaeology is clear—there was a stark distinction between ancient Israel and its neighbors, from the period relating to Israel’s conquest of Canaan (circa 1400 b.c.e.) onward.

A distinction that remains to this day. Yet still, as with ancient Israel, the pork and catfish continue to be served up.