The Armstrong Institute of Biblical Archaeology (AIBA) and student volunteers from Herbert W. Armstrong College (AC) have supported Dr. Eilat Mazar and Hebrew University since 2006 in excavations in the City of David and on the Ophel.

Following the death of Dr. Mazar in May 2021, AIBA and AC have continued the archaeological legacy of Eilat on the Ophel and in the City of David by working in partnership with Prof. Yosef Garfinkel and Hebrew University. AIBA also works closely with the City of David Foundation, the Israel Antiquities Authority, and some of Israel’s best archaeologists.

Scroll down to learn more about the projects of Dr. Mazar and her grandfather, Prof. Benjamin Mazar. 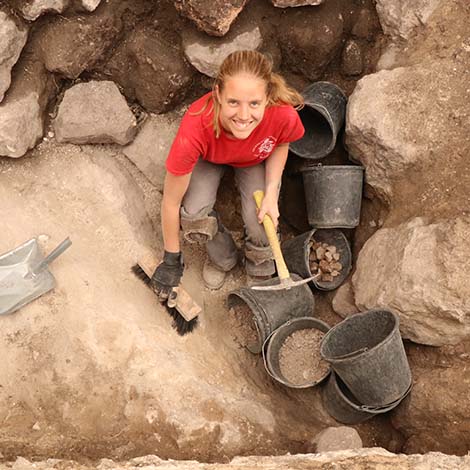 In March 2018, in a special announcement for the Jewish holiday of Pesach (Passover), Dr. Mazar announced the discovery of dozens of Jewish Rebellion coins from c.e. 66-70 found during the excavation. Mazar’s discovery is one of the largest caches of Year 4 (c.e. 70) coins ever found. Together with Dr. Mazar’s staff, aiba is currently processing and documenting the remainder of finds from this phase in preparation for the final publication report.

END_OF_DOCUMENT_TOKEN_TO_BE_REPLACED 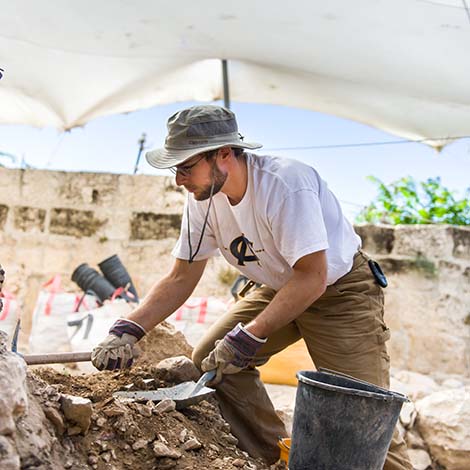 During the summer of 2013, 14 Armstrong volunteers worked with Dr. Mazar on Phase 2b of the Ophel excavation. During this dig, the now-famous Menorah Medallion was uncovered (along with a treasure trove of gold and silver coins) on the floor of a Byzantine structure. During the four-month excavation, all three areas reached the earliest remains of the Ophel site, all of which dated to the First Temple period.

END_OF_DOCUMENT_TOKEN_TO_BE_REPLACED 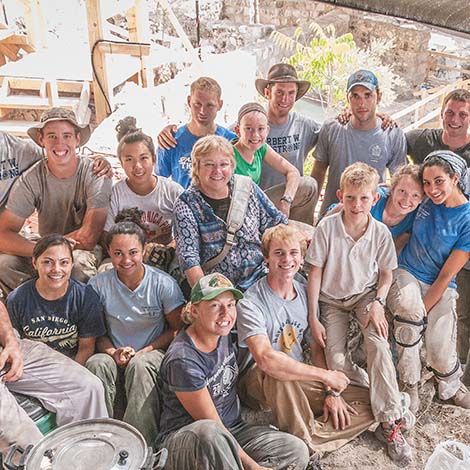 The 2012 excavation ran from August through December, and Armstrong College supplied 17 laborers and support staff. During this phase, Dr. Mazar and her team reached Iron Age layers.

During Phase 2a, Mazar’s team uncovered the earliest Hebrew inscription ever discovered in Jerusalem, along with a royal Israelite (proto-Aeolic) pillar capital, Herodian ritual baths and a large wall dating to the time of King Solomon. In addition to supplying laborers for the excavation, aiba assisted Dr. Mazar with processing the finds and preparing the final report for publication.

END_OF_DOCUMENT_TOKEN_TO_BE_REPLACED 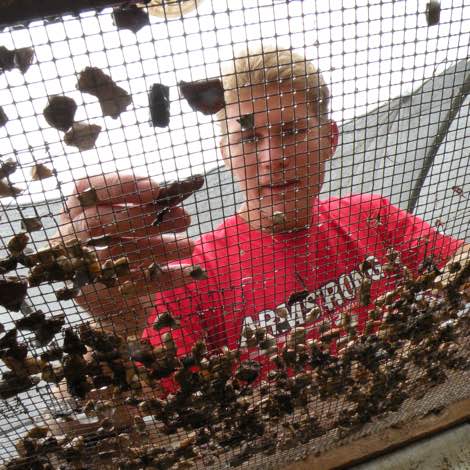 In 2009, Dr. Mazar returned to the Ophel, where her grandfather excavated in the 1970s and Mazar herself dug in 1986. Situated adjacent south of the walls of the Temple Mount, this area has furnished many significant artifacts.

During the first season of this dig, two Armstrong College students joined Dr. Mazar. These students participated in the discovery of two sensational bullae; the first belonged to King Hezekiah of Judah, the second to Isaiah. Both bullae are the first of their kind ever found in controlled archaeological excavations.

During this phase, the Gatehouse structure originally discovered in 1986 was conclusively dated to the 10th century b.c.e., the time period of King Solomon. Mazar and her team also excavated more gigantic walls, estimated to be more than 200 feet long and almost 20 feet high, that further proved this area was part of King Solomon’s royal complex.

END_OF_DOCUMENT_TOKEN_TO_BE_REPLACED 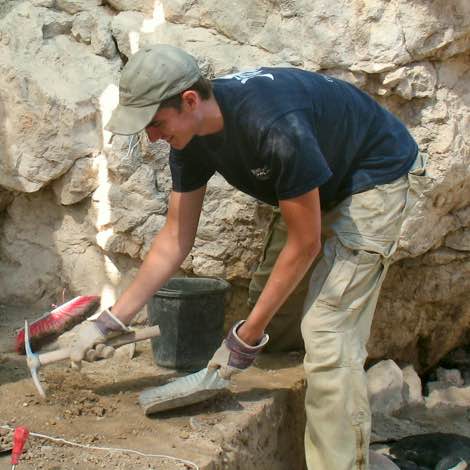 During the summer of 2007, five volunteers joined Dr. Mazar’s team in Jerusalem. At first, the volunteers assisted Dr. Mazar in the office, before eventually joining her when she returned to the field to conduct Phase 3 of the City of David excavations.

During this season, a collapsing wall (which needed to be repaired) was dated to the time period of Nehemiah. Mazar’s team also discovered the Gedaliah bulla, the seal of one of the Judean princes who persecuted the prophet Jeremiah (Jeremiah 38). The team also excavated a water tunnel more than 150 feet long. Dr. Mazar posited that the tunnel might have been the conduit King David’s forces used to conquer the city in the 10th century b.c.e.

END_OF_DOCUMENT_TOKEN_TO_BE_REPLACED 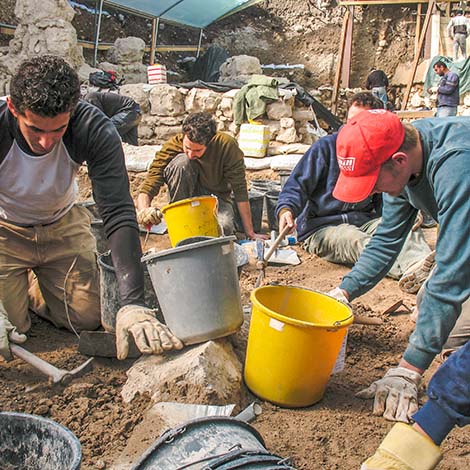 In October 2006, Herbert W. Armstrong College dispatched the first group of student volunteers to Jerusalem. The volunteers joined Dr. Mazar for Phase 2 of her excavation in the City of David. During this phase, Mazar’s team uncovered the gigantic eastern wall of the Large Stone Structure (King David’s palace).

END_OF_DOCUMENT_TOKEN_TO_BE_REPLACED

While the Armstrong Institute of Biblical Archaeology has assisted Dr. Mazar since 2006, our legacy with biblical archaeology and excavations in Israel goes back more than 50 years, to November 1968. The institute picked up the mantle of the Ambassador International Cultural Foundation, an organization founded in March 1975 by the late humanitarian and religious leader Herbert W. Armstrong.

Under Mr. Armstrong the Ambassador Foundation supported academic and humanitarian ventures all over the world, including Vietnam, Sri Lanka, Jordan and Japan. As a devoted student and teacher of the Bible, Mr. Armstrong cherished both the remarkable history and the glorious future of Jerusalem. Between 1967 and 1986, the year he died, Mr. Armstrong visited Israel more than 50 times, befriending some of the nation’s top leaders, most especially Jerusalem’s mayor, Teddy Kollek.

Following Israel’s victory in the 1967 war, Prof. Benjamin Mazar (Dr. Eilat Mazar’s grandfather) was put in charge of Hebrew University’s massive new archeological dig on the Ophel, situated adjacent south of the Temple Mount. In the fall of 1968, Mr. Armstrong flew to Israel to meet with Professor Mazar and inspect the dig site. He was impressed by the scope and importance of the excavation, and formed an immediate connection with Prof. Mazar.

On December 1, 1968, the partnership between Herbert W. Armstrong and Professor Mazar to excavate the Temple Mount was formalized at the presidential palace in Jerusalem. At this meeting, Tourism Minister Moshe Kol proposed “an iron bridge” between Hebrew University and Ambassador College “that can never be broken.” Today this wonderful partnership is continued through Hebrew University, the Armstrong Institute of Biblical Archaeology and Herbert W. Armstrong College.

END_OF_DOCUMENT_TOKEN_TO_BE_REPLACED

AIBA Brief
Subscribe to receive updates and articles from the aiba.