The Antiquity of the Scriptures: The Torah

How ancient is the Bible, anyway? Which is more correct: traditional dating or revised, late scholarly dating?
By Christopher Eames • November 4, 2017 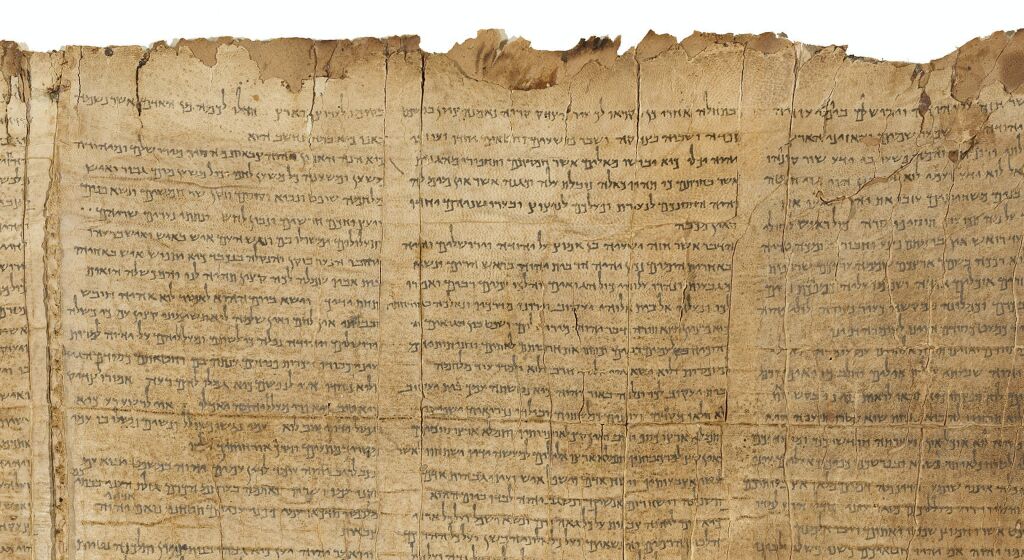 The Great Isaiah Scroll, one of the 2000 year old scrolls found at the northern edge of the Dead Sea.
Public Domain

The dating of the Bible is a controversial topic. Traditionalists say the Torah was written by Moses; the Psalms, mostly by David; Proverbs by Solomon; the prophets—by whichever name is carried in the title. Daniel? Sixth century b.c.e.

Revisionists say the Torah was written after the Babylonian captivity—along with everything else, really. Daniel? Second century b.c.e. Books of individual names were most likely written by multiple ghostwriters.

This is a hot-button debate. Can we really know the answer? Just how ancient and authentic are the biblical writings? With this article we begin the first installment of a three-part series, examining the archaeological evidence, linguistic style, textual content and contemporary works related to this question. The Tanakh, or Old Testament, is divided into three main sections: the Torah (Law), the Writings, and the Prophets. For this first installment, we’ll look at the Torah.

First, though, for such a subject as this, mention must be made of what has been considered the “greatest manuscript find of all time”—the Dead Sea Scrolls. They are a trove of over 800 documents, as well as tens of thousands of fragments, discovered in a network of caves near the northwest shores of the Dead Sea. These scrolls date variously between 200 b.c.e. and a.d. 68. They most likely belonged to the Jewish sect known as the Essenes.

Particularly interesting is that this collection of documents includes either a partial or complete copy of every book of the Hebrew Bible (minus the book of Esther). That means that these works must have been composed sometime earlier than their individual dates given within the 200 b.c.e. to a.d. 68 timeframe. (As an interesting fact: The book of Isaiah among these scrolls is 1,000 years older than any other previously known copy!) Considering the Essenes were so isolated and reclusive, these texts must have originally been composed long before these dates in order for them to have time to filter down to communities like these. This discovery alone means that at least most of the Hebrew Bible must have been written sometime before the second century b.c.e.

The Torah—traditionally attributed to Moses, c. 15th century b.c.e.—has been placed by minimalists 1,000 years later, after the captivity of Israel. The Bible is quite clear that the Torah was “penned” at the hand of Moses (e.g. Exodus 17:14, Numbers 33:2, Deuteronomy 31:9). Minimalists are quite clear that it was not. Who are we to believe?

The archaeological evidence that lends itself to dating this text is not extensive. But what we do find is very interesting.

During archaeological excavations on the edge of the Valley of Hinnom, not far outside ancient Jerusalem’s walls, a large treasure cache was found in a burial tomb by the team of Prof. Gabriel Barkay. More than a thousand objects were found. Most significantly were two little metal scrolls, made of 99 percent pure silver. These scrolls were painstakingly opened in a laboratory, and were found to contain portions of Scripture, notably from Numbers 6:24-26 and Deuteronomy 7:9.

… the great … [who keeps] the covenant and graciousness toward those who love [him] and those who keep [his commandments …].

The Eternal … blessing more than any … and more than evil. For redemption is in him. For Yahweh is our restorer [and] rock.

May Yahweh bless you and keep you. [May] Yahweh make [his face] shine …

… the faithful God, who keepeth covenant and mercy with them that love Him and keep His commandments … (Deuteronomy 7:9)

The LORD bless thee, and keep thee; The LORD make His face to shine upon thee, and be gracious unto thee … (Numbers 6:24-25)

May [he/she] be blessed by Yahweh; The warrior/helper and the rebuker of evil:

May Yahweh bless you and keep you; May Yahweh cause his face to shine upon you and grant you peace.

The LORD bless thee, and keep thee; The LORD make His face to shine upon thee, and be gracious unto thee;… and give thee peace. (Numbers 6:24-26)

King Josiah was on the scene during the middle of this seventh century b.c.e. 2 Chronicles 34 describes the Torah—or at least the book of Deuteronomy—as having been lost, and rediscovered at this time. This led to a great reawakening of religion in Judah. This passage explains that the Torah had already been long on the scene; perhaps it was only after finding the Torah scroll that the passages were able to be reincorporated into services such as this funeral. From this, we can see that choice passages were picked from an existing compilation of scripture, during the seventh century b.c.e., in order to use them for funerary purposes. This is much earlier than when they “should” have been written—particularly the Numbers portion, which shouldn’t have been on the scene for another hundred-plus years.

Another discovery—this one dating to the 10th century b.c.e.—reads very similar to other biblical passages, especially one from Exodus. The find was that of a pottery shard with ancient Hebrew text written on it. While the text does not specifically match any biblical text, it shows a general understanding at that time of the same principles and wordage. It can also be linked with other biblical writings, outside of the Torah. Known as the Khirbet Qeiyafa ostracon, this is what is says (alongside some examples of similar biblical passages):

And a stranger shalt thou not wrong, neither shalt thou oppress him; … Ye shall not afflict any widow, or fatherless child. (Exodus 22:20-21)

Judge the poor and fatherless; Do justice to the afflicted and destitute. Rescue the poor and needy; Deliver them out of the hand of the wicked. (Psalm 82:3-4)

There are numerous other evidences for an early, traditional date of writing for the Torah. These come especially from a textual examination. The Torah is written in very early Hebrew style—it would have been a remarkable feat for a late postexilic fraud to forge such writing. Furthermore, any late authors would have had to have an extraordinary knowledge of life and customs during the early periods, through Abraham’s time and up to Moses and Joshua. Through archaeology, we are only now discovering the myriad of ancient customs unique to that time period.

Take, for example, the early references in Genesis regarding a handmaid being given as a wife. This was an accepted early practice during Abraham’s day—if a wife was not able to bear children for the husband, a handmaid could be taken in to produce an heir. This tradition fell out of use, however, in the later periods. The writer must have somehow known about this custom for this time period. Along similar lines, there was the ability to sell one’s birthright and to claim a wife as a sister (mentioned three times: twice by Abraham and once by Isaac)—anciently, wives could be legally made “sister” in order to have more rights. How were late writers to know of these traditions and use them in just the right time period?

Take also the references in the Torah to the pharaohs. They are never named—much to the chagrin of historians. Yet throughout the later books of the Bible, the pharaohs are named. This early omission of the pharaohs’ personal names was in keeping with the tradition of the time period. Pharaohs were referred to by their god-like title—not by their personal names. Yet later on, Israel was free of Egyptian captivity and traditions—and hence we see a referral to pharaohs by their names. How could post-captivity ghostwriters have known this tradition, and omitted the names, as well as then accurately bring them in at just the right time period for the later biblical books?

Another reference: When the fleeing Israelites desired to return to Egypt and the food they received there—specifically, the “leeks and the onions” (Numbers 11:5). An Egyptian pyramid inscription records “onions and leeks” being fed to the workmen. How were late writers to know of the dietary habits of workmen and slaves in Egypt?

Furthermore, the Torah accurately reflects the political situation of the time period—as confirmed by archaeology. Certain lands are described by their original early names. The Torah correctly portrays the original strength of the Babylonian and Assyrian empires up to Abraham’s day. It correctly portrays a turn of power toward a strong Egypt during the 18th to 15th centuries b.c.e., projecting power into Canaan. It correctly portrays the Hittite Empire’s expansion of power into Canaan, and accurate portrayals of the kingdoms of Moab and the Philistines. It accurately portrays early 14th-century Canaan, which was being overrun and totally conquered by “nomadic Habiru”—surely an allusion the Hebrews’ conquest of the Promised Land recorded as having happened at the same time. These are all specific, finicky details that ghostwriters would not have had knowledge of during their supposed postexilic time of writing.

The main hypothesis for a late writing of the Torah, by many authors, is what is known as the Documentary/JEPD Hypothesis. “J” stands for the authors who preferred to use God’s name “Jahweh.” “E” stands for the authors who preferred to use “Elohim.” “P” stands for the priestly writers, and “D” stands for the Deuteronomy writers. There is not enough space to cover this theory fully here—and no real need. Because it certainly doesn’t account for all the special and specific textual references described above. Even the discovery of the Ketef Hinnom scrolls helps disprove this theory. According to the hypothesis, the portion of Numbers recorded on this scroll wasn’t supposed to have been written by the “P source author” until over 100 years later.

This also creates some moral dilemma. Because the same authors writing the famous commandment “Thou shalt not bear false witness” (Exodus 20:16; Deuteronomy 5:20) would have then “borne false witness” by writing repeatedly that Moses wrote the Torah (e.g. Exodus 17:14; Numbers 33:2; Deuteronomy 31:9). And it would throw under the bus the rest of the biblical books and authors that say likewise (e.g. Joshua, Judges, Kings, Chronicles, Ezra, Nehemiah, Daniel, Malachi).

If you would like more information, Craig Davis goes into great detail providing thorough evidence utterly disproving the Documentary Hypothesis in his book Dating the Old Testament (see here). This fantastic lengthy book goes through far more detail proving an early date for the Torah. The book actually covers the entire Hebrew Bible, providing convincing textual and archaeological evidence for each book having been written exactly when it says.

It Only Makes Sense

As it turns out, there is significant evidence to say that it only makes sense for a very early writing of the Torah. Those who try to parse it are doing so with no real evidence to go on. There is nothing to say that the Torah couldn’t have been written during the 15th century b.c.e. by the hand of Moses. And there is a lot that says it should have been.

Interestingly, the ancient, detailed “holy” writings of the Assyrians and Babylonians have been accepted—highly complex writings preserved in great detail—from a composition date before 2000 b.c.e. Why the constant arguments for such a late date of composition for the great Hebrew literature—particularly around the fifth century b.c.e. (post-captivity) or later? Were the Israelites so backward that it took that long for their already well-established civilization to produce a collection of treasured works?

Of course, believing the literal account, and that the Torah was written by the hand of Moses, means believing in divine inspiration. And that is a step way too far for the critics. It seems that no amount of archaeological evidence—at least found thus far—can change that.

But as time goes on, the evidence continues to mount for the early, traditional authorship of the Bible. We’ll see that as we continue our series, looking next at the second part of the Tanakh: the Prophets.