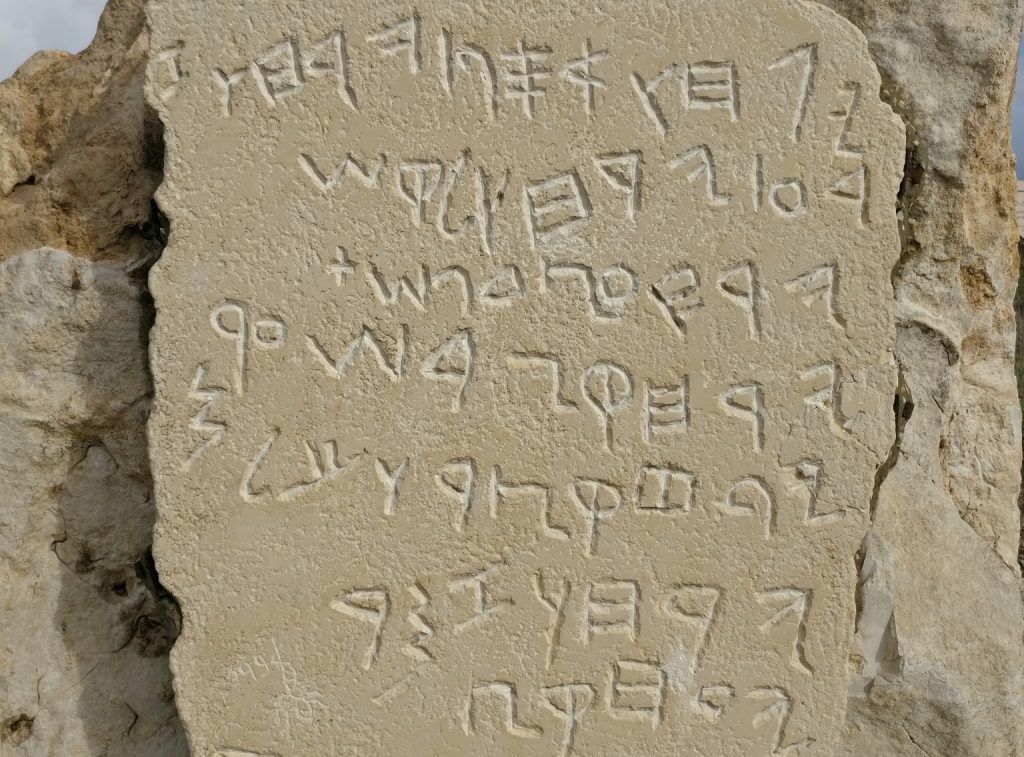 Replica of the Gezer Calendar
AIBA

This powerful stronghold stood at the picturesque edge of the foothills of the Judean mountains, guarding a large swathe of the western kingdom of Israel. It was the very first mound of an ancient Israelite city positively identified by inscriptions. It was a site of Canaanite cult worship up to and during the time the Israelites inhabited the Promised Land. And it was one of King Solomon’s great royal cities, specially gifted to him by an unusual father-in-law—the pharaoh of Egypt. Let’s dig into the history of this amazing archaeological site.

Gezer was already richly developed long before the Israelites came upon the city. Pagan worship was rife, with evidence of child sacrifice discovered within the city. In the center of Canaanite Gezer was a large ritual area, with 10 massive standing stones placed in a row, the tallest reaching over 3 meters (10.5 feet). A large carved stone basin sat in the middle of the row of stones.

Gezer was heavily built up during the Middle Bronze Age (around 2000-1500 b.c.e.). A strong stone gate with brick superstructure was built into the city. Large, 4-meter (13-foot) blocks of stone were used to construct the wall. During the ensuing years, an impressive outer wall, 4 meters thick and 1,100 meters (3,600 feet) long, was constructed around the city.

Around 1470 b.c.e., Egypt conquered Gezer. A number of inscriptions and the widespread destruction found on the site attest to this dominance. During this period of Egyptian control, around 1400 b.c.e., the leaders of Canaan wrote the Amarna letters, pleading with Egypt for help against the invading Habiru nomads. (These Habiru and their connection with the Hebrews entering Canaan have been explained in detail in previous articles.) Gezer joins the list of cities calling for help. The following excerpts are from three different letters from Gezer:

May the king, my lord, be informed that my younger brother, having become my enemy, entered Muhhazu and pledged himself to the Habiru. As Tianna is at war with me, take thought for your land ….

Gezer was subsequently taken by the Habiru. This is evidenced by a letter from Canaanite Jerusalem to Egypt, also pleading for help:

Consider the lands of Gazru [Gezer], Asqaluna [Ashkelon], and L[akis]i [Lachish]. They have given them food, oil and any other requirement. … Consider the deed! This is the deed of Milkilu [ruler of Gezer] and the deed of the sons of Labayu, who have given the land of the king to the Habiru ….

This was especially problematic, because Gezer was designated as a location for the Levites of the line of Kohath (remember, the tribe of Levi wasn’t given its own territory, but instead cities within other tribes to live). One of these cities given to the Levites, from Ephraim, was “Gezer with her suburbs” (Joshua 21:21; King James Version). For the leading religious class of Levites to dwell with and alongside the pagans of the city would have been a terrible situation. Perhaps the Levites were forced to live further out in the “suburbs,” while the Ephraimites allowed the Canaanites pride of place within Gezer.

During the 13th century b.c.e., Egypt conquered Gezer. Evidence of this is shown on the Merneptah Stele, a large victory stone on which Pharaoh Merneptah boasts his many military successes. Toward this bottom of this stele reads the following:

Canaan is captive with all woe.
Ashkelon is conquered, Gezer seized,
Yanoam made nonexistent;
Israel is wasted, bare of seed ….

Here we have our reference to Gezer. But what is even more interesting is that the mention of “Israel” is the earliest extra-biblical reference to the name known (aside from another debated reference). It shows that during this time of the judges, the country was already known and established under its patriarchal nation-name.

So Egypt ravaged through Gezer and other parts of Israel. We know that Israel flip-flopped in and out of paganism and ensuing slavery during the time of the judges. While there is no mention of a specific Egyptian invasion in the book of Judges, some of the judges listed reigned with no aggressor specifically listed. The attacks could have occurred during the time of Abimelech (Judges 9) or judge Tola (10:1-2). Whatever may have transpired during those turbulent times, it wasn’t long before Gezer was again conquered—this time by the Philistines.

Philistine Rule—and Back to Egypt

In the 12th century, the Philistines conquered Gezer and made their presence known throughout Israel. This time period is contemporaneous with the emergence of the judge Samson and his well-known struggles against the Philistines (Judges 13-16). “And the children of Israel again did that which was evil in the sight of the Lord; and the Lord delivered them into the hand of the Philistines forty years” (Judges 13:1). The archaeology at Gezer shows much Philistine pottery dating to this period.

During King David’s reign, the Philistines still apparently retained control of Gezer. “And it came to pass after this, that there arose war at Gezer with the Philistines; then Sibbecai the Hushathite slew Sippai, of the sons of the giants; and they were subdued” (1 Chronicles 20:4). Yet even after this war and the death of the giant at Gezer, the city remained in the hands of foreign occupants. It would take an unlikely ruler to bring the stubborn city under full Israelite rule—a pharaoh of Egypt.

From Egypt, With Love

Solomon assumed the kingship of Israel after his father David. One of his first acts of “foreign diplomacy” was to marry the daughter of Egypt’s pharaoh (1 Kings 3:1). Relations with Egypt were thus on a high, as the following verse reveals:

“For Pharaoh king of Egypt had gone up, and taken Gezer, and burnt it with fire, and slain the Canaanites that dwelt in the city, and given it for a present unto his daughter, Solomon’s wife” (1 Kings 9:16; kjv).

Just what every daughter secretly wants—a conquered city! Nonetheless, that is what she got—and finally we see, through archaeology and the Bible history, Gezer developed as an Israelite fortress.

And this is the account of the levy which king Solomon raised; to build the house of the Lord, and his own house, and Millo, and the wall of Jerusalem, and Hazor, and Megiddo, and Gezer.

This verse has been fully explained in earlier articles on Lachish and Megiddo. Dating to Solomon’s reign, the same architectural features have been found at Hazor, Megiddo and Gezer (and possibly Jerusalem)—the six-chambered gates. These gates show that a strong, unified government must have been present in order to standardize the construction of these gates across Israel—helping to prove Solomon’s powerful and wealthy rule as king. This is contrary to the opposing belief that Solomon, if he existed at all, was just a small-time hilltop chieftain.

Yet poor Abijah, and Gezer as a whole, wouldn’t enjoy much freedom before Gezer was hammered once again.

Around 925 b.c.e, Gezer functioned under the control of the separated northern kingdom of Israel, right on the border with the kingdom of Judah (under Solomon’s son, Rehoboam). It was at this time that King Shishak of Egypt (identified as Pharaoh Shoshenq i) wreaked havoc on the Kingdom of Judah (2 Chronicles 12:1-10), and evidently swept into some of the northern kingdom’s cities as well. As the archaeological record shows, Gezer did not escape. The city would have been conveniently close for Shishak to attack while conducting his war against the southern kingdom. Yet as with Jerusalem, after overcoming the city, the Egyptians departed, and Israelites continued to live within Gezer through the subsequent centuries.

By the time the late eighth century rolled around, nearly 200 years after Shishak, King Tiglath-Pileser iii of Assyria began his campaigns against Israel, destroying city after city. His was the campaign mentioned in 2 Kings 15:29. Around 733 b.c.e., he overthrew Gezer. This time, the Israelites of the conquered northern kingdom were not allowed to remain in the land, but were forcibly extradited to Assyria, and replaced with a people that would become known as the “Samaritans” (2 Kings 17:23-29).

This siege of Gezer was actually depicted on a stone wall relief in the royal Assyrian palace at Nimrud. The monument shows Gezer (identified as Gazru) under attack by battering rams, with Israelites surrendering from the city walls. Like the similar depictions of Sennacherib’s attack on Lachish, the images offer a glimpse into what the city must have experienced during this terrifying attack.

After the destruction by Tiglath-Pileser, Gezer became an Assyrian administration city, before coming under the control of the southern kingdom of Judah.

Gezer to the Present Day

After the Kingdom of Judah was taken over by the Babylonians, Gezer changed hands between the various occupying powers of the region. It made up a portion of the Persian province, Yehud. The city then came under Ptolemaic rule during the Hellenic period. After which came the Maccabean rebellion; in 142 b.c.e., Simon the Hasmonean attacked and conquered Gezer, subsequently building a palace onsite. Both he and his son John Hyrcanus (who would also become a Maccabean king after him) resided there.

Dating either up to or during the Herodian period, interesting “boundary marker” rocks were found around Gezer. On these were inscribed the words “Boundary of Gezer” in both Hebrew and Greek. Thirteen of these markers have been found. It is thanks to these inscriptions that Gezer was the first Israelite city-mound to be positively identified by inscriptions. There was no doubt that this mound was the Gezer of the Bible.

Today, Gezer is finally, once again, under the control of Israel. But just as it was in the ancient times of this stubborn fortress, Gezer did not return easily to Israel. On June 10, 1948, during the War of Independence, nearby Kibbutz Gezer was besieged by Arab Legionnaires equipped with seven armored cars and supported by irregulars. The battalion was led by an independent British officer, Nigel Bromage. In his memoir he wrote: “While I was still at Ramle, I decided that as a diversion, and without the authority of the Brigade, I would destroy the Israeli colony at Qeezer [Gezer], which overlooks the main road to Jerusalem ….” Sixty-eight Israeli soldiers within the kibbutz (13 of whom were women) fiercely attempted to fend off the attack, yet after four hours of fighting, 39 of them had been killed and Gezer fell to the Arab forces. About a dozen soldiers escaped, and one or two were executed. The occupation did not last long, however, as that same night, after the Legionnaires had left control of Kibbutz Gezer to the irregulars, the territory was recaptured by the Israeli Yiftach Brigade.

Today, the land of Gezer is at peace. Residents live alongside the ancient mound in a quiet, picturesque community. The fortress mound of Gezer itself is an archaeological park under regular excavation. The ancient area that so often changed hands throughout history sits, for now, at rest.