Where is Biblical Ai? 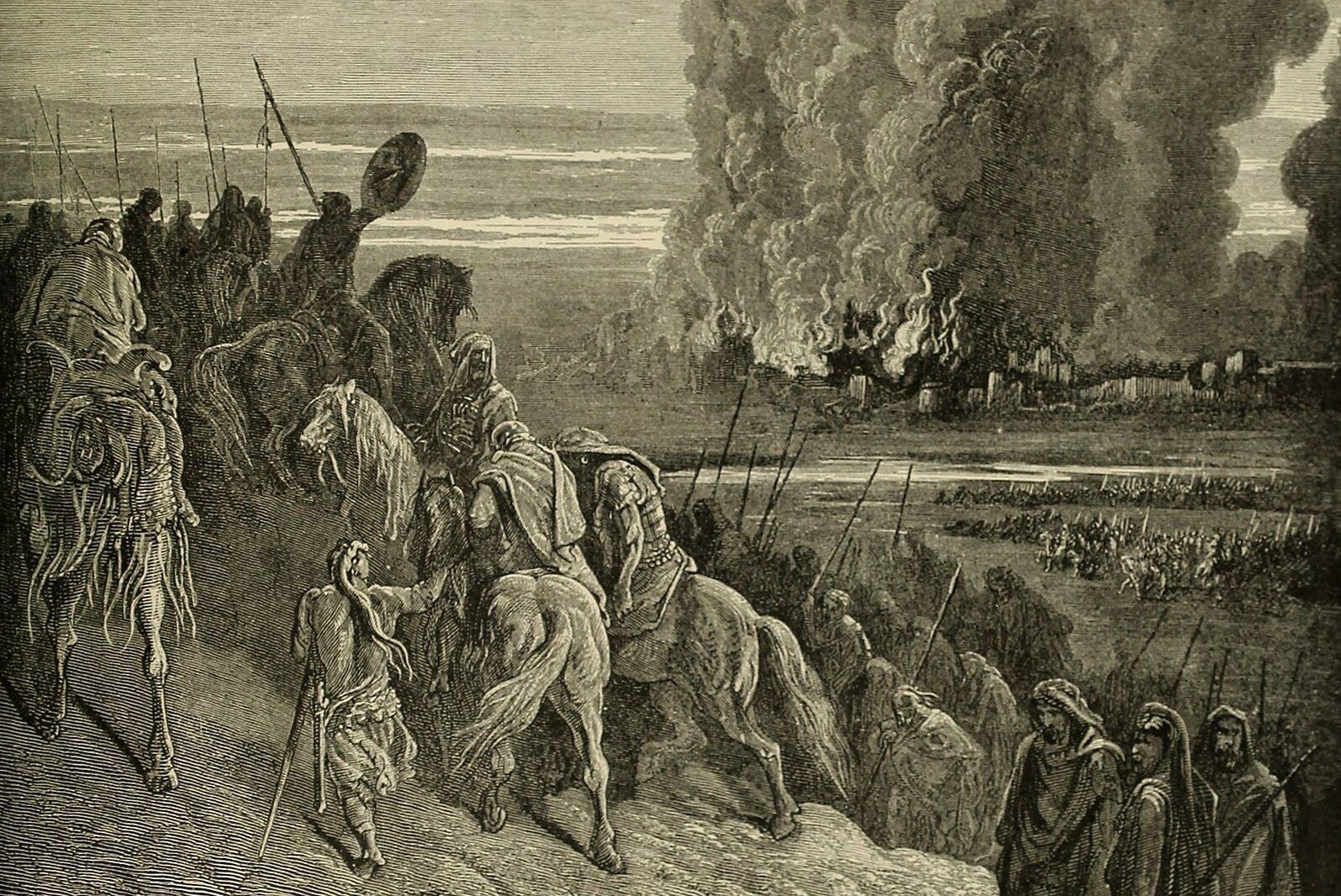 “Joshua Committing the Town of Ai to the Flames” (Gustave Doré, 1891)
Public Domain

The siege of Jericho, and the walls that came “tumbling down,” is one of the especially well-known miraculous events described in the Bible (one for which there happens to be some rather remarkable archaeological evidence.) Shortly after this siege, Joshua and the Israelites set off toward a Canaanite stronghold whose location was the next logical step in opening up a campaign in southern Canaan. This stronghold was Ai. Though smaller than Jericho, it proved to be far more difficult for Joshua and his army. The first attempt to take Ai ended in failure, with 36 men out of 3,000 being killed and the remainder fleeing for their lives.

After dealing with a sin in the camp of Israel (the “sin of Achan,” of stealing an “accursed thing”), an infraction that had caused Israel’s defeat, Joshua once again set out to take the city. With 30,000 men, he cleverly drew the boastful defenders of Ai north out of their city gate, and then a contingent of Israelites—who had been hidden in a valley to the west—captured the city, at which point the soldiers of Ai were surrounded and destroyed. Joshua 8:28 says, “So Joshua burnt Ai, and made it a heap for ever, even a desolation, unto this day.”

Almost two entire chapters of the book of Joshua are dedicated to the story of the conquest of this city, providing specifics about Joshua’s tactics, as well as several waymarks for the location of Ai geographically. Yet there has been a lot of difficulty surrounding the identification of the location of, and even the existence of, Ai.

The very first book of the Bible, Genesis, mentions Ai. Abraham built an altar to God between Bethel and Ai (Genesis 12:8). In addition to showing that Ai was an inhabited city during the patriarchal period, this passage shows that Ai and Bethel must have been relatively close to each other. Joshua likewise makes it clear that these two cities were proximate. As such, the two main proposed sites of Ai are both quite close to the site of Bethel, only about 1 kilometer (0.6 miles) away from each other.

The majority of scholars and archaeologists today agree that ancient Bethel was located in a village that is today called Beitin. This is largely based off of an account written by Eusebius, who recorded Bethel’s distances from Jerusalem and Shechem. Excavations have confirmed that there was an ancient city in Beitin, which was inhabited from about 2000 b.c.e. up until the Byzantine period. Some debate that Bethel is actually the modern village of El-Bireh, which is just south of Beitin. Either way, we know that Ai was near these two villages.

Since the 19th century, Ai has been popularly identified with a place called et-Tell, largely due to the identification work of Edward Robinson and W. F. Albright. Both in Hebrew and in Arabic, et-Tell simply means “ruin heap.” The Bible makes it clear that Ai should be just east of Bethel. Edward Robinson, in exploring the area in 1838, looked east from Beitin and noticed one prominent hill which he supposed to be the site of Ai. That hill was et-Tell, about 3 kilometers east/southeast of Beitin. Though there was some degree of debate about this in the 19th century among other explorers, to many, this hill seemed like the most probable location of Ai. The late great “father of biblical archaeology,” W. F. Albright, supported the idea in an article published in 1924. As other potential sites were disproven, acceptance of et-Tell became prevalent.

A decade after Albright’s article of support, one huge problem with et-Tell was exposed. Excavations led by Judith Marquet-Krause in 1935 showed that et-Tell was a substantial city in the early Middle Bronze Age, but was destroyed by fire c. 2100 b.c.e. Later, during the Iron Age i period (1200–1000 b.c.e.), the ruins were once again reoccupied, but they were not fortified. This discovery came as a surprise to the archaeology community: The period in which et-Tell should have been the occupied, functioning city Ai (1400s b.c.e. according to the early-Exodus view, 1200s b.c.e. according to the late-Exodus view—see here for more detail on this debate) was simply not there.

Later archaeologists at the site corroborated Marquet-Krause’s discoveries—again, with no evidence of habitation for the period of the patriarchs or Joshua. This meant that if et-Tell truly was Ai, then when Abraham built his altar near Ai, no one lived there, and when Joshua and the Israelites entered the Promised Land, there was no city for him to conquer, as the Bible describes.

For some, this was taken as proof against the Bible’s account of Joshua’s conquest; either that, or as reason to change details in order to make the narrative fit with discoveries at et-Tell. Albright posited that the story was therefore about the conquest of Bethel, not Ai, and that Ai was simply used to describe its ruins, because there was surely no other possible site for Ai than et-Tell. Martin Noth considered this another made-up story from the book of Joshua. Joseph A. Callaway, who excavated et-Tell in the 1960s and ’70s, wrote: “Archaeology has wiped out the historical credibility of the conquest of Ai as reported in Joshua 7–8.” Marquet-Krause, in a publication about the 1935 excavation, wrote, “This leads us to believe that chapter vii and viii of Joshua, that could be assumed to be historical, are part of a legend … but a legend that is based on a real place.”

End of story? Not quite.

With the identification of Ai as et-Tell, there was one fundamental flaw from the very beginning. Joshua 10:2 says that Gibeon was larger than Ai (“Gibeon was a great city … greater than Ai”). The ruins of Gibeon are well known (Al Jib), and they indicate that Gibeon was only about half the size of et-Tell. This would therefore infer the diametric opposite of Joshua 10:2—that it was Ai that was far “greater than” (Hebrew meaning “larger/bigger than”) Gibeon.

So, is there any alternative option that better fits?

For 60 or so years, no other good alternatives were presented—until 1995. At this time, another site was put forward as the possible location of Ai. It was a relatively small site, just west of et-Tell, called Khirbet el-Maqatir. It was originally excavated by Dr. Bryant Wood, and more recently by Dr. Scott Stripling.

Khirbet el-Maqatir itself means “the ruin of the place of the rising of sacrificial smoke.” Joshua 8:20 specifically brings attention to the plume of smoke that arose from Ai. Pottery and structures at this site show signs of having been ravaged by fire. This is significant, as the only three cities, according to Joshua, that were burned in this conquest were Jericho, Ai and Hazor. The latest pottery at the site was from around 1400 b.c.e., roughly the time of Joshua’s conquest (according to the Bible-literal, early Exodus/conquest date), so the chronology of the site makes sense in this respect.

Khirbet el-Maqatir fits several geographic requirements as the site of Ai. It is east of Bethel, as Joshua 7:2 describes. The narrative indicates that the gate of the city would have faced north, and there would have been a shallow valley north of the city to which Joshua brought the defenders of Ai out to fight—both features extant at Khirbet el-Maqatir. About 1.4 kilometers (0.9 miles) north of Khirbet el-Maqatir is the highest hill in the region, with an excellent view of the city and the valley, which could have served well as the location in which Joshua stood as he oversaw the entire battlefield. To the west of Ai, there needed to be a deep valley in which a contingent of Israelites could hide—and just such a valley exists on the west side of Khirbet el-Maqatir. Also, unlike et-Tell, this site is far smaller than the ruins of Gibeon, thus befitting Joshua 10:2. Khirbet el-Maqatir also has a view of Jerusalem (the dominant city of southern Canaan during Joshua’s invasion) some 16 kilometers (10 miles) south, which would explain why it was such a strategic city to conquer to open up Joshua’s southern campaign.

The proposal of Khirbet el-Maqatir seems convincing. On an archaeological timescale, the theory is still quite young, and naturally has not yet been universally recognized. Hopefully further excavations will continue at the site, revealing more concrete evidence. Still, the identification certainly appears promising—certainly more so than that of et-Tell.

The story of locating Ai is another account not of archaeology proving the Bible false, but of the dangers in overemphasizing the identification of uncertain locations that are highly open to interpretation. Archaeologists have for decades used the story of Ai, in various forms, to ridicule the historical authenticity of the Bible during this early conquest period. Yet, thanks to ongoing excavation work, the story of Ai and its identification is not over, but continues to unfold in ever-growing clarity—attesting to a genuine, historical account relayed by the Bible.