The finds that caught our eye
By Armstrong Institute Staff • December 26, 2018 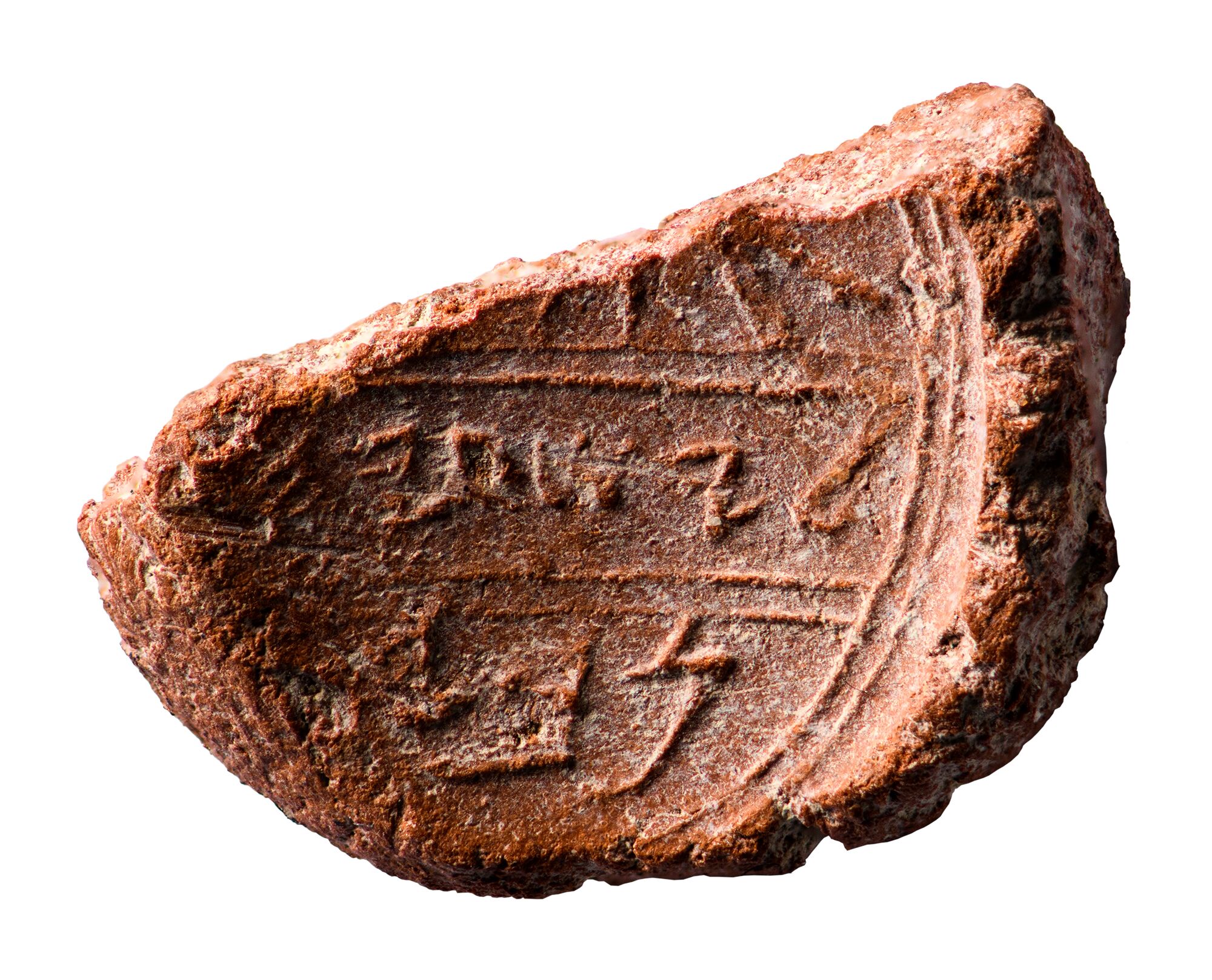 Numerous exciting archaeological discoveries were made in 2018. These included a number of biblically significant artifacts—and we have put together a list of our top finds for the year. They are the following:

This is the single greatest item of 2018—and surely, one of the greatest discoveries in a long time. Although this seal impression was revealed to the public in 2018, it was unearthed in 2009. But the full significance of it wasn’t realized until 2014, and then intensive research began. This long period before release is due to the damaged nature of the inscription. The bulla reads (damaged parts in brackets):

Belonging to Isaiah [the] Prophet

Some degree of debate has raged as to whether or not this bulla really did belong to Isaiah the prophet—while this identification is by far the best fit, some have argued that the bulla may have belonged to someone else, due to the word “prophet” having been damaged at the end. (Only Navi is preserved, not the full Navi’. However, a close reexamination of the bulla appears to show the final letter after all.)

This bulla is particularly special because it was found alongside the bulla of King Hezekiah; Isaiah and Hezekiah are featured together repeatedly in the Bible. Further, the discovery has a special place in our hearts here at the Armstrong Institute of Biblical Archaeology (aiba)—it was excavated by one of our own staff (albeit at the time, unwittingly) during our support for Dr. Eilat Mazar’s 2009–2010 Ophel excavations.

The organization behind aiba has been loaned both the Isaiah and Hezekiah bullae, which are now on display in our premiere exhibit in Edmond, Oklahoma. You can view the online exhibit, “Seals of Isaiah and King Hezekiah Discovered,” here; or if you are in the area and would like to visit the exhibit in person, visitor details are here (the exhibit is free). If you’d like a free full-color brochure of the exhibit, simply request it be mailed to you or download it here.

For more information about the remarkable bulla itself, take a look at our press release here.

‘Fire from Heaven’ Destruction of Sodom and Gomorrah Confirmed

The Bible claims that the debauched cities Sodom and Gomorrah were destroyed by fire from heaven. Now, so too does archaeology. Scientists have now found evidence that a great, literally heavenly destruction really did rain down upon the land.

Excavations at Jordan’s Tall el-Hammam (a contender for the location of biblical Sodom) have revealed utter fiery destruction and an instantaneous end of a once-flourishing civilization, dating roughly to the 1700s b.c.e. Mud brick structures were found to have suddenly disappeared, leaving burned stone foundations. Bricks that were found showed signs of incineration. Clay pottery fragments had melted into glass. Zircon crystals in the pottery, upon analysis, were shown to have formed within one second, the result of superheating to temperatures perhaps as hot as the surface of the sun. A “tidal wave” of boiling hot salt had swept over the land. There was evidence that mineral grains had rained down, carried by scorching, high-force winds. The estimated regional population of 40,000 to 65,000 people would have been killed instantly by the strange event. Ash and debris, several feet thick, were left behind within the wider 500-square-kilometer area of destruction—a scene of biblical carnage. Excavation director Prof. Phillip Silva presented his team’s discoveries this year in a detailed analysis, “The 3.7kaBP Middle Ghor Event: Catastrophic Termination of a Bronze Age Civilization“ (abstract here). So what caused such a catastrophe?

The Tall el-Hammam scientists, led by Silvia, have estimated that the scene of devastation was caused by an exploding meteor. They base this model off a massive airburst that occurred in 1908 in Siberia, leveling 2,000 square kilometers of forest, yet leaving no crater. The Tall el-Hammam scientists posit that a similar heavenly airburst (with a yield of around 10 megatons) must have occurred c. 3,700 years ago, causing a dramatic fireball, a superheated air blast, and a fallout that wiped out the surrounding region below.

While scientists debate whether or not it was caused through a meteor-type event or some other kind of heavenly phenomena, what is not debatable is the chaos it left behind. And that chaos directly parallels the biblical event—in location, time and description. Our full article on this incredible subject will be posted shortly.

Discoveries this year at Tel ‘Eton—believed to be the biblical site of Eglon—have yielded further proof of the biblical account of David’s kingdom. aiba readers will be familiar with the debate that has raged over the past several decades as to whether or not King David was a genuine historical figure and if he really did rule over a strong kingdom. Many academics have assumed that Israel only became a somewhat-powerful kingdom well over a century after David and Solomon—if they even existed.

Tel ‘Eton, on the southeastern edge of ancient Israel’s territory, was shown to have construction dating to the very time period of King David, including a construction-type unique to Israel—the four-room house. This (in similar fashion to Solomon’s “six-chambered gates”) shows evidence of a central authority emanating from Jerusalem, with standardized housing throughout the kingdom. The city is a new thorn in the side for biblical minimalists, as it shows that the Judean highlands-based kingdom controlled much more territory than is credited. Discoveries from this outpost city fit with the biblical description of a continually expanding kingdom during the reign of King David.

After Jerusalem and Khirbet Qeiyafa, Tel ‘Eton is the third major archaeological site that has been linked to King David. More information on the site can be found here.

Dr. Scott Stripling, along with a massive team of excavators, completed their second season of excavation at Tel Shiloh this year. Shiloh is well known as having been the location of the Israelite tabernacle for some 400 years, before the temple was constructed in Jerusalem.

One of the team’s most exciting finds has been that of a small white ceramic pomegranate, a few centimeters in length, bored through at one end in order to be hung from a string. The pomegranate is a well-known motif that featured in Israelite tabernacle and temple worship. The high priest would wear a string of small bells and pomegranates on his outfit. This small pomegranate, then, may have been used on the high priest’s clothing or for some other such religious decoration.

One of the chief excavators of Shiloh, over the past several decades, has been Prof. Israel Finkelstein—a notable biblical minimalist and skeptic. He claimed that Shiloh was used primarily as a Canaanite cultic site, attributing the mass of sacrificial remains at Shiloh to the Canaanite inhabitants. Since his digs, however, others have also excavated the site, presenting conclusions contrary to Finkelstein’s claims (including pointing out the fact that sacrificial remains happen to be from kosher animals). The recent discovery of the pomegranate, among other items, fits with the biblical description of the site as an early Israelite center of worship and site of the tabernacle.

You can find the Associates for Biblical Research’s news release of the pomegranate here. Further excavations are scheduled to take place at Shiloh in the summer of 2019.

This year’s excavations at Bethsaida have uncovered a massive 3,000-year-old city gate that was in use during the period of King David’s rule. According to excavation codirector Prof. Rami Arav, the 3-meter-high gate is the “largest and the best-preserved city gate” in Israel.

This city site, just north of Galilee, was the capital of the Aramean Geshurites. During David’s reign, they were ruled by King Talmai, whose daughter, Maachah, became one of David’s wives. Maachah gave birth to David’s son and later opponent, Absalom. Maachah would have been familiar with these Geshurite city gates (and as Arav postulated, perhaps King David even walked through them to claim his wife).

Together with the massive gate, a large section of wall was uncovered by the excavators, the earliest known to contain guard towers. These were spaced at 20-meter intervals. A palace at the site has also been discovered. More can be read about this site here.

This has to be one of the most visually enthralling artifacts of the year. It is a figurine head that was discovered in the far north of Israel, at the site of Abel Beth Maacah (bordering Syria and Lebanon). Despite its 2,900-year age, the colors on the 5-centimeter faience head are still beautifully preserved.

Due to the far northern location of this site, it isn’t clear whether Abel Beth Maacah was under Israelite, Syrian or even Phoenician control when the sculpture was made. Thus, there are a few theories about whom this head represents—namely Israelite kings Ahab or Jehu, Syrian kings Ben-Hadad or Hazael, or Tyrian king Ethbaal (father of Jezebel).

In my article on this find, I favor the link with King Jehu based upon similarities with the “Jehu” depiction on Shalmaneser’s Black Obelisk. You can read about that, and more about the artifact in general, here.

There are a number of other discoveries made this year that deserve special mention, but that aren’t necessarily biblical. At the start of the year, during our excavation efforts on the Ophel (again, led by Dr. Mazar), news broke around Passover of a large trove of coins we uncovered in a cave, dating to the time of the Jewish Revolt—particularly, coins that had been minted during the final year of that revolt, Year 4 (c.e. 70). These coins make up one of the largest—if not the largest—Year 4 assemblages ever found. (These are quite rare coins—again, due to their proximity with the end of the Roman siege.) It was during this final stage of rebellion that the inscription on the Revolt coins notably changed, from “Freedom of Zion” to “For the Redemption of Zion.” You can read about that discovery here.

The “Jerusalem Stone” artifact was also discovered this year, bearing the rare, “full” form of the name “Jerusalem.” The inscription is emblazoned across a stone pillar, bearing the name of a man believed to be a village artisan (“Hananiah, son of Dodalos, of Jerusalem”). Dating to c. 100 b.c.e., the spelling for “Jerusalem” mirrors the modern form. In the Bible, it is only spelled this way five times (out of over 660 references to the city). You can read about this artifact here.

These are just a short selection of the exciting artifacts discovered during 2018. Beyond that, 2018 has been a big year for aiba, chiefly in sponsoring and staffing Dr. Mazar’s three-month Ophel excavations, as well as constructing the world-premiere “Seals of Isaiah and King Hezekiah Discovered” exhibit. This exhibit opened with a grand reception held jointly at Jerusalem’s King David Hotel and Armstrong Auditorium in Edmond, Oklahoma, with presentations given by former Ambassador Michael Oren, Dr. Eilat Mazar and aiba Founder Gerald Flurry.

We’ve also produced a number of articles this year on already-existing artifacts and other archaeology-based subjects. Subjects like the scientific evidence behind Adam and Eve (there’s actually quite a lot); the biblical longevity of the ancients; the “cultural universals” that make us humans so different from the animal kingdom—marriage, language, clothing, and music; and Israel’s invasion of Canaan: Did it actually happen, and was it really a case of helpless “evil imperialists” vs. “helpless natives”? We also wrote on the present-day archaeological “battlefield”: The continuing saga to excise Kings David and Solomon from history; and the EU’s aim to take us, and other Jerusalemite archaeologists, down—to “hush up” the history of the Holy City.

To see our “tops” list from 2017, click here; for 2016, click here. We look forward to seeing what 2019 brings. Thus far (to the disappointment of biblical minimalists and skeptics), archaeology has yet to yield a single, honest shred of evidence disproving the Bible. What it has done is disprove people’s misconceptions about what the Bible says. Over the past millennia, including 2018, we have seen the Bible validated, illustrated and clarified. We expect more of the same in 2019.