Ophel excavation yields only the third such coin ever found in Jerusalem.
By Christopher Eames • December 12, 2022 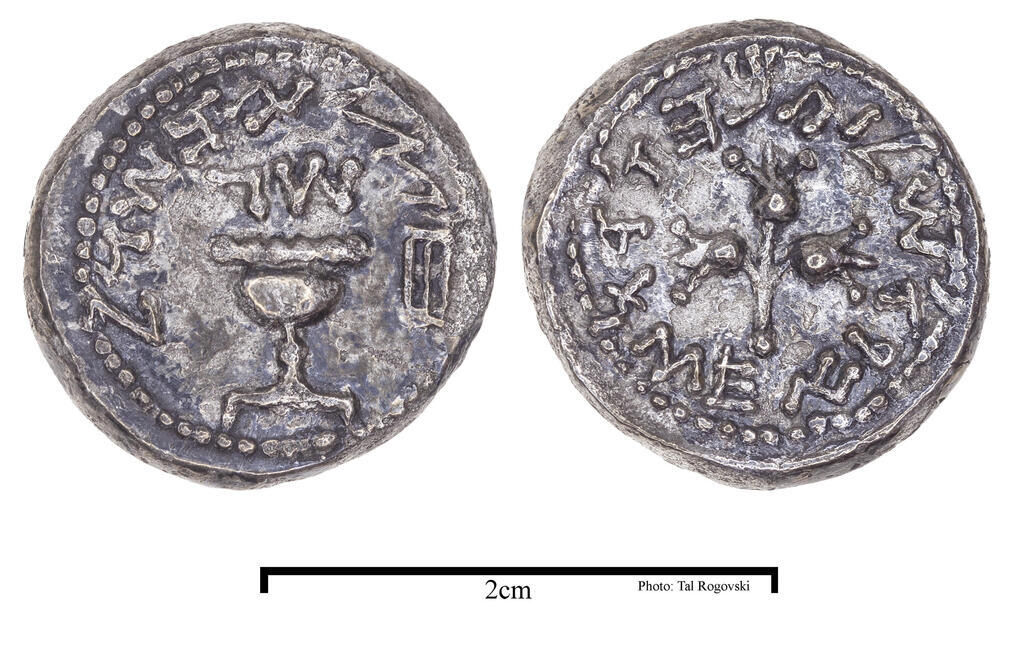 Our month-long summer excavation of Jerusalem’s Ophel ridge, directed by Prof. Uzi Leibner and in joint partnership between Hebrew University and Armstrong College, continues to bear fruit. Among the more than 150 coins discovered during the excavation process (with more continually coming out during the ongoing wet-sifting process), many belong to the period of the Great Revolt of the Jews against the Roman Empire, nearly 2,000 years ago (66–70 c.e.).

Now, a special new discovery can be revealed to the public from among this trove: an exceptionally rare silver half-shekel coin, from the third year of the Great Revolt.

To date, among the tens of thousands of ancient coins discovered in Jerusalem, this is only the third such coin discovered in the city. Following an exceptional cleaning job by Mimi Lavi, head of the conservation laboratory at The Hebrew University of Jerusalem, the coin was able to be identified by the team’s numismatic expert Dr. Yoav Farhi, curator of the Kadman Numismatic Pavilion at the Eretz Israel Museum in Tel Aviv (see the interview with Farhi at our institute about the discovery, below).

“This is the third coin of this type found in excavations in Jerusalem, and one of the few ever found in archaeological excavations anywhere,” Professor Leibner commented.

Coins were (and still are) a means of delivering a political statement, hence the minting of such during the Great Revolt. And only the Roman emperor could grant permission for the manufacture of silver coins—thus, these precious objects were only produced by the Jews during this period of revolt. It is believed that such precious silver coins would have been minted in the temple complex. But these silver coins held more meaning than simple nationalism: Silver coins were the currency used to pay the “half-shekel tax” to the temple (see also Exodus 30:13, 38:26).

Dr. Farhi explains: “Until the revolt, it was customary to pay the half-shekel tax using good-quality silver coins minted in Tyre in Lebanon, known as Tyrian shekels or Tyrian half-shekels.” He notes:

These coins held the image of Herakles-Melqart, the principal deity of Tyre, and on the reverse they featured an eagle surrounded by a Greek inscription: ‘Tyre the holy and city of refuge.’ The Jewish Revolt coins served to replace this pagan imagery with Jewish symbols.

The coin features a temple-related goblet on one face with the words “half shekel” in the ancient Hebrew script, and on the other side a branch with three pomegranates and the inscription, “Holy Jerusalem.” “The silver coins from the Great Revolt were the first and the last in ancient times to bear the title ‘shekel,’” the researchers note. “The next time this name was used was in 1980, on Israeli Shekel coins produced by the Bank of Israel.”

The coin (among the rest of the Revolt hoard) was found in a grand first-century Herodian and early Roman-period public structure on the eastern edge of the Ophel, surrounded by mikvaot (ritual purification baths) that would have played an important role in the function of the temple service. Together with the revolt coins were remains of the final destruction of Jerusalem in 70 c.e.—including collapsed walls, strewn boulders and ash.

This upper, eastern Ophel site was originally excavated under the direction of Prof. Benjamin Mazar in the 1970s (in cooperation with our namesake, Herbert W. Armstrong and his Ambassador College). Further excavations have taken place at the site largely under the direction of the late Dr. Eilat Mazar (who died last year), in continued support from our (now named) Armstrong College. Prof. Uzi Leibner has since taken up the baton for continued excavation of the upper, Second Temple Period public building. (You can read about our latest excavation in detail in our July-August issue of our free magazine, Let the Stones Speak, here—and click here to receive a free subscription to the bimonthly magazine.) Plans are underway for our and Hebrew University’s return to the site this coming summer.

We look forward to what new discoveries it brings!