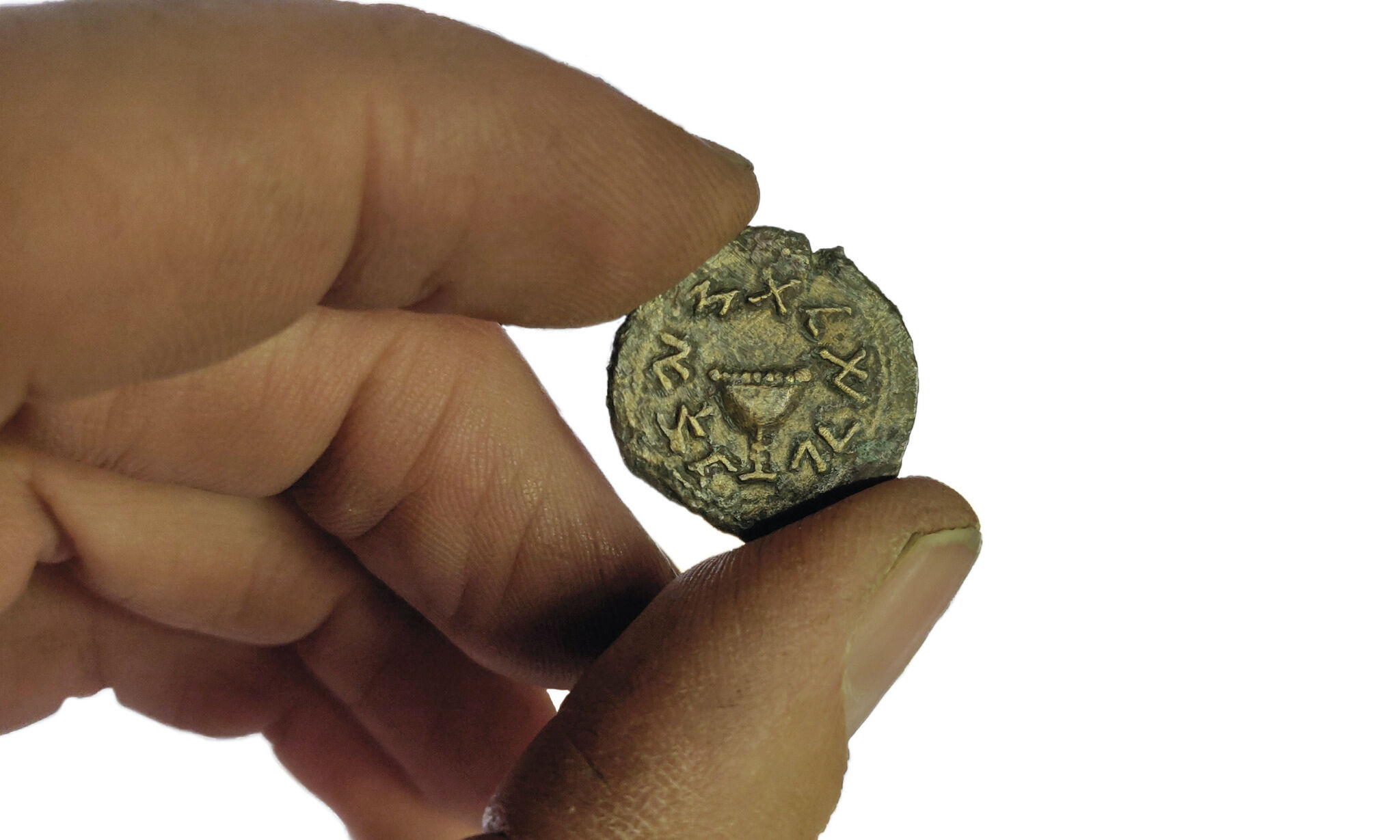 As tensions increased between Judea and Rome in the first century c.e., the Jewish inhabitants of Jerusalem searched for ways to demonstrate their resolve and determination to remain in the city. They wanted to show Rome that Jerusalem was their home and that they planned to inhabit the city perpetually.

One measure to demonstrate their rebellion and show they had no plans to abandon the city was to mint new currency. The creation of new coins symbolized tenacity and hope, and it provided a morale boost to Jerusalem’s increasingly despairing Jewish inhabitants.

In his great work The Jewish War, priest-turned-historian Josephus Flavius provided a gripping firsthand account of the Great Revolt, which began in 66 c.e. Across Israel, a lot of archaeological evidence has been discovered that supports the literary account of the Great Revolt. Among this evidence, archaeologists have found many revolt coins minted in Jerusalem by rebelling Jews.

Revolt coins are typically made of either silver or bronze. They are labeled with the year of the revolt in which they were minted. Year One corresponds to 66 c.e., while Year Four and Five coins correspond with 70 c.e., the year Jerusalem was finally destroyed. Although the revolt continued until the famous Masada fortress was captured in 73 c.e., no six- or seven-year coins have ever been discovered. This is why scholars believe revolt coins were minted in Jerusalem. When Jewish rule over Jerusalem ended in 70 c.e., so did the minting of new coins.

On the Ophel, archaeologists are even finding Year Four (69–70 c.e.) coins. The discovery of Year Four coins was once rare; by 69 c.e. , much of Judea had already been conquered and Jerusalem remained the Jews’ final stronghold. Amazingly, Year Four coins are now being discovered fairly frequently.

Many Year Four coins were discovered this summer in our excavation with Prof. Uzi Leibner. The discoveries this summer come on the heels of our discovery of a hoard of two dozen Year Four coins in 2018. That year, the late Dr. Eilat Mazar of Hebrew University led her final excavation on the Ophel with support and funding from the Armstrong International Cultural Foundation.

The main goal of the 2018 season was to excavate a large cave-turned-cistern that was used as a hideout by Jews during the revolt. Inside this cave, we discovered a wealth of evidence of the very last moments of the Jewish revolt—including 24 Year Four coins.

Given the time frame, it’s understandable that many Year Four coins were discovered in the rebel hideout from immediately before Jerusalem fell. Interestingly, the coins were not found all together, as one might expect. Rather, the Year Four coins (along with a number of Year Two and Three coins) were found littered throughout the 7-by-14-meter cave. They were found in strata correlating to the last year of the Roman revolt. And they were found alongside broken pottery vessels, including jars and cooking pots. The cave had not been disturbed since the Second Temple period, providing a “time capsule” of Jewish life during the revolt.

The coins are decorated with various Jewish symbols, including the traditional “four plant species” of the Feast of Tabernacles—palm, myrtle, citron and willow—and a goblet or chalice that was likely part of the temple service.

Along with the motifs, the coins feature ancient Hebrew script, rather than the typical square Hebrew script of 2,000 years ago. This could be because the Jews wanted to link back to their ancient heritage or because the ancient text carried with it a more innate “holiness” than the new script. As for the text itself, the coins from the second year of the revolt display the text “For the freedom of Zion” in ancient Hebrew. The Year Four (69–70 c.e. ) coins’ inscription reads “For the redemption of Zion.” Scholars believe that the change is indicative of the mood shift of the rebels as their defeat became inevitable.

The Year Four coins also reflect a change in the shape of some of the Hebrew letters. These changes could be due to the fact that there was a new minting authority or new mint itself, perhaps led by rebel leader Simon Bar Giora, who began to dominate Jerusalem in the final year of the revolt.

“It’s not a usual phenomena that we can come to such a closed cave, untouched for 2,000 years, including the very last remains of life of the people who were sieged in Jerusalem, suffered in Jerusalem, till the very last minute of the Second Temple period,” Dr. Mazar said in 2018. The same can now be said for the discovery of the above-ground 70 c.e. destruction, replete with Year Four revolt coins.

The discovery of the coins this summer was all the more impactful as they were found in the weeks and days leading up to Tisha B’Av. Commemorated on August 6–7, Tisha B’Av is an annual fast day on which many Jews remember the destruction of both King Solomon’s temple and the second temple.

The discovery of these coins—just before Tisha B’Av—was an important reminder: When we practice archaeology, we are not unearthing lifeless, inert stones, pottery and coins. Rather, all the walls, pottery and coins we uncover are filled with history, with stories and memories of real people—in this case, stories of pain, suffering and tremendous heartache.

In 69 c.e., defeat was inevitable for the Jews still living in Jerusalem. As they fled the city or died inside it, these people believed Zion would one day be redeemed. Nearly 2,000 years later, Zion once again belongs to the Jews. At the birth of the modern state of Israel in 1948, the government began to mint its own coins. At first, Israel pegged its own newly minted pound to the British pound. In 1980, Israel’s government decided to change to the new Israeli shekel, recalling the name given to weights and currency during the first and second temple times.

For the coin images, the government decided to use historical motifs, archaeological discoveries and even copied designs of ancient coins. For example, the half shekel has the ancient lyre or harp, while the five-shekel coin features a proto-Aeolic capital, a type of royal architecture harkening back to biblical times. The five agorot (5 percent of a shekel) is patterned after the Year Four coin from the Jewish revolt. While the five agorot coin was withdrawn from use in 2008, the modern 10-shekel coin (Israel’s most valuable coin) has the same ancient script and words from the fourth-year revolt coin: “For the redemption of Zion.”