Aramaic in the Book of Jonah—Evidence of Late Authorship? Or Something Else Entirely?

It’s a common charge, that the presence of Aramaic in certain biblical texts is “proof” of late authorship. But with the book of Jonah, it’s rather more nuanced …
By Christopher Eames • November 12 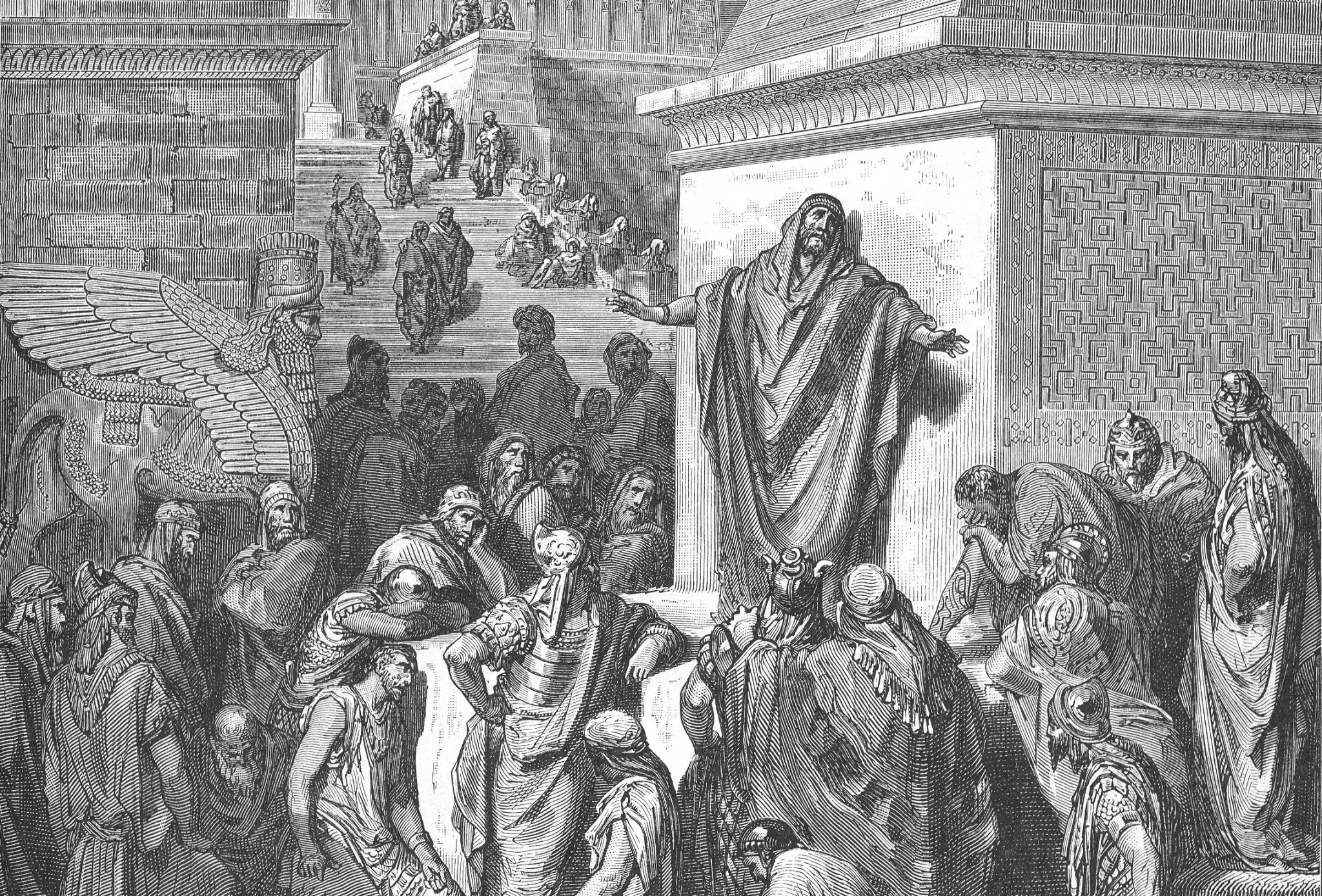 During the centuries following the destruction of Jerusalem circa 586 b.c.e., Aramaic came to replace Hebrew as the everyday language of the Jewish people. It’s the reason why there is a significant amount of Aramaic language found in some of the very latest books of the Hebrew Bible, which were written post-destruction—the books of Daniel, Ezra and Nehemiah.

This is to be expected for these periods and settings (the book of Daniel especially so, for example, as it was penned from the courts of the Babylonian Empire, for which the Aramaic language was the lingua franca).

Where this can become somewhat sticky, however, is the charge of Aramaisms found in texts traditionally held to be much earlier. The book of Jonah is a case in point: The setting is incontestably during the first half of the eighth century b.c.e. (read “Jonah’s Remarkably Accurate Account of Assyria”)—nearly two hundred years before Jerusalem’s destruction, and even a half century prior to the destruction of the northern kingdom of Israel.

Traditionalists claim that the book was penned by the eponymous prophet. Minimalists claim it’s a late-date, post-captivity “satire.” A primarily cited “evidence” for this is the presence of Aramaic in the text. And an occasionally cited defense of early texts that contain piecemeal Aramaic is that they must be the result of a late-date editor, and not a wholesale authorship during a later period.

But there’s more here than meets the eye. Is the Aramaic found in the book of Jonah really evidence of late authorship?

Culprit One: The Sailors

First, a qualification. In some cases, it can be difficult to differentiate certain words as Aramaic or Hebrew, as there are certain similarities between the developing languages. Accurately placing them into their correct periods can be a fraught process as well. A case in point, regarding Aramaic: A former belief was that the language of the book of Daniel constituted a late, Western-style Aramaic, post-dating the prophet Daniel by centuries. Evidence has since shown that the language of Daniel is that of an early, Imperial Aramaic (fitting with the period in which Daniel lived). It’s important to keep in mind that we are working with a comparatively small data set here.

That being said, there are some—not many, but some—discernible Aramaisms in the book of Jonah. And primarily, they actually come courtesy of the sailors in the account.

The first chapter of Jonah relays the prophet initially fleeing from his God-given commission, boarding a vessel at the port Joppa which was sailing for Tarshish. During the voyage, a storm blew up. “And they [the sailors] said every one to his fellow: ‘Come, and let us cast lots, that we may know for whose cause this evil is upon us.’ …” (verse 7). The phrase here, “for this cause,” is a “noted Aramaic idiom.” In his exhaustive book Dating the Old Testament (2007), author Craig Davis explains it this way (first noting the extremely small number of purported Aramaisms actually found in the book of Jonah at all):

There is a noted Aramaic idiom in Jonah, “beshelmi” (בשלמי), “on whose account,” in 1:7 …. As explained in section 2.2.2.2, a small number of Aramaisms proves little [about the period of composition]. In this case, the Aramaism is actually understandable, since Jonah is on a ship with gentile sailors who were probably speaking Aramaic. These sailors spoke the words in verse 7 ….

Indeed, verse 7 represents a direct “quote” from the mouth of the sailors. Likely, these eighth-century sailors were Syro-Phoenicians, Israel’s seafaring northern neighbors. The Bible describes a close connection between Israel and Phoenicia, particularly in the role of seafaring—and particularly in transit to and from Tarshish (i.e. 2 Chronicles 9:1; Isaiah 23:1; Ezekiel 27:12).

But the picture only gets more interesting, because the book of Jonah continues to describe that once the sailors realized that Jonah was to blame for the storm, they confronted him with the same above-mentioned idiom—but used, instead, the Hebrew form! “So they cast lots, and the lot fell upon Jonah. Then said they unto him: ‘Tell us, we pray thee, for whose cause this evil is upon us …’” (verses 7-8). Davis notes this “more Hebraic form of the same idiom in 1:8 ‘ba’asher lemi’ (באשר למי).”

This adds some interesting flavor. It’s evident enough from the context that these sailors were most likely “northerners”—Phoenicians or the likes. The language they are quoted as using in verse 7 all but confirms that. Yet the following verse quotes them using the same idiom in the same sense, but directed toward the prophet Jonah. It thus seems apparent that the sailors recognized Jonah as a foreigner (verse 8), addressing him with perhaps a “more Hebraic” form of the word.

But it gets even more interesting. Because another evident Aramaism, again based on the same phrase, can be found in verse 12 of the same chapter—Jonah’s reply to the sailors. “And he [Jonah] said unto them: ‘Take me up, and cast me forth into the sea; so shall the sea be calm unto you, for I know that for my sake this great tempest is upon you.’” This line, for my sake/for my cause, “besheli” (בשלי), is again a directly related Aramaic idiom, this time used by Jonah on the sailors. Was Jonah here perhaps utilizing his own knowledge of Aramaic to defer to the sailors’ language—using his ability to communicate with them in their own tongue? More on this further down.

Thus, in full, we have an Aramaism contained within a quote of the sailors; the sailors naturally using the Hebrew form of the Aramaism in addressing Jonah; and Jonah replying to the sailors with their own form of the word. What we see here is hardly an oversimplified picture of a late-date, thoroughly Aramaic-infused text. Instead, we get a feel for a more dynamic, multilayered conversational/translational situation, one much earlier on in Israel’s history (a time in which Aramaic and Hebrew were more closely related), with the attempt of each party to address the other in their own familiar language.

There are other potential and debatable Aramaisms contained within Jonah. And again, they often relate to the sailors (such as their very title as “mariners” in verse 5, “malahim,” and the word “ship,” same verse; also the captain’s statement in verse 6, “think upon”/”take thought for”). But this would again only be expected and consistent with an early date for the text. What would not be befitting of a late-date text is so few Aramaisms in the text. Further, no Persian words are found in the book of Jonah (a hallmark for late texts), and on top of that, archaisms are found in the text, such as the early form of “I” as “anoki” (אנכי), e.g. Jonah 1:9.

As Davis appropriately concludes: “These facts favor the idea that Jonah was written before the exile, rather than the post-exilic Persian period. … The theological, political, geographical and linguistics evidence favors an early date for the book of Jonah.”

In the section “The Book of Jonah” of W. O. E. Oesterley’s 1934 compilation “An Introduction to the Books of the Old Testament,” the author begs to differ, positing a late authorship based on such Aramaisms. Still, the author admits that “It is true that as early as the reign of Hezekiah (725–696 b.c.) we find knowledge of this language existent in Palestine ….” The text proceeds to quote German orientalist Theodor Nöldeke (1836–1930) in Encyclopaedia Biblica as saying:

[T]his preference for Aramaic, however, probably originated under the Assyrian Empire, in which a very large proportion of the population spoke Aramaic. In it this language would naturally occupy a more important position than it did under the Persians. Thus we understand why it was taken for granted that a great Assyrian officer could speak Aramaic (ii Kgs.xviii.26 = Isa.xxxvi.11); and why the dignitaries of Judah appear to have learned the language; namely, in order to communicate with the Assyrians.

The author of the article “The Book of Jonah” concludes: “While the nobles [of Judah, as cited in 2 Kings 18:26 and Isaiah 36:11] knew Aramaic, the common people [of Judah] did not understand it, and that was why the princes asked Rabshakeh to use it. We must not, therefore, conclude that because at this comparatively early period Judaean officials knew Aramaic, it was in any way generally known in Palestine at that period. Although the influence of Aramaic steadily grew, this did not really begin until well after the Exile.” Therefore, based on the (again, minimal) Aramaisms he identifies in the book, the author redates the text to some four hundred years later—”approximately 350 b.c. or thereabouts”!

Granted, over the past century since the writing of that text, our field of knowledge in regard to Aramaic and Hebrew, and their early development and relationship, has expanded. Still, it perhaps would be unusual for the book of Jonah to contain the Aramaisms it does, if it were any other exclusively Hebrew book by a Hebrew prophet to the Hebrew people, entirely about the Hebrew people. But what is the book of Jonah? It is an Assyrian-centric book! As Nöldeke explained, the Assyrian empire was an empire of that same eighth century “in which a very large proportion of the population spoke Aramaic”! (And in such manner, there are certain discernable Aramaisms that can be identified in the latter part of the book, relating to Jonah’s stay in Assyria.) Of course, the book of Jonah itself is intended for readership by a Hebrew-speaking audience. But the text and dialogue certainly preserve wisps of this indelible Aramaic connection with the sailors and Assyrians.

And as the back-and-forth dialogue between Jonah and the sailors suggests, could that have perhaps been a reason Jonah—of all the prophets on the scene during the eighth century b.c.e.—was specifically chosen to deliver this message to the Assyrians? Because of his grasp of the language?

When it comes to the book of Jonah, linguistic analysis is one thing. More stunning, however, is the alignment of archaeological evidence that affirms the historicity of Jonah’s account of early eighth-century b.c.e. Assyria. For more on this topic, take a look at our article, “Jonah’s Remarkably Accurate Account of Assyria.” (And as for the “great fish”? Check out our article, “What Was the ‘Great Fish’ That Swallowed Jonah?”)