The Biblical Figure Behind Our Word ‘Volcano’ 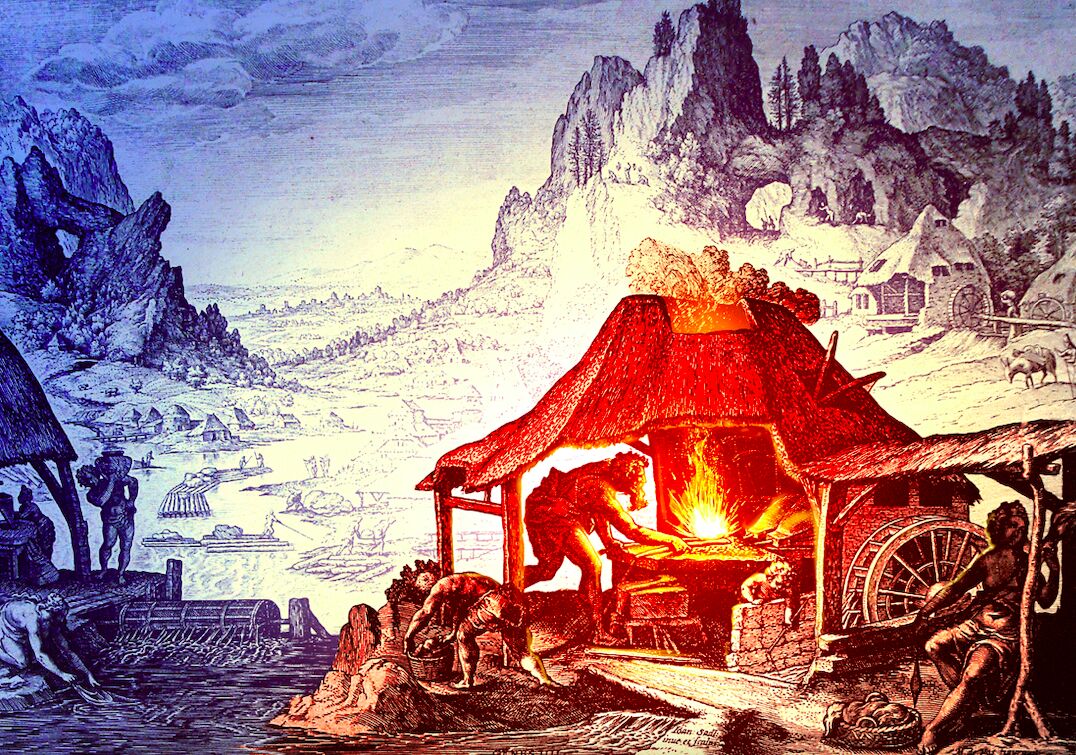 Volcano is a common, unassuming modern word. Perhaps more common to some than others, depending on your nation of origin (i.e. if you’re a fellow New Zealander—a country straddling the Pacific Ring of Fire, its most populous city built within a region of 53 volcanoes, its largest lake a volcano caldera, its worst recent natural disaster a volcanic eruption, and the location of the world’s largest-known supereruption in “modern” human history).

Volcano is an ordinary English word that everyone knows and recognizes; one you probably wouldn’t bat an eyelid at. But have you ever given thought about where this word comes from? There’s an incredibly interesting origin—traceable right back to the beginning of the Bible.

Vulcan and the Man Behind the Myth

Tracing the etymology of the word volcano is simple and straightforward. As related by the Oxford Dictionary of English, “volcano” is an English word traceable from the “early 17th century: from Italian, from Latin Volcanus ‘Vulcan.’”

The word traces back to a single Italian volcanic island near Sicily, named Vulcano. It was so-named after the Roman god Vulcan, the god of fire and blacksmithing, who, according to legend, had his foundry on this island.

The island’s legendary association with the god was received from the earlier Greeks. (Many Roman gods are direct equivalents to Greek gods, often given different names but representing the same general history; for example, the Roman Jupiter is the Greek Zeus, with the same attributes; their respective fathers are the Roman Saturn/Greek Cronus.) The Romans adopted Greek gods and legends in the same way that they adopted the Greek alphabet.

The Greeks also considered this island to be the “foundry” of their god of fire, volcanoes and patron god of blacksmiths and metalworking, a deity they named Hephaestus. His symbols were the hammer and anvil. Hephaestus was one of the “mighty” sons of the famously polygamous Greek god Zeus (in like form, the Roman Vulcan was the son of their Zeus equivalent, Jupiter). References to this Greek Hephaestus go back at least as early as Homer’s Iliad (around 800 b.c.e.).

Clearly, the deities Vulcan and Hephaestus are a continuation of the same core legend. The exact meaning of the Greek name Hephaestus is still debatable. But the Roman-adopted name can be traced earlier—much earlier.

Philologist Gerard Capdeville of the Université Paris-Sorbonne noted the name of the Roman god Vulcan as a continuation of the deity worshiped on the Greek island of Crete by the second-millennium Minoans. This deity was named Velchanos, the master of fire (and there is also a similarly named Etruscan deity, Velchans).

And from here, we can turn to another early source that traces just such a deity to a core individual on the scene thousands of years earlier: the Bible.

Genesis 4-6 give a summary of the antediluvian world condition prior to Noah’s Flood. While the genealogies here are very human, they remarkably parallel later deified figures found among the Greeks and Romans.

To the ancient Greeks, a goddess named Gaia (meaning “Earth” or “life”) was considered the mother of all living. Gaia, of course, immediately comes across as an Eve type—and even the name is similar to a variant of the Hebrew name Eve, Chaia, meaning “life” (and pronounced similarly). Gaia’s child Cronus was the Greek patron of the harvest, symbolized by the sickle and grain. The biblical Eve’s son Cain was likewise known specifically as a “tiller of the ground”—a crop farmer (Genesis 4:2-3).

According to Greek mythology, Cronus became leader of the Titans and ruler of the world after a murderous act of ambush that soaked the ground in blood (albeit against his father, rather than his brother, as in the biblical account). Cronus then sired the first generation of Olympians with his sister Rhea.

Cronus was overthrown, however, by his son Zeus, the famously “polygamous” god with numerous human consorts. The foundation of the Greek legend of Zeus may in turn be a derivative of Cain’s descendant Lamech, whom the Bible gives some indication overthrew Cain (verses 15, 23-24), and is the Bible’s first-noted polygamist.

Through his wives, Zeus (again, the Roman Jupiter) sired a number of “mighty” children, including the blacksmithing, fire and volcano god Hephaestus/Vulcan. Now notice the following scriptures: “And Lamech took unto him … Zillah, she also bore [for him] Tubal-cain, the forger of every cutting instrument of brass and iron …” (verses 19, 22).

Here in Genesis 4 is the first-described blacksmith in the Bible—“patron” of forging, metalwork and, by way of deduction, the “fire” necessary to smelt. As a son of the Zeus/Jupiter parallel, Lamech, this Hephaestus/Vulcan parallel Tubal-cain is a fascinating fit in deeds.

But even moreso in name. Because the English translation “Tubal-cain” is not how this name is pronounced in Hebrew; rather, it is Tu-vulcain!

And what does the name mean? Gesenius’ Hebrew-Chaldee Lexicon gives the following explanation: “[P]erhaps ‘smith of scoria’ [scoria is a volcanic rock], composed of Arab. قين smith, and Pers. توپل scoria of metal, the genitive being put first, which seems to show the origin to be Assyrian or Persic (but be it remembered that it is an antediluvian proper noun).”

Is it just coincidence that we have here the record of the “first blacksmith,” Tuvulcain, whose name and pioneering practice directly parallels the legendary accounts continued in the Greek and Roman worlds—a tradition preserved in our use of the now common, everyday word volcano?

The parallels are not only in name and deed but also in genealogy. Through his wives, Zeus sired a number of “mighty” children, including the above-mentioned Hephaestus, as well as Apollo, Hermes and Athena. I name these four specifically because they are close matches to the four children of Lamech: Tubal-cain, Jubal, Jabal and Naamah. We have discussed Tubal-cain. Here are the following three:

Again, as we’ve seen from the biblical account, all are linked to the line of Cain—a very human line—but twisted to a status of divinity, a “deification” that Genesis itself addresses: “sons of God” marrying “daughters of men” and begetting “mighty men … of old, the men of renown” (Genesis 6:1-4). For more on this peculiar passage, take a look at our following article: “Did Angels Marry Women and Breed Giants?”

The Greek accounts themselves describe that, following the mixing and intermingling of the “gods” and humans, a great flood was sent that covered the Earth and wiped out all human life except for the righteous Deucalion and his wife, who were spared on an ark. This, of course, is a variant of the Bible’s account of Noah and the Flood (described in Genesis 6-8)—and it is one of many different national and cultural variations found worldwide that, taken collectively, point most logically to a single, core event that did occur in our distant collective memory.

In summary: It’s often said that our Western societies were founded on Judeo-Christian values. But today’s modern and supposedly “enlightened” world has never been further removed from these core values.

Yet some things are buried so deep within, they make up our very language. Though comparatively few today would believe the biblical Tubal-cain ever existed, our unwitting—yet somehow almost doggedly determined—preservation of his name across multiple millenniums suggests otherwise.