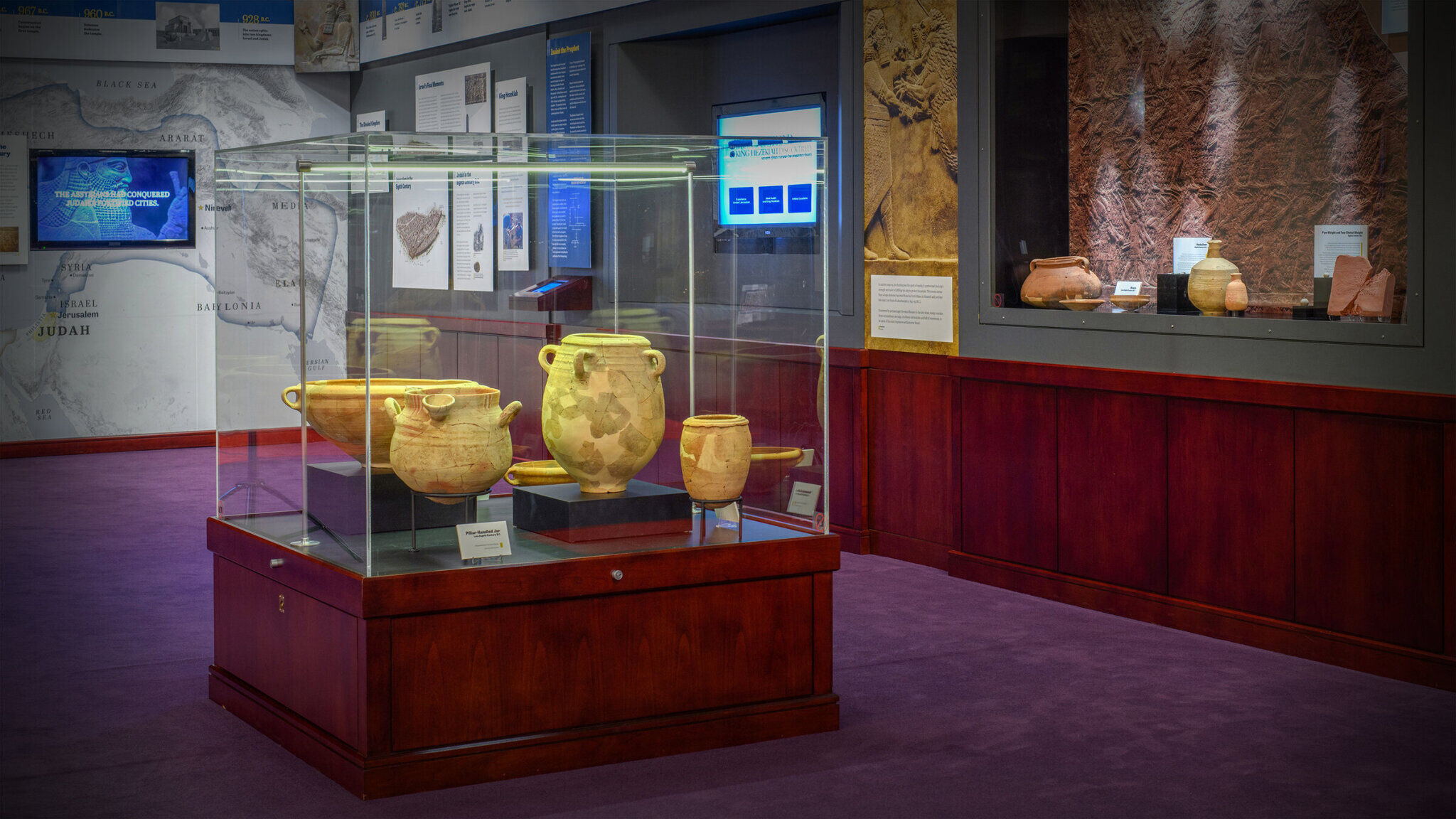 From June 10, 2018, the Armstrong International Cultural Foundation is hosting the world premiere of “Seals of Isaiah and King Hezekiah Discovered”—an archaeological exhibit that tells the dramatic story of ancient Judah’s most famous king-prophet partnership. The Hezekiah and Isaiah bullae, and nearly three dozen other pieces borrowed from the Israel Antiquities Authority are on display in Armstrong Auditorium in Edmond, Oklahoma. These artifacts—displayed on this page— illuminate how Jerusalem avoided annihilation at the hands of the Assyrian army at the end of the eighth century b.c.e.

Please visit our exhibit page for the full story.

These iron arrowheads and flint slingstones were discovered in the eighth century destruction layer at Tel Lachish. These weapons were used with deadly force during Sennacherib’s siege against the city. These very items, traveling at high speed, may well have met their mark and taken the lives of individuals on either side of this very real conflict. A sling re-creation is shown.

lmlk seals were stamps on the handles of official vessels used during the reign of King Hezekiah. The handles bear the inscription lmlk, Hebrew for “Belonging to the King.” lmlk handles have a central motif positioned below the inscription. There are two main versions of the central motif: either a four-winged scarab or a two-winged sun. It is common for handles to have a second inscription below the central motif. This secondary inscription names one of four Judean cities: Hebron, Socoh, Ziph and Mmst (an unknown word). While well over 2,000 of these stamped handles have been found, the reason for their use is unknown. Various theories include taxation methods and special preparation for the Assyrian siege.

A pym is an ancient weight value used in Judah over hundreds of years. It weighed about 7.6 grams—equal to about two thirds of a shekel weight (about as heavy as three pennies). This weight comes from Tel Batash, believed to be the biblical site of Timnah (Joshua 15:10, 57).

The pym weight is mentioned in 1 Samuel 13:21. When the Philistines made inroads into Judah during King Saul’s time, they forbade the Israelites from owning weapons and blacksmithing, and charged a pym’s worth in currency to have their plowshares and mattocks sharpened. In 1 Samuel 13:21 it is recorded: “[T]he charge was a pim for the plowshares and for the mattocks, and a third of a shekel for sharpening the axes and for setting the goads” (Revised Standard Version).

The two-shekel is approximately 23 grams (about as heavy as one AA battery). The shekel standard is referenced in dozens of scriptures.

Hacksilver is the term given to small chopped or bent fragments of silver that were typically used as currency or melted down for reuse. This hacksilver came from the northern coastal city of Dor, which belonged to the tribe of Manasseh. It is likely that this material was being used when the Assyrians swept through and destroyed the northern kingdom of Israel. Part of Manasseh heeded Hezekiah’s call to come down to Jerusalem to worship and were spared the onslaught (2 Chronicles 30:10-11).

This juglet may have been used for oil, perfume or ointment.

This lamp, typical of the Iron Age style, was discovered at Tel Lachish. It would have been used right around the time of the fall of the city to the Assyrians. A string wick would have been inserted inside the pinched end, and the shallow basin would have been filled with oil.