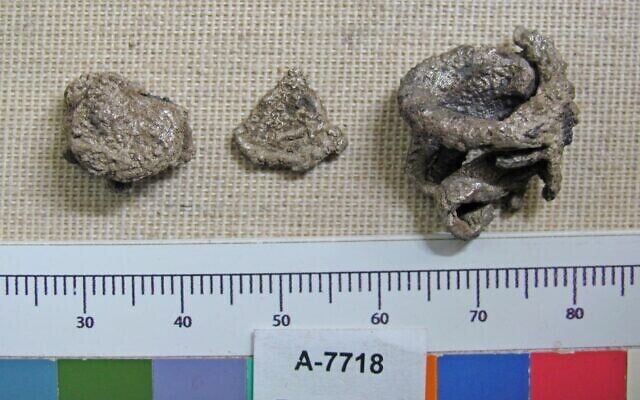 A recent study published in the Journal of Archaeological Science concluded that silver originating in Anatolia was used as currency in the Levant during the Middle Bronze Age (first half of the second millennium b.c.e.).

It was initially believed by scholars that silver currency hoards in the Southern Levant were an Iron Age (1200–586 b.c.e.) phenomenon. This discovery, however, sheds light on much earlier commercial and political interactions—as early as the 17th century b.c.e. That is some 500 years earlier than the generally accepted time frame and parallels the biblical account of the interchange of such currency.

Unlike minted coins, which weren’t used in the region until around 1,000 years later, currency hoards needed to be weighed to determine their value. The University of Haifa’s Dr. Tzilla Eshel stated this in an interview with the Times of Israel: “The use of silver [as currency] indicates a society that used scales, and indicates a society that used writing to write down the transactions. It also means you need to have silver flowing into the area constantly, so the volume of trade has to be larger, and you can see something bigger is happening in economic terms.”

Such irregular silver pieces used as currency are also known by the German word hacksilber (hacksilver). This method of transaction is, naturally, often overshined by the method of minted coinage, which emerged a millennium later. But hacksilver’s value was in its weight, so polishing or engraving the metal was of no import at the time. Further, it could be re-melted or reworked in any desirable fashion and still retain its value.

Not every silver hoard can necessarily be designated a currency hoard. The latest report clarifies, however, that these hoards discovered at Gezer, Shiloh and Tel el-ʿAjjul were not found in the context of silversmith tools or a workshop, so they were not just off-cuts from production. Rather, they were specifically collected for their intrinsic value, and hence were deemed to be silver currency hoards.

There are no known silver mines in Israel, so isotopic testing was used to determine the origins of the silver. The results showed them to have come from the region of ancient Anatolia, or modern-day Turkey. This further reveals a robust level of trade existing between the two regions—again, much earlier than previously thought. In order to have such imported silver currency circulating in Canaan at the time, silver must have been an accessible and established part of trade.

In the realm of major trade, there is always a great likelihood of major fraud. Early “fake silver” manufacturing has also been revealed recently by archaeologists. (The technique in this case was applying arsenic to mostly copper pieces in order to give them a resemblance to silver.) This was another reason for the use of hacksilver. Silver is a relatively soft metal, and a skilled merchant could tell the difference between real silver and tainted/mixed silver by how easily it would cut. It was standard practice prior to accepting pre-bundled amounts of money for a merchant to check the hoard by “hacking” it slightly.

The report states that in Israel, prior to this discovery and analysis, there was “no clear indication for the use of silver as currency or means of exchange during the Early Bronze Age, the Intermediate Bronze Age and most of the Middle Bronze Age.”

That may be so, archaeologically—but certainly not textually. The Bible, after all, thoroughly documents the use of weighing out silver as currency during this Middle Bronze period, centuries prior to the Iron Age.

Genesis 23:14-16 state: “And Ephron answered Abraham, saying unto him: ‘My lord, hearken unto me: a piece of land worth four hundred shekels of silver, what is that betwixt me and thee? bury therefore thy dead.’ And Abraham hearkened unto Ephron; and Abraham weighed to Ephron the silver, which he had named in the hearing of the children of Heth, four hundred shekels of silver, current money with the merchant.”

In this passage—the first biblical account of a purchase of land—we see that Abraham weighed out silver, because they didn’t use coins that had clear values inscribed on them.

Other examples include Abimelech paying 1,000 pieces of silver to Abraham (Genesis 20:15-16) and Joseph’s brothers paying for food with bundles of silver in Genesis 42:35. Such verses often use the word “money,” but the Hebrew word here, kesef, means “silver.” (Today, the Hebrew word is used dually to refer to any kind of money, as well as to literal silver). The Prophetess Deborah, who lived during the judges period, describes a battle in Judges 5 and states in verse 19, “…Then fought the kings of Canaan, In Taanach by the waters of Megiddo; They took no gain of money.” “Money” is again referring to silver, but the word for “gain of” is unusual. A commonly attributed definition is “unjust gain.” But Dr. Eshel highlights that this can be defined as “to break or sever,” and she says “the verse should be translated ‘they took no pieces of silver’”—no hacksilver.

Archaeology has now confirmed that silver currency hoards in the Levant were in use during the first half of the second millennium b.c.e.—during the time of the patriarchs—and continued to be used into the period of the Israelite monarchy, before being phased out by the later use of minted coins. This, then, is just another discovery and analysis that confirms the reliability of the biblical record and provides further insight into what life was like in the Levant during the Middle Bronze Age and beyond.