A brief overview of the secular timescale of history and its connection to the Bible
By Samuel McKoy and Christopher Eames • December 6, 2022 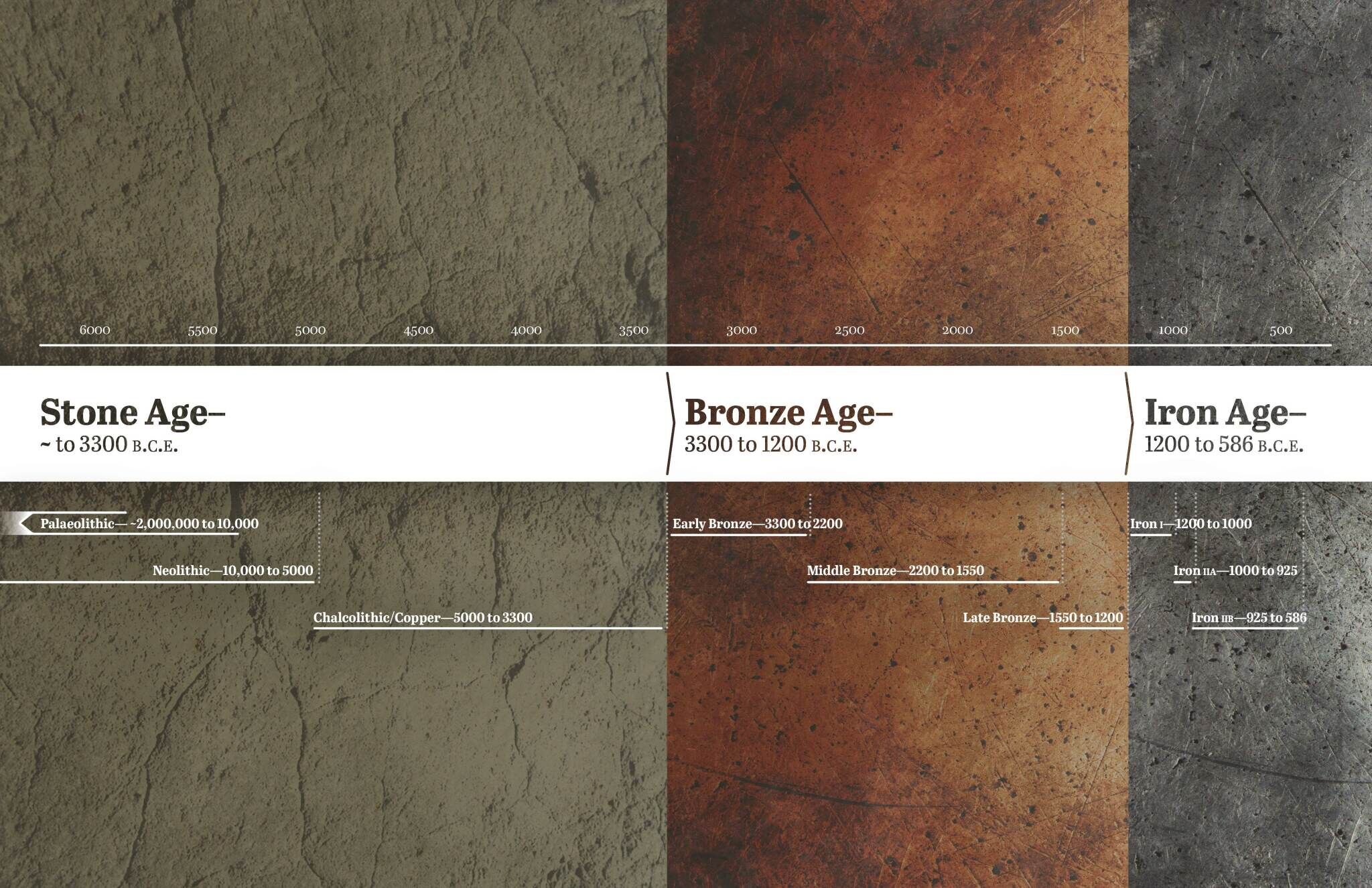 The ancient history of the Middle East has been organized into several ages which make up one general timescale. Each age contains its own unique cultural, material and geopolitical characteristics. The names and dates of this ancient timescale give archaeologists context for the interpretation of their findings.

These are the archaeological ages generally cited, particularly as they pertain to human history in the Middle/Near East:

Periods from this point on are more specifically named after geopolitical polities (i.e. “Babylonian,” “Persian,” “Hellenistic,” “Roman,” “Byzantine”). But why are the earlier, ancient “ages” categorized in such a way?

This general timescale was concocted by a Danish archaeologist named Christian Jurgensen Thomsen in the early 19th century. He suggested that ancient history should be categorized by the material which was used for tools and weapons in each time period. This system was rudimentary, being made up initially of only the Stone Age, the Bronze Age and the Iron Age. The suggestion had evident flaws: Ages based on tool material would overlap (e.g. bronze tools were still regularly used long into the Iron Age), technological advances varied from region to region, and there was still much debate on when each material rose to predominance. Nonetheless, Thomsen’s system was adopted, and it brought much-needed structure to the study of archaeology.

Later, further distinctions were drawn to make the ages more specific. These delineations were set at points of major events, political changes or cultural changes. For instance, the Early Bronze Age ended because of the collapse of several important kingdoms in Egypt and the Middle East, which was (debatably) due to a prolonged drought or other weather phenomenon. The Middle Bronze Age ended because of a settlement crisis in the Levant. Iron i ended with the establishment of the united monarchy in Israel. Iron ii ended with the destruction of independent Levantine states, particularly Judah and the destruction of Jerusalem by the Babylonian empire. At that point this particular ancient archaeological timescale ends, which some credit to the works of Herodotus—his lengthy histories written in the fifth century b.c.e. were utilized by later historians and archaeologists in establishing a firmer timeline of subsequent events and epochs relating to the known world.

Of course, it’s important to remember that this earlier timescale is merely a “floating” one—a generalization, or simplification. There is certainly overlap, again, in metallurgy, etc. We technically still live in the “Iron Age,” given our use of the metal (although perhaps it would be more appropriate to name our modern age the “Plastic Age”). Still, the timescale helps bring a needed general structure to referencing early periods.

In application of the archaeological timescale to the biblical timescale, such an early “Stone Age” epoch—to the tune of “millions of years ago”—will naturally be dismissed. And with justification: The establishment of these periods is highly speculative since they fall into the realm of “prehistory” (before the earliest-known period of writing), and thus cannot be easily checked against. The establishment of these early periods is also based upon admittedly dubious dating techniques. And technically, “Stone Age” cultures continue to exist to the modern day. (The book of Job mentions such “Stone Age,” “cavemen”-type cultures on the scene during Job’s day—Job 30:5-8.)

Where the standard timescale starts becoming interesting, from a biblical perspective, is the emergence of metalworking. It technically emerges on the timescale at the very last part of the overall Stone Age—the “Chalcolithic,” or “Copper Age” (around the fifth to fourth millennium b.c.e.). Interestingly, the first mention of metalwork in the Bible is with copper. Genesis 4:22 reads: “And Zillah, she also bare Tubalcain, an instructer of every artificer in brass ….” The Hebrew word from “brass” can be translated as either “copper” or “bronze” (whose primary component is copper). The earliest-known extant version of this text, preserved in the third-century b.c.e. Septuagint Greek translation, translates this word as chalcos—from which we get the word “Chalcolithic.”

Still, the last part of the verse also mentions iron—“an instructer of every artificer in brass and iron.” So this may naturally be taken to infer that both metals were developed together. Still, however, it is interesting that copper/brass is mentioned first. As a more workable metal, it would naturally be the one “discovered” and worked with first (hence the “Copper” and “Bronze Age,” then followed by the “Iron Age”). That, of course, would not preclude metalwork in iron at an earlier period—it would only suggest that it was less utilized. That being said, the unusual introduction of this individual—as the “instructer of every artificer”—could hint at Tubalcain as simply the forerunning model for every future metalworker (and that he was)—firstly those in copper/bronze, and secondarily those in iron.

A basic understanding of the different periods on this archaeological timescale can help a Bible or history student categorize knowledge of different cultures, kingdoms, and practices of different times. Though many factors of this timescale are still debated, it is a great resource for historians and archaeologists alike.