The Man Who Brought Hebrew to America 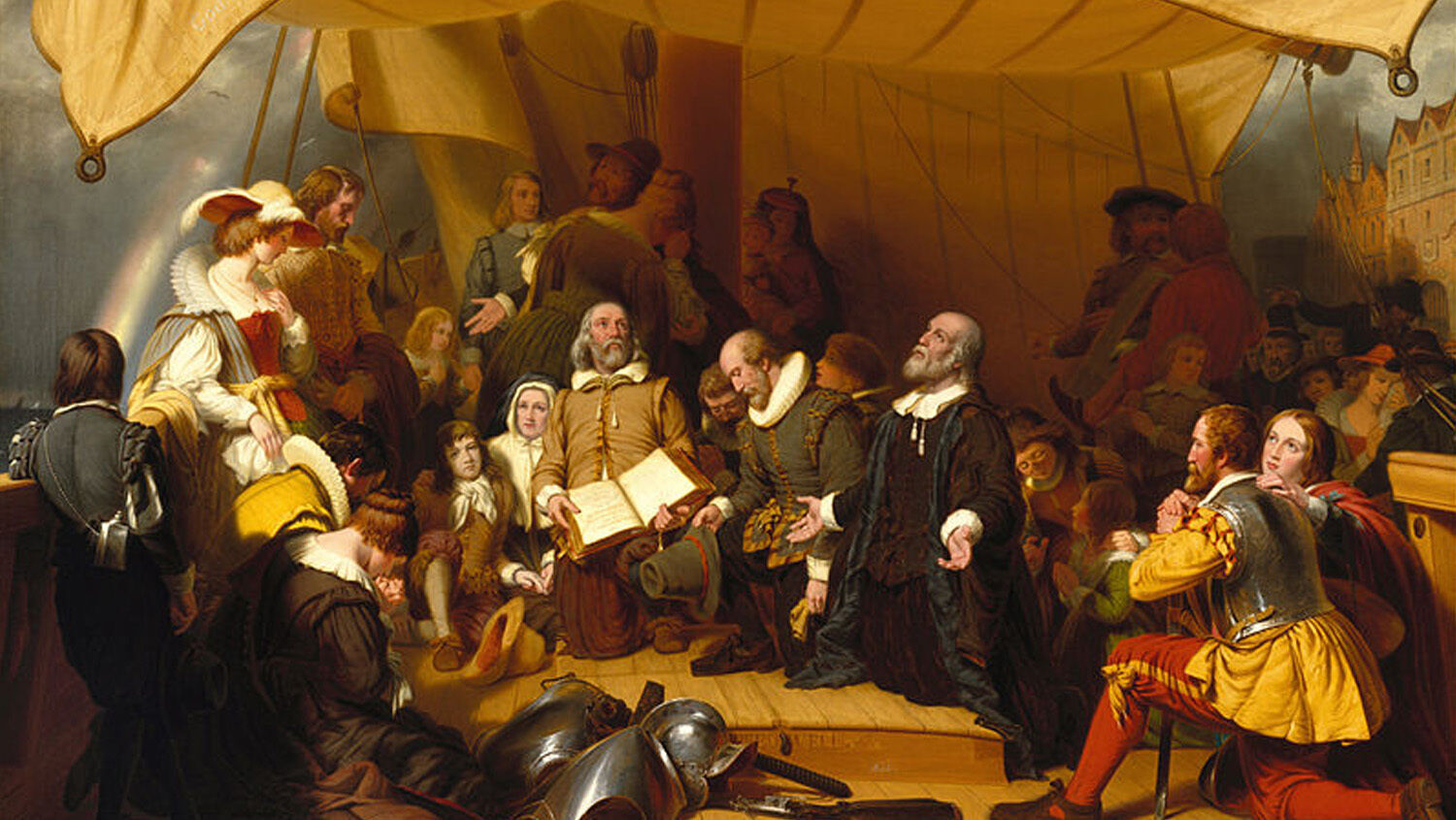 “Embarkation of the Pilgrims,” by Robert Walter Weir (1857)
Public Domain

On December 21, 1620, a group of weary people waded ashore in a place they considered New Israel. An ocean away, they had left everything they knew behind for the sake of their belief in the Bible and the law of Moses in particular. They likened European society to Egypt, the king of England to a “British pharaoh,” the Atlantic Ocean to the Red Sea, and their epic crossing of it to a modern-day Exodus.

They even came within one vote of adopting Hebrew as the official language of Plymouth Colony. Gov. William Bradford believed that after his death he would converse with God and the angels in the language of the Bible. He diligently studied both Hebrew and Greek so he could “see with his own eyes the ancient oracles of God in their native beauty.” Bradford strove to establish the law of God as the law of Plymouth. Many believe he patterned the first Thanksgiving after the feast of ingathering recorded in Exodus 34:22, even as he taught against the paganism of festivals like Easter and Christmas.

Due to the faith of men like Governor Bradford, America’s founders named a litany of cities, towns, mountains, deserts, forests, rivers and other locations after places in ancient Israel: Bethlehem, Bethel, Canaan, Eden, Goshen, Hebron, Jericho, Jerusalem, Mamre, Moriah, Pisgah, Rehoboth, Salem, Sharon, Shiloh, Zion, etc. Colonial charters not only quoted Scripture but adopted specific laws from ancient Israel as the laws of this “new Israel.” To this day, all 50 state constitutions contain references to God.

The first 10 colleges established in America offered courses in Hebrew. The seal of Yale University (established in 1701) includes the words Urim V’Tumim (Light and Perfection), which were written on the breastplate of the Israelite high priest (Exodus 28:30). The seals of Dartmouth University and Columbia University show the name of God written in Hebrew characters.

America’s founders looked back to ancient Israel’s example as no society before or since. Most believed the New Testament teaching that the Church superseded physical Israel as God’s chosen spiritual nation. Some also believed that they were the literal 120th-great-grandchildren of the biblical patriarch Jacob. The French Huguenot magistrate M. le Loyer described an Israelite genealogy for the British in his 1590 book, The Ten Lost Tribes, and many pilgrims married into Huguenot families. (The Huguenots were French Protestants with links to the medieval Waldensians.)

Over a century after Governor Bradford’s death, Samuel Langdon, who graduated from Harvard alongside American founding father Samuel Adams, continued campaigning for Hebrew to be made an official American language.

Like Governor Bradford, Langdon wanted to establish the law of God as the law of America. As the 11th president of Harvard University, he continued pointing people back to the law of Moses. “The Jewish government … was a perfect republic,” he said in a famous sermon he gave in 1788, titled “The Republic of the Israelites: An Example to the American States.” “Let us, therefore, look over [the Israelites’] constitution and laws. … They had both a civil and military establishment under divine direction, and a complete body of judicial laws drawn up and delivered to them by Moses in God’s name. … Instead of the 12 tribes of Israel [13, including the subdivision of the tribe of Joseph], we may substitute the 13 states of the American union ….”

Men like Gov. William Bradford left their posterity an example of beliefs strong enough to make enormous sacrifices and to unify under a good-faith attempt to submit to God. In his grave, Bradford still teaches us this lesson, lying beneath a tombstone carved with three Hebrew words: Adonai ezer hayai (“Adonai the help of my life”).

Today, in Jerusalem’s City of David, a plaque can be visited, set up by the administration of President Donald Trump (see right). It states, in part:

The spiritual bedrock of our values as a nation comes from Jerusalem. It is upon these ideals that the American republic was founded, and the unbreakable bond between the United States and Israel was formed.

The City of David serves as a proud reminder of the glorious heritage of the United States of America.