Riddle Me This: Why Did King Hiram Pay Solomon for Cities He Didn’t Want? 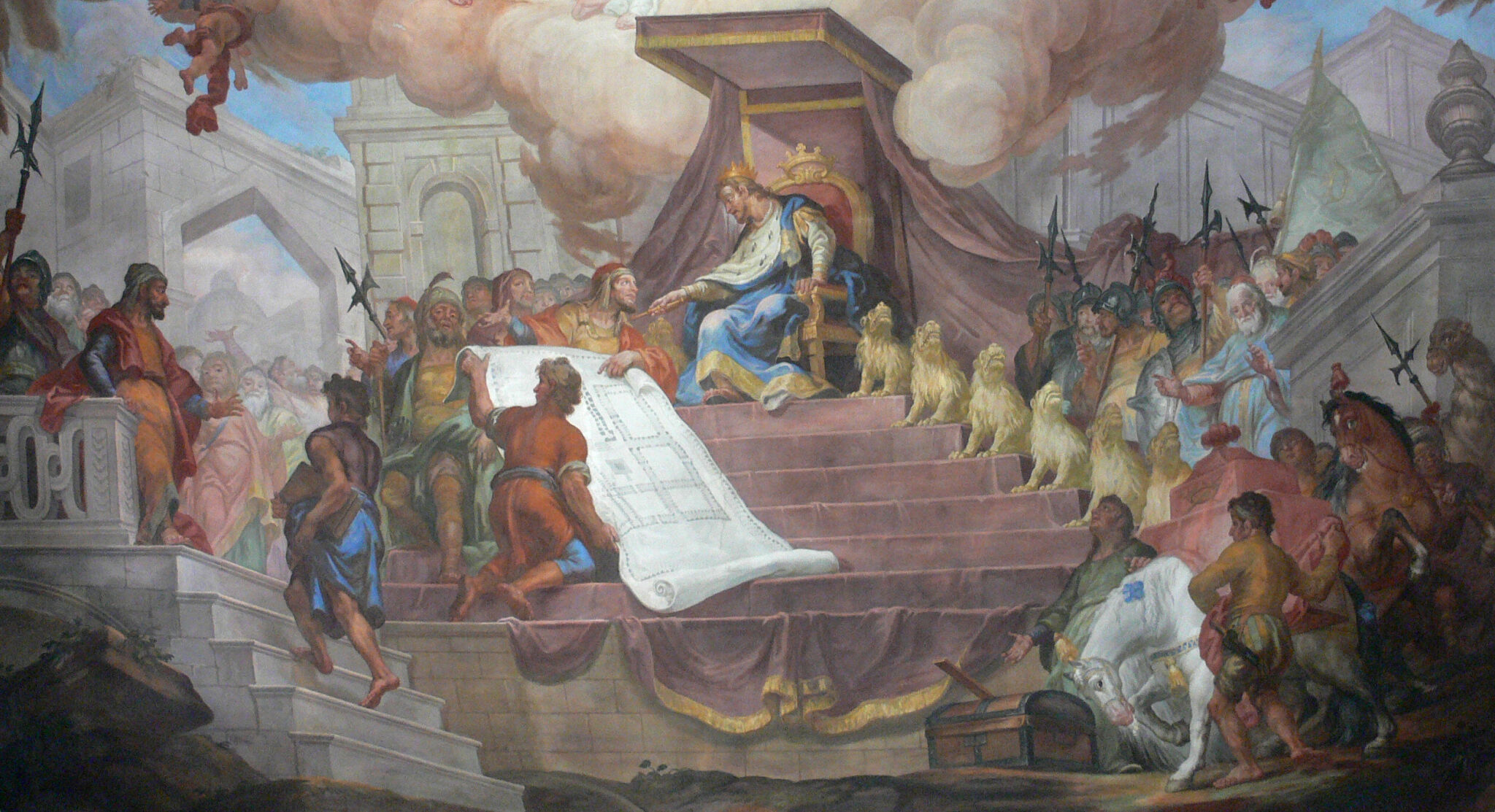 Cartelli di matematica disfida is Italian for “bills of mathematical challenge.” These were infamous in Renaissance-era Italy, where skilled mathematicians would test the mettle of their fellows by issuing a series of challenges to each other to solve. These were the “knightly duels” of the scholarly world, and success meant gaining clients and money, but more importantly, glory and renown. Arguably the most famous of these “duels” had to do with the then seemingly “impossible” general solution to the cubic equation.

There is an interesting biblical parallel to these kinds of mental challenges—from some 2,500 years earlier. In the words of the “Preacher,” Solomon, “there is nothing new under the sun” (Ecclesiastes 1:9).

King Solomon is described in the Bible as having “wisdom [that] excelled the wisdom of all the children of the east, and all the wisdom of Egypt. For he was wiser than all men: than Ethan the Ezrahite, and Heman, and Calcol, and Darda, the sons of Mahol; and his fame was in all the nations round about” (1 Kings 5:9-11; note that aiba uses the Jewish Publication Society translation—certain verses, particularly in 1 Kings, are numbered differently to other translations).

There’s a lot to unpack in this passage—not least, who these men of “wisdom” were. But how was it established that Solomon was “wiser” than them all?

Back to that question in a moment. First: Hiram, King of Tyre. A lifelong friend of King David, who helped with the construction of David’s palace (1 Kings 5:15; 2 Samuel 5:11), Hiram congratulated David’s son Solomon on his coronation. “Blessed be the Lord this day, who hath given unto David a wise son over this great people” (1 Kings 5:21). Hiram aided Solomon in building the temple and, later, his own palace (1 Kings 6-7).

[N]ow Hiram the king of Tyre had furnished Solomon with cedar-trees, and with gold, according to all his desire—that then king Solomon gave Hiram twenty cities in the land of Galilee. And Hiram came out from Tyre to see the cities which Solomon had given him: and they pleased him not. And he said: ‘What cities are these which thou hast given me, my brother?’ And they were called the land of Cabul [“displeasing”], unto this day. And Hiram sent to the king sixscore talents of gold.

So here Hiram supplies numerous goods to Solomon for the building of the temple and his palace, and Solomon gives him cities that evidently prove “displeasing” to Hiram in return—and then Hiram pays Solomon a boatload of money? Clearly, something is “missing in translation” here. Verse 14, the final sentence, doesn’t seem to fit. (As an aside, the land really has continued to be called “Cabul until this day,” as Prof. Amihai Mazar notes in his book Archaeology of the Land of the Bible, 10,000-586 b.c.e., pg. 539: “This ancient name is preserved in the name of the Arab village Cabul which overlooks the Acre Valley in the western Galilee.”)

But upon closer inspection, the paragraph layout of the Masoretic text reveals a paragraph separation of this verse. Though it is sometimes lumped together with the verses before it, verse 13 actually ends with a paragraph marker, and verse 14 begins the new thought: “And Hiram sent to the king sixscore talents of gold.” Again, why?

On this single verse (made up of seven Hebrew words containing 28 letters—Bible numerics enthusiasts out there will note the biblical significance of the number seven), there is actually quite an explanatory discourse in the writings of the first-century c.e. historian Josephus.

In the lengthy work Antiquities of the Jews, Josephus described the earlier account of Hiram’s dissatisfaction over the cities of “Cabul.” He then proceeded to explain the following:

Moreover, the king of Tyre sent sophisms and enigmatical sayings to Solomon, and desired he would solve them, and free them from the ambiguity that was in them. Now so sagacious and understanding was Solomon, that none of these problems were too hard for him; but he conquered them all by his reasonings, and discovered their hidden meaning, and brought it to light. (8.5.3)

Elsewhere, in his shorter work Against Apion, Josephus wrote: “[T]here was another passion, a philosophic inclination of theirs, which cemented the friendship that was betwixt them [Hiram and Solomon]; for they sent mutual problems to one another, with a desire to have them unriddled by each other; wherein Solomon was superior to Hirom, as he was wiser than he in other respects: and many of the epistles that passed between them are still preserved among the Tyrians” (1.17).

Josephus then cited a rather remarkable quote from the otherwise unknown, now lost writings of Dius, which according to Josephus were titled The Histories of the Phoenicians. Dius wrote:

They say further, that Solomon, when he was king of Jerusalem, sent problems to Hirom to be solved, and desired he would send others back for him to solve, and that he who could not solve the problems proposed to him should pay money to him that solved them. And when Hirom had agreed to the proposals, but was not able to solve the problems, he was obliged to pay a great deal of money, as a penalty for the same. As also they relate, that one Abdemon, a man of Tyre, did solve the problems, and propose others which Solomon could not solve, upon which he was obliged to repay a great deal of money to Hirom. (ibid)

Of this “Abdemon” (a name meaning “servant [abd]” of perhaps “Ammon” or “Hammon”) Josephus recalled the writings of the little-known third-to-second-century b.c.e. Menander of Ephesus: “Under this king [Hiram] there was Abdemon, a very youth in age, who always conquered the difficult problems which Solomon, king of Jerusalem, commanded him to explain” (Antiquities, 8.5.3).

This would explain, then—rather colorfully, one could add—the meaning of 1 Kings 9:14: that this out-of-the-blue payment from Hiram was in the context of, in a sense, “cartelli di matematica disfida.” Others, however (such as the Keil and Delitzsch Commentary on the Old Testament), choose to interpret this verse solely in the context of the following scriptures—that the payment simply represented a loan for the ensuing constructions of Hazor, Megiddo and Gezer described in the following verse (specific 10th-century b.c.e. Solomonic constructions that have been remarkably corroborated by archaeological excavations).

It’s certainly a much more mundane explanation, for which time (and further research and discovery) will have to tell. But the writings of Dius and Menander certainly did not emerge out of a vacuum—and their fascinating discourse on an ancient biblical “cartelli di matematica disfida” equivalent would also explain how Solomon could have been considered measurably wiser than the greats of his day, as expounded in 1 Kings 5:10-15:

And Solomon’s wisdom excelled the wisdom of all the children of the east, and all the wisdom of Egypt. For he was wiser than all men: than Ethan the Ezrahite, and Heman, and Calcol, and Darda, the sons of Mahol; and his fame was in all the nations round about. …

And there came of all peoples to hear the wisdom of Solomon, from all kings of the earth, who had heard of his wisdom. And Hiram king of Tyre sent his servants [abdem] unto Solomon ….