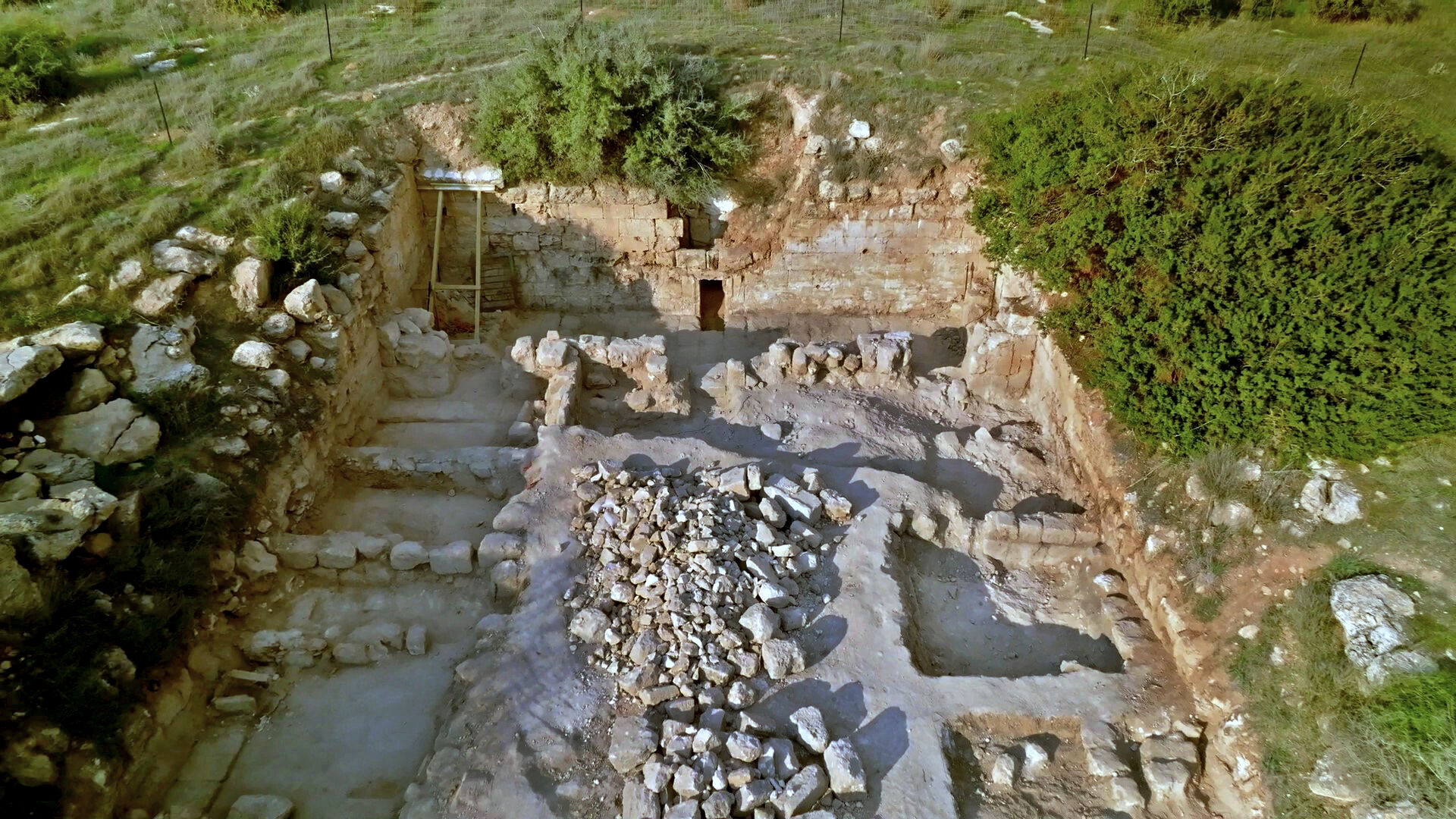 A burial cave dating to the Second Temple Period was uncovered in the Lachish Forest as part of a joint effort between the Israel Antiquities Authority (iaa), the Ministry for Jerusalem and Heritage, and the Jewish National Fund. First exposed 40 years ago by looters and subsequently excavated in part, the iaa is now exposing the “elaborate” cave forecourt, constituting “one of the most impressive” Second Temple Period burial caves ever discovered.

The cave attests to the Jewish tradition of secondary burials, as several chambers were found with multiple rock-hewn “kokhim,” or burial niches, as well as broken ossuaries (stone boxes), within which the remaining bones of an individual were stored following decomposition.

This particular tomb was evidently owned by a wealthy family, given the impressive effort that went into preparing the cave. Typically, the court leading to cave tombs is just hewn out of rock. But the entrance of this cave featured carved stones and mosaics with traditional Jewish symbols such as rosettes and pomegranates.

Family burials were a common practice in the Old Testament. Abraham established a burial cave for his wife Sarah in Genesis 23, and Genesis 49 describes the same tomb as the location in which Abraham, Isaac, Rebekah and Leah were buried. Joshua 24:32 describes how “the bones of Joseph, which the children of Israel brought up out of Egypt, buried they in Shechem, in the parcel of ground which Jacob bought of the sons of Hamor the father of Shechem for a hundred pieces of money; and they became the inheritance of the children of Joseph.”

The cave in Lachish Forest has been called the “Salome Cave.” It actually continued to be venerated in later times—during the Byzantine and Islamic periods—as seen on the crosses and inscriptions engraved on the cave walls. The inscriptions include references to a “Salome.” A figure with the same name is mentioned in the New Testament as a follower of Jesus, who brought spices to Jesus’s tomb to anoint him. Apocryphal tradition also attests to a “Salome” as the midwife of Jesus, and it is based on this particular later tradition “that [the cave was] identified as the burial place of Salome, the midwife of Jesus.” Even after Muslim conquest of the location, this veneration of Salome at the cave continued.

Nir Shimshon-Paran and Zvi Firer, excavation directors of the iaa Southern Region, explain: “The name ‘Salome’ (or in Hebrew, Shalom or Shlomit) was a common Jewish name in the Second Temple Period and was also known in the Hasmonean and Herodian families.”

As relayed by the press release about the cave, the researchers stated: “Salome is a mysterious figure. The family tomb attests that its owners were a family of high status in the Judean Shefelah in the Second Temple Period. The cult of Salome, sanctified in Christianity, belongs to a broader phenomenon, whereby the fifth-century c.e. Christian pilgrims encountered and sanctified Jewish sites.”

Another interesting find at the site was a row of shop stalls in the courtyard, with numerous clay lamps. “In the shop, we found hundreds of complete and broken lamps dating from the eighth–ninth centuries c.e.,” say the excavation directors. “The lamps may have served to light up the cave, or as part of the religious ceremonies, similarly to candles distributed today at the graves of righteous figures, and in churches.”

According to Saar Ganor, the iaa director of the Judean Kings’ Trail Project:

Once the restoration and development works are completed, the forecourt and the cave will be opened to the public, as part of the Judean Kings’ Trail Project in cooperation with the Jewish National Fund and the Ministry for Jerusalem and Heritage. This trail, that crosses the Judean Shefelah, is the backbone of the Jewish people’s cultural heritage, and it encompasses dozens of sites from the time of the Bible, the Second Temple, the Mishnah and the Talmud.