Originally thought to have been imported, an ingenious method of analysis reveals a high-quality alabaster originating in ancient Israel.
By George Haddad • October 4 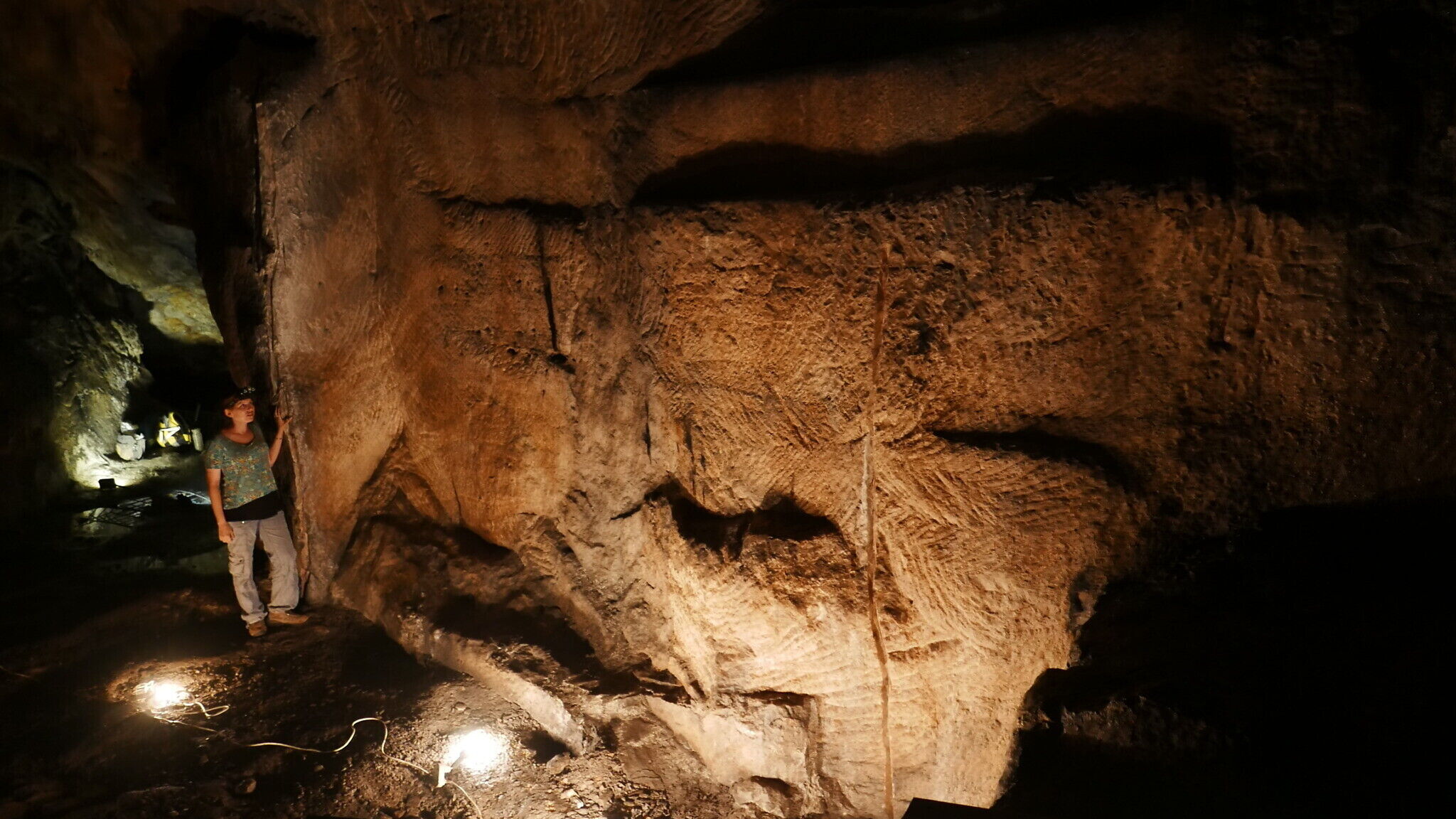 Signs of quarrying-scars and cessation of quarrying are visible on the Te’omim cave walls and floor (Ayala Amir stands on the left).
Prof. Boaz Zissu/Bar-Ilan University

For years, it was believed that ancient alabaster items found in Israel were originally sourced from Egypt. Alabaster was a luxury, and there are many such quarries in Egypt. None, however, had been found in Israel.

But in recent years, multiple people and groups have come together with recent studies to prove that alabaster was quarried in Israel, and from as early as the Middle Bronze Age all the way through the time period of Herod the Great. Research was led by PhD student Ayala Amir and supervised by Prof. Boaz Zissu and Prof. Aren Maeir of the Bar-Ilan University, as well as Prof. Amos Frumkin from Hebrew University. The results of the research were published in May in the academic paper, “Sourcing Herod the Great’s Calcite-Alabaster Bathtubs by a Multi-Analytic Approach.”

In order to test the alabaster items and determine their origins, a chemist was required. So Ayala enlisted the help of her father (and his laboratory), Prof. Amnon Albeck of Bar-Ilan University. Their research led the father-daughter team to the Te’omim cave.

The cave, located near modern-day Bet Shemesh, was discovered to have a calcite-alabaster material. Amir wanted to know in particular if King Herod’s luxury bathtubs, found decades earlier at the Kypros fortress near Jericho and the palace of Herodium (south of Jerusalem), were sourced from Israel or Egypt.

Although the bathtubs weigh a staggering 1.5 metric tons each, it was not uncommon for such heavy items to be transported to Israel in the past. Hence, it was still considered feasible that they were from Egypt. For Herod, quality was what was most important. Josephus recorded in Antiquities of the Jews, 15.11: “And now Herod, in the eighteenth year of his reign, and after the acts already mentioned, undertook a very great work; that is to build of himself the temple of God.” Herod took great pride in his building projects. He was ambitious, and nothing but the best would qualify for his edifices—including even his bathtubs.

The samples from the bathtubs “came out in all ways ‘Israeli,’” Amir said.

The research dramatically changes perspectives on the use of such alabaster in the ancient world, as it means Herod not only had an established domestic alabaster quarry he could source from, but testing reveals that it was also of equal or even superior quality to that of Egyptian alabaster.

“The fact that both bathtubs were unequivocally quarried in Israel and not in Egypt, as we would have expected due to the high quality of the stone, was a particular surprise because that means that Herod the Great used local produce, and that the calcite-alabaster industry in Judea in the second half of the first century b.c. was sufficiently developed and of high enough quality to serve the luxurious standards of Herod, one of the finest builders among the kings of that period.” said Professor Maeir.

The plan moving forward is to use this four-pronged method to test other calcite-alabaster items and determine their source. This will help provide a clearer picture of the extent of Israeli alabaster use. And even further down the road, experts could possibly apply this method to other materials as well.

In our institute’s latest excavation on the Ophel (just south of the Temple Mount), led by Prof. Uzi Leibner, a rare Second Temple-period alabaster item was found, and Professor Leibner elaborated on the uniqueness of such a discovery in Jerusalem.

Another fascinating element to this discovery and analysis is that the Te’omim cave quarry was in use much earlier than Herod’s time. The report states, “U-Th dating results, as well as associated archaeological finds, indicate that major quarrying activities took place in the Te’omim Cave prior to 1500 b.c.e., during the Middle Bronze Age. Later use of the quarry is indicated by an abundance of Late Roman remains that were found on the quarried surfaces in the cave.”

Those who attempt to discredit the biblical account and diminish the significance of ancient Israel have claimed that the nation had to have outsourced its production of high-quality items (such as alabaster) because it neither had the materials nor the skill to obtain such luxury.

But now we are starting to get a clearer picture that Israel did, in fact, have great wealth at its disposal—including the quarrying and craftsmanship ability to utilize such a magnificent raw material.