A Warm Friend of Israel 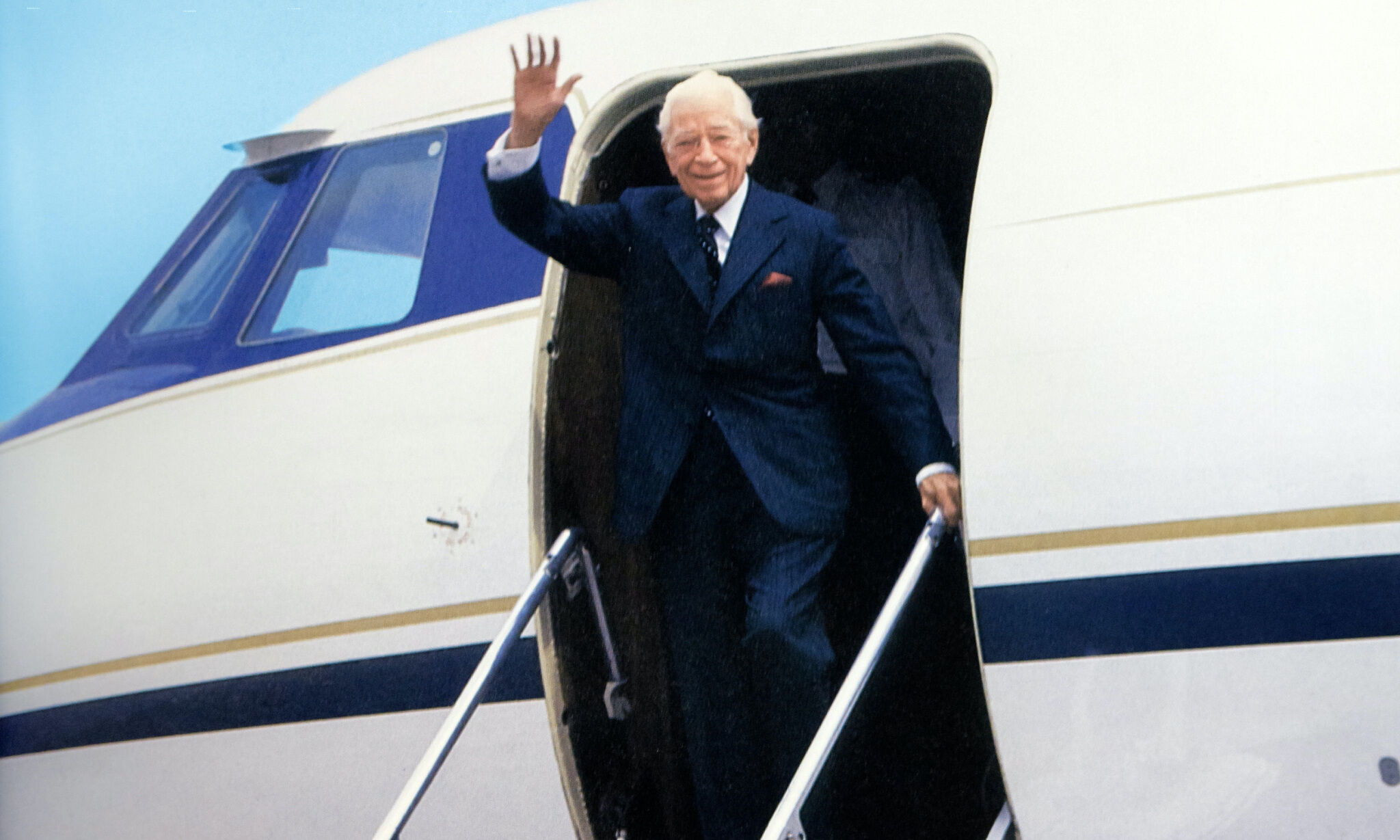 Herbert W. Armstrong had no political party, no royal office, no government commission. He possessed no personal fortune, nor was he backed by any state or corporate interest.

Yet he met personally with dozens of heads of state: prime ministers, presidents, kings, emperors, princes and princesses—and the list goes on. Leaders across the globe respected his message, extended him personal invitations, and collaborated with him. Several became his close friends.

A prolific author, educator, philanthropist and minister, Mr. Armstrong traveled the world sharing his knowledge. Though he met with the greats of the world from Asia to Africa to Europe and beyond, his greatest affection was for one tiny, new country at the heart of the world. He loved Israel, and Israel loved him back.

As a devoted student and teacher of the Bible, Mr. Armstrong believed in the glorious future of Jerusalem. During one four-year period, he traveled to Jerusalem 50 times.

The Start of Something Special

Mr. Armstrong’s friendship with Israel began in 1968 when he became interested in a major new archaeological project in Jerusalem. The dig was situated adjacent to the Western Wall, in territory gained during the Six-Day War. Prof. Benjamin Mazar, director of the Israel Exploration Society and former president of Hebrew University, had been commissioned to lead the excavation. When Mr. Armstrong saw for himself the scope of Professor Mazar’s excavation, he was seized with enthusiasm to support Mazar in the project.

Before the year was finished, Mr. Armstrong was invited to meet with Professor Mazar and Israeli leaders in a private room of the Knesset. It was there that Moshe Kol proposed a “partnership with Israel,” which he called “an iron bridge that can never be broken” between Ambassador College and Hebrew University. Dr. Josef Aviram, dean of the College of Humanities at Hebrew University, also attended the meeting, along with other leaders, offering Mr. Armstrong and the Ambassador men such a warm welcome that Mr. Armstrong found it “inspiring, astonishing and most unusual.”

The Stones of Jerusalem

Between 1968 and 1976, scores of Ambassador students excitedly packed up and flew to Israel to volunteer on the excavation, a massive site on the southern wall of the Temple Mount. In addition to supplying what was praised as the excavation’s most enthusiastic laborers, Ambassador College shouldered half of the cost of the “big dig.” This excavation yielded artifacts dating back to the First Temple period (during the time of the temple originally built by Israel’s King Solomon).

Professor Mazar and Mr. Armstrong had a strong bond, which came easily due to the fact that they shared similar traits. Both were straight-talking and uncompromising. Both were interested in taking the Bible and objectively proving the truth rather than skewing it to fit preconceived beliefs.

After Mr. Armstrong’s death, Professor Mazar wrote, “During the years of our association with him, all of us developed the highest regard for his wonderful personality and qualities. His deep devotion to the ideals of peace and justice in the spirit of the biblical prophets was appreciated by his friends in Israel. His feeling for Israel and Jerusalem was manifested in his true interest in the archaeological excavations near the Temple Mount and in the City of David. His name will always be attached to this most important undertaking carried out in Jerusalem.”

Following Professor Mazar’s excavation, Mr. Armstrong continued to support archaeology in the City of David. From 1980 through the summer of 1985, he sent students and donations to support excavations there led by Yigal Shiloh. Dr. Shiloh graciously accepted the volunteer help, saying he would use Ambassador students exclusively on his archaeological projects if he could. The Ambassador International Cultural Foundation also contributed to an excavation at Tel Zeror in northern Israel. Mr. Armstrong’s support for archaeology spanned 18 years.

The excavations conducted by Hebrew University and Ambassador College finished in 1985. The following year, Herbert W. Armstrong died after more than 50 years of active, vibrant, passionate years of service to the cause of peace and abundant living for all of mankind.

However, those whom Mr. Armstrong entrusted to continue this work rejected his legacy. The college was closed and the campuses sold. The humanitarian and cultural activities of the foundation ceased.

Yet some refused to let the work of Herbert W. Armstrong die. In 1989, another tiny new beginning took place when Gerald Flurry began working to keep Mr. Armstrong’s legacy and work alive.

The Armstrong International Cultural Foundation began in 1996 as the Philadelphia Foundation. Early that year, it took over a project the defunct Ambassador Foundation had abandoned: a collaboration with the Al-Hussein Society in Amman, Jordan, sending volunteers to work with physically and mentally handicapped children.

The foundation went on to support the Petra National Trust and Jerusalem’s Liberty Bell Park. And in 2006, a much greater door suddenly opened up.

During Benjamin Mazar’s excavations in the shadow of the Temple Mount, a young girl frequented the dig site, rubbing elbows with archaeologists, spending time with the Ambassador students, and taking a keen interest in the work. Her name was Eilat.

In 1986, digging again commenced near the Temple Mount. This time it was Eilat Mazar, the professor’s granddaughter, who was heading the project. The younger Mazar focused on the First Temple period at the eastern part of the site.

In August 2005, shortly after commencing digging in the City of David, Dr. Eilat Mazar announced that she and her team had discovered the remains of a large public building that dates to the 10th century b.c.e. Mazar believed that the evidence indicated this structure was none other than the palace of King David.

When Gerald Flurry read about Dr. Mazar’s spectacular discovery, he recalled the history between Eilat’s grandfather and Mr. Armstrong. He instructed his son to make contact with Dr. Mazar and inquire about rekindling the relationship.

Dr. Mazar had many fond memories of the close relationship between her grandfather and Mr. Armstrong. “Without the support of Mr. Armstrong and the Ambassadors, the Temple Mount excavations would have never become, as it did, the most important and largest excavations in Israel at that time,” she said. Dr. Mazar easily recognized the Armstrong foundation’s roots and was thrilled to continue the tradition, remarking that she was “excited to have the Ambassadors back with us.”

The Armstrong International Cultural Foundation and Herbert W. Armstrong College participated in all of Dr. Mazar’s excavations in Jerusalem from 2006 to her death in 2021. They had the pleasure of helping her make a string of remarkable discoveries.

In addition, from 2012–2019, the foundation hosted acclaimed archaeological exhibits at its headquarters in Edmond, Oklahoma, featuring biblical seal impressions from the time of Jeremiah, as well as the seal impressions of King Hezekiah and Isaiah of Judah—all found during Dr. Mazar’s excavations.

Today, the Armstrong Institute of Biblical Archaeology is thrilled to continue the legacy of Herbert W. Armstrong—an unofficial ambassador for world peace, a great educator, a close acquaintance of world leaders, and a warm friend of Israel.