A fascinating new study furthers our understanding of one of ancient Jerusalem’s most iconic features.
By Christopher Eames 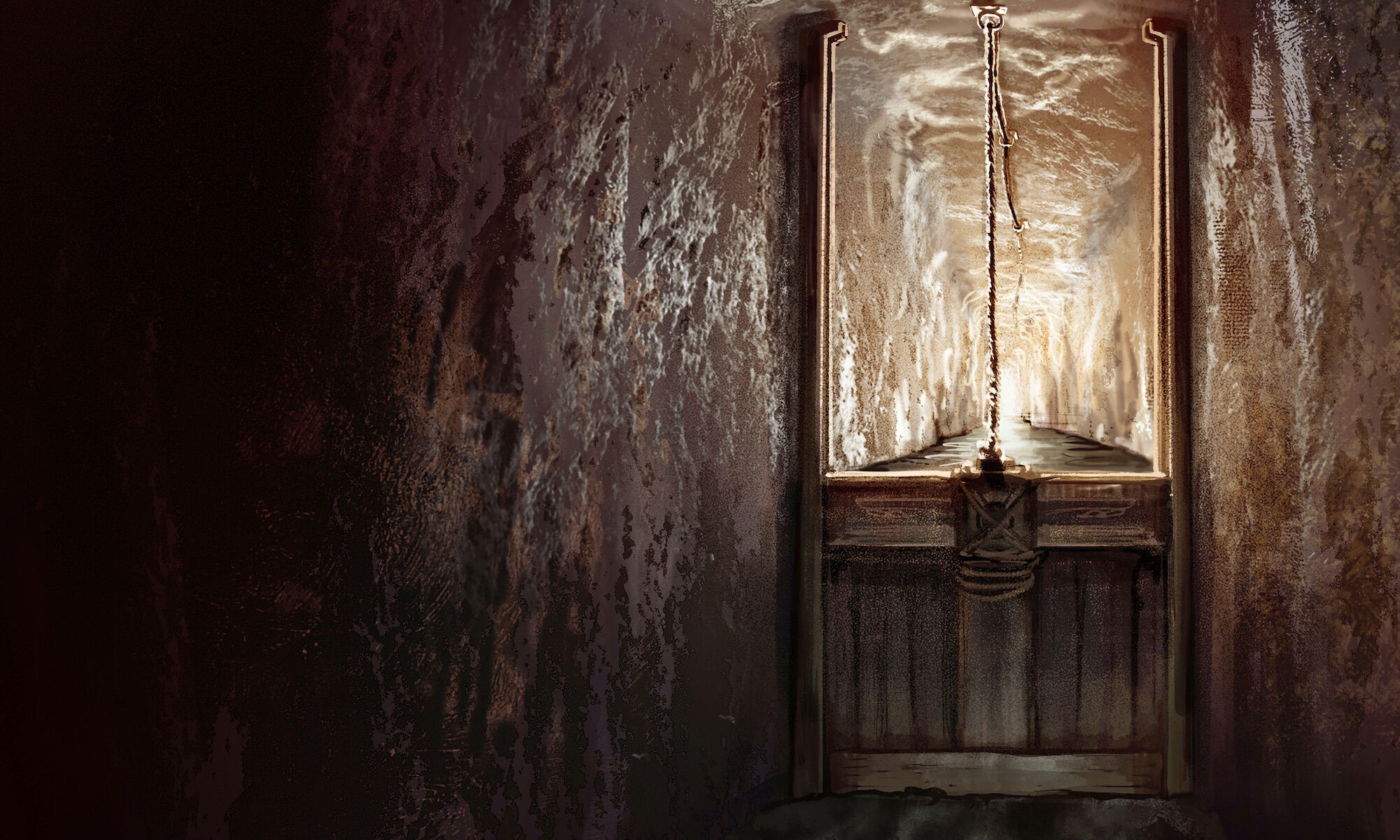 If you’ve ever walked through Hezekiah’s tunnel, perhaps you’ve wondered if there’s a purpose for the noticeably higher ceiling at the southern end of the tunnel? Maybe you wondered why, when the water is less than knee-deep, there is occasionally a visible “waterline” much higher up on the walls?

What about the implications of Hezekiah channeling water away from the Gihon Spring reservoir complex? Wouldn’t water gushing down to the lower pool deplete the upper pool, depriving the people and buildings in the upper city easy access to water?

These questions have been answered, at least in part, through a fascinating new research project published in April in the academic journal Archaeological Discovery. The article is titled “A Sluice Gate in Hezekiah’s (Iron Age ii) Aqueduct in Jerusalem: Archaeology, Architecture and the Petrochemical Setting of Its Micro and Macro Structures.” It was authored by Aryeh E. Shimron, Vitaly Gutkin and Vladimir Uvarov, researchers from the Geological Survey of Israel and Hebrew University’s Center for Nanoscience and Nanotechnology. The article reveals new evidence showing that Hezekiah’s tunnel contained an ingenious sluice gate that allowed the water level to be controlled.

What is a sluice gate? Essentially, it’s a type of gate that can be raised or lowered vertically to control the water level. Think about England’s numerous canals: The water levels in many are controlled by a sluice gate.

The biblical overview of Hezekiah’s tunnel, including the reason for its construction, is fairly well established. Constructed at the end of the eighth century b.c.e., it was built around the time of the Assyrian king Sennacherib’s invasion of Judah. The tunnel was designed to divert Gihon Spring water from the more vulnerable eastern side of the City of David down to the Siloam pool catchment area in the lower southern part of the city.

The tunnel’s construction is recorded in 2 Chronicles 32. “And when Hezekiah saw that Sennacherib was come, and that he was purposed to fight against Jerusalem, he took counsel with his princes and his mighty men to stop the waters of the fountains which were without the city; and they helped him. So there was gathered much people together, and they stopped all the fountains, and the brook that flowed through the midst of the land, saying: ‘Why should the kings of Assyria come, and find much water?’” (verses 2-4).

Verse 30 reads: “This same Hezekiah also stopped the upper watercourse of Gihon, and brought it straight down to the west side of the city of David. And Hezekiah prospered in all his works” (King James Version).

The tunnel is a marvel of human engineering. Hezekiah’s laborers not only carved the 533-meter-long Siloam Tunnel (as it is sometimes called) through solid rock, they worked simultaneously from both ends of the tunnel. It doesn’t take much imagination to appreciate the stunning level of engineering and surveying required to do this. How did Hezekiah’s engineers develop a plan that allowed workers to work from both sides but meet at exactly the same point? And how did they not only determine, but then accomplish, the perfect gradient? (The gradient of the tunnel is 0.06 degrees. The exit elevation is just 30 centimeters lower than the starting elevation.)

For Hezekiah’s engineers, figuring out the path and gradient of the tunnel wasn’t the only challenge they faced. One of the big challenges noted by the authors of the above-mentioned academic paper is that the diversion of the Gihon Spring water through the tunnel would have lowered the water level so significantly that the spring would no longer have been able to fill the existing upper Gihon catchment area. This area is fed by a cavern conduit located 2.4 meters above the mouth of the spring.

The redirection of water would make the water level so low in the upper part of the city as to render it virtually inaccessible. “In the absence of the frequently erratic ebb and flow (pulsating) nature of the spring, this elevation would not suffice for the water to enter Channels ii, the Rock-cut Pool and fill the WS [Warren’s Shaft] cave to a minimum level for drawing water,” they wrote. So rather than Hezekiah’s tunnel fully solving a problem, it would have created a new one. It would have essentially restricted or eliminated the flow of water through Warren’s Shaft to the upper side of the city where critical infrastructure, including the royal palace and the temple, were situated.

Scientists have puzzled over this question. How exactly did Hezekiah’s engineers build a tunnel that did not drain the upper reservoir area entirely? The authors cited one solution presented by geologist Dr. Dan Gill in 1994. Gill posited that in order for water to still be readily accessible from the infrastructure around the mouth of the Gihon Spring, “a dam must have been constructed somewhere along Hezekiah’s tunnel,” allowing the water level to rise sufficiently to fill the original raised catchment complex above the spring.

Obviously, the notion of going to all the effort to excavate Hezekiah’s tunnel (and at such a precise gradient) only to dam it up seems counterintuitive. This, therefore, could not have been any ordinary dam.

The new research paper takes this theory much further. Shimron, Gutkin and Uvarov wrote: “We have searched for such a dam at what would be the ideal, perhaps only location for such a structure to be able to function effectively, and have found physical evidence for what may have been a movable blocking wall (sluice) at precisely such a place. [This] ‘device’ to control water level in the new aqueduct and thereby also the spring environ was designed and eventually constructed about 71 meters from the tunnel’s southern exit” (emphasis added).

The evidence for a sluice gate is compelling.

A sluice gate is typically a wood or metal sliding barrier set into grooves on the side walls of a waterway. The gate can be raised or lowered to control the flow of water through the passage. Placing a sufficiently sealing sluice gate at some point within the tunnel would have allowed the water level to rise high enough to fill the raised, upper catchment system around the mouth of the Gihon Spring. The sluice would have also allowed a degree of selective control over water levels for the upper and lower parts of the city. If one part of the city or the other needed a greater supply of water, levels could be adjusted accordingly with the sluice gate. This degree of control would have also proved helpful in a siege situation, giving the ability to selectively cut off easy access to water, depending on the situation.

The Archaeological Discovery article revealed several compelling proofs for the presence of an original sluice gate within the tunnel.

The first and most important proof is the discovery of four 8-centimeter-long iron bolts or nails sunk into the bedrock walls of the tunnel, 71 meters from the tunnel’s exit. The badly corroded bolts are symmetrically placed, two on each side of the tunnel’s walls. Traces of petrified wood (almost certainly cedar) were found on the bolts, indicating that they secured some kind of wooden frame within the tunnel.

Interestingly, at this exact point in the tunnel the ceiling is significantly higher. A higher ceiling would have been necessary for a tall, vertically sliding gate to rise and fall.

What about the operation of the gate? How was it raised and lowered? The researchers note another unique feature not far from this point in the tunnel. Here, a narrow shaft extends from the tunnel’s ceiling (see image) through to an accessible subterranean passage (known as Channel ii) and out to the surface. According to the scientists, a rope passing through this narrow “shaft to surface” would have allowed operators to raise and lower the gate.

To test this theory, the researchers searched for evidence of rope material. Sure enough, in the plaster material of this part of the tunnel ceiling, they discovered calcified wool fibers— evidence of rope.

Further evidence of a sluice gate is present on the walls of Hezekiah’s tunnel. If you have walked the tunnel, you have probably seen the horizontal residue lines of silt and mud staining on the tunnel walls. Through much of the tunnel, this “dominant waterline” is 1.5 meters high, suggesting the water was at one time consistently dammed to this regulated height. Logically, this required some sort of damming device—like a sluice gate.

On this point, Shimron, Gutkin and Uvarov pointed out the importance the tunnel engineers placed on sealing gaps and cracks in the bedrock leading up to the sluice gate. They noted the heavy use of hydraulic plaster, carbon-dated to the eighth century b.c.e. This, together with the dating of the fine sedimental laminae along the tunnel walls, “indicate[s] that some of the most pronounced and highest watermark levels were deposited between the eighth and fourth centuries b.c.e., thereby confirming water level control already during this period,” they wrote.

“The construction of the sluice gate and the application of plaster along the full length of the tunnel would have required a dry tunnel for carrying out this task. The most convenient time for this would have been prior to allowing water flow south towards the Siloam Pool—that is during Iron Age ii” (ibid).

Finally, the authors noted that not only would this structure have been a significant innovation of its own right, but it would also constitute “to the best of our knowledge, the oldest sluice gate known.” “To the best of our knowledge no sluice gates have been recorded that predate the Roman ~first–second century c.e. period. The oldest Iron Age structures referred to as sluice gates were found in the Judean Desert (Stager, 1976). Constructed to raise the level of water behind a stationary stone dam, these structures are weirs rather than sluice gates. Consequently, if Hezekiah’s tunnel sluice ever functioned as a movable blocking wall, it may well be the oldest sluice gate on record.”

Such an innovation would hardly be surprising for the likes of the Jewish nation, however—whether in modern times or anciently. 2 Chronicles 26, for example, records the ingenuity of Jerusalem’s engineers during the reign of King Uzziah (in the early eighth century). “And he made in Jerusalem engines, invented by skillful men, to be on the towers and upon the corners …” (verse 15).

This new research only adds a new layer of intrigue to the already incredible engineering feat that is Hezekiah’s tunnel. “Now the rest of the acts of Hezekiah, and all his might, and how he made the pool, and the conduit, and brought water into the city, are they not written in the book of the chronicles of the kings of Judah?” (2 Kings 20:20).