A remarkable discovery, if the official assessment is true—but we are left with more questions than answers.
By Christopher Eames • April 28, 2022 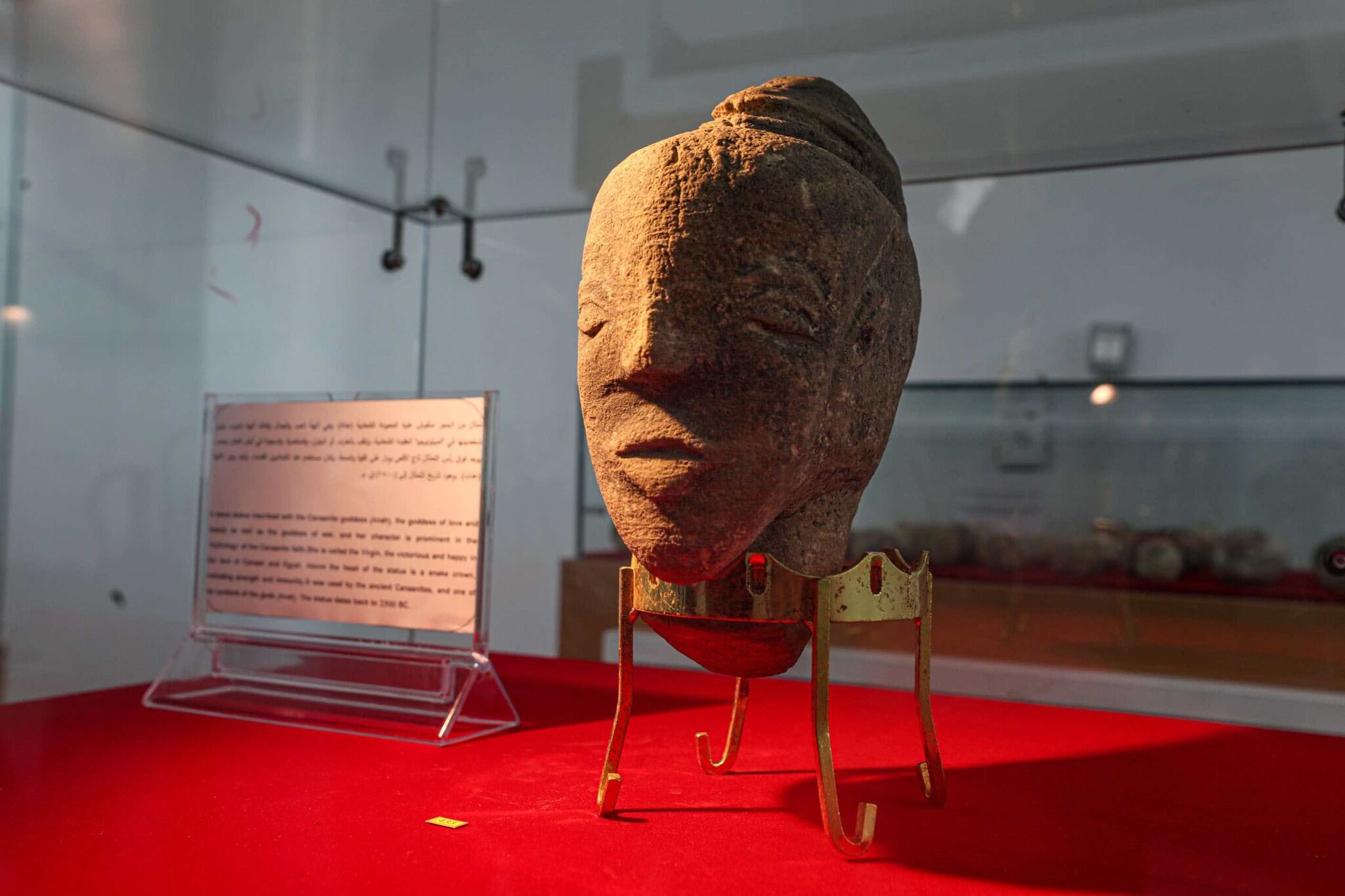 A sculpture of Canaanite goddess “Anat” is displayed in Gaza City after its discovery by a Palestinian farmer on April 25, 2022.
Mustafa Hassona/Anadolu Agency via Getty Images

A farmer from Khan Yunis, a city in the southern Gaza Strip, made headlines around the world this week after uncovering a peculiar object while plowing his field. The object, a carved stone idol head, has been identified by Gaza’s Hamas-led Ministry of Tourism and Antiquities as that of the Canaanite goddess Anat and dated to roughly 2500 b.c.e. The 22-centimeter-tall limestone head, topped with a snake “crown,” has since gone on display in Gaza City’s Qasr al-Basha Museum.

Anat is a well-known Canaanite deity whose name is found several times in the Bible, often in connection with this coastal Canaanite/Philistine territory. “Shamgar ben Anath” is one such example: a warrior in this region bearing what archaeology has shown to be a title linked to the Anat deity (see Judges 3:31 and our article on the subject here). Evidence of the worship of Anat, known primarily as a goddess of war (and also sometimes associated with serpents), is found throughout the Levant and Egypt, especially during the second millennium b.c.e.

Gaza: The Ministry of Tourism and Antiquities in Gaza announces the discovery of a Canaanite statue inside a land in Khan Yunis in the southern Gaza Strip, dating back to 2500 BC. pic.twitter.com/o3Zsw6L06F

Yet a significant degree of ambiguity surrounds this find. It is of an extremely odd, unique design, and the fact that it was discovered without surrounding archaeological context makes its dating mere guesswork. There is no way to clearly date such a stand-alone stone item; radiocarbon dating is out of the question, as this is not organic material. The task of dating the artifact is only made harder, if not impossible, by the lack of clear parallel archaeological finds.

If the sculptured head does depict the Canaanite goddess, this would perhaps naturally suggest a date sometime during the second millennium b.c.e., the period in which this goddess is particularly well attested. Yet the rough date provided for the Khan Yunis head is nearly 1,000 years earlier, during the mid-third millennium b.c.e. It is uncertain how this date of 4,500 years ago was determined. The dating is, at best, guesswork. At worst, it is ideologically driven.

Indeed, the artifact has already been used to this end. At the Tuesday unveiling of the statue, Ministry of Tourism and Antiquities director Jamal Abu Rida announced: “Such discoveries prove that Palestine has civilization and history, and no one can deny or falsify this history …. This is the Palestinian people and their ancient Canaanite civilization.” He continued:

The specialized technical staff at the Ministry of Tourism and Antiquities examined the statue, which is on display in front of you, and it turned out to belong to the Canaanite goddess Anat, which was the goddess of love, beauty and war, according to the Canaanite mythology, and the statue is approximately 4,500 years old ….

Similar sentiments about the discovery have been expressed across social media—that the discovery somehow, to some degree or another, “proves” Palestinian territorial claims. (Other more skeptical users, meanwhile, have noted how suspiciously “off” and “clumsy” the sculpture looks, including its unusually early dating.)

Prof. Aren Maeir, an archaeologist known for his excavations of the famous (and somewhat related) Philistine site of Gath/Tell es-Safi, has expressed doubts about the discovery. “I don’t recognize the statue as anything I have seen before. I don’t recognize it so I don’t know what it is. It is hard to say from what period it is.” He summed it up as follows: “If it is real, it is a very interesting find, but that is about it. It could be something completely new or could have been brought from somewhere else.”

A Palestinian farmer working his land in Gaza has uncovered the head of a 4,500-year-old statue of Canaanite goddess Anat. https://t.co/YQgxmM9XAT

It could be viewed as unusual that the item was reportedly discovered by the farmer while plowing a field on Monday, released after being “carefully examined by experts” at a press conference on Tuesday, and immediately put on display at a museum. Oftentimes, it takes months—even years—of closely guarded study, which often includes a peer-review process, before such a find is officially released to the public. Additionally unusual is that no experts or researchers are cited for the interpretation of the discovery (at least in English-language reports).

The reporting on the discovery is also somewhat contradictory. One article states that the interviewed farmer “added that he had not thought of selling the piece and instead donated it to the museum, as he felt it belonged to the Palestinian people.” However, another interview quotes the farmer as saying: “At first, I hoped to sell it to someone to make some money, but an archaeologist told me that it was of great archaeological value.” Benefit of the doubt could be given—the above could simply reflect poor reporting or information lost in translation. But it certainly doesn’t help in a scientific field of inherent skepticism even under the best of circumstances.

That archaeological discoveries made within the Gaza Strip are often viewed with caution, and at times even suspicion, is understandable, especially when considering the treatment of antiquities by the Hamas-run government. In 2017, for example, the important Canaanite site Tel Es-Sakan—an exceptionally large and significant Canaanite city, excavated by a French and Palestinian team nearly 25 years ago—was bulldozed for urban and military development. In 2013, the 3,000-year-old Anthedon Harbor was likewise bulldozed for the construction of a military training camp.

That same year, a remarkable life-sized bronze statue of the Greek god Apollo was reportedly discovered off the coast by a fisherman. After it briefly appeared for sale on eBay, Hamas police were notified of the sale by an eagle-eyed Italian journalist. The artifact was summarily seized by police—but has since disappeared entirely. (Only a few photos of the statue are known; yet based on the level of preservation shown in the pictures, even the account of its discovery at sea has been called into question.) As noted by the Associated Press, “discovered antiquities [within Gaza] frequently disappear.”

Hopefully, further study will be able to shed more light on this most recent discovery. If authentic and ancient, it could prove to be an important find. Yet if recent history is anything to go by, the prospect of that being the case is not great.