Interview With Dr. Stripling: Joshua, Mt. Ebal and the Discovery of an Ancient Hebrew Amulet 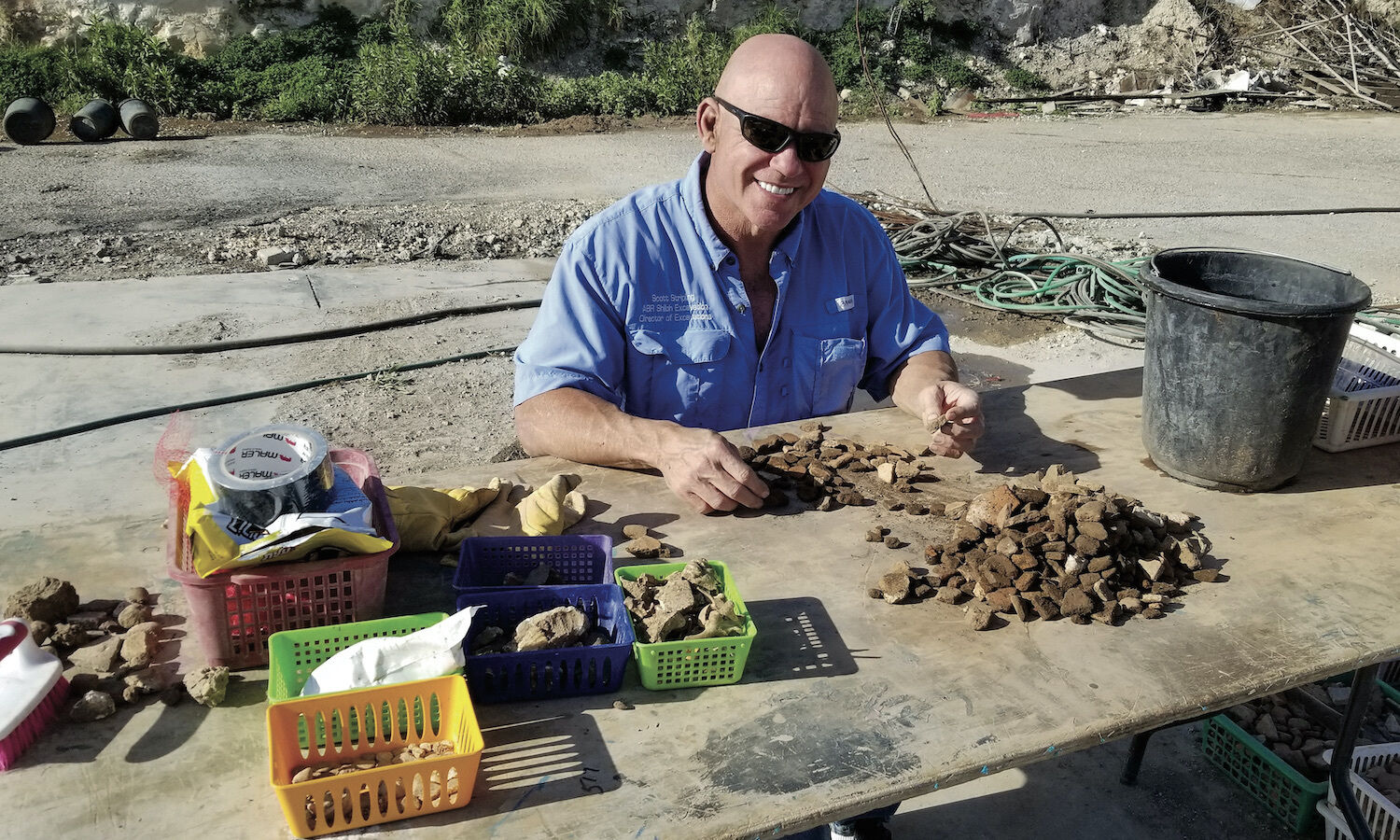 Archaeologist Scott Stripling is the provost at The Bible Seminary in Katy (Houston), Texas, and is the director of excavations for the Associates for Biblical Research at Khirbet el-Maqatir and Shiloh, Israel. In January, Let the Stones Speak assistant managing editor Brent Nagtegaal interviewed Dr. Stripling and discussed his effort to examine fill from excavations conducted by the late Prof. Adam Zertal on Mount Ebal.

Brent Nagtegaal: Let’s start with the Jerusalem Post article from this week: “Ancient Hebrew Amulet Discovered at Joshua’s Altar in Samaria.” This was a pretty sensational article. Tell us about Joshua’s altar and this amulet and your part in all of this.

Scott Stripling: Sure. We have been excavating in the highlands of Israel since 1979, first at Khirbet Nisya, then at Khirbet el-Maqatir, and now Shiloh. [These are all] conquest sites. After Ai (which we believe is Khirbet el-Maqatir), the biblical text tells us that the Israelites went north and renewed their covenant at Mount Ebal and Mount Gerizim. Ancient Shechem is in the middle, of course. Joshua 8:30 says that Joshua built an altar on Mount Ebal.

[Prof.] Adam Zertal discovered this [archaeological site] in his Manasseh survey and in the 1980s excavated the site. Zertal was shocked to discover that it was indeed an altar. He was coming from more of a secular training and mindset. It [the discovery of the altar] caused him to believe in the historicity of the [biblical] text. Sadly, Zertal died before his final publications were done, but he did do a very good preliminary report which he published in Tel Aviv (the archaeology journal).

An entire issue of Tel Aviv was devoted to it, about 100 pages. Zertal documented his discovery of a rectangular altar that had been intentionally covered and at the geometric center of that altar was an earlier round altar that was clearly older. It had been protected and venerated by the later rectangular altar.

BN: What was the reaction to Professor Zertal’s assertion that he had discovered Joshua’s altar on Mount Ebal?

SS: As you know, Tel Aviv is a very secular environment; so they were kind of shocked. [Many thought] Adam has gone off the reservation, so to speak. He was ignored to some extent initially, [though] eventually people did engage with him. [Some] people of great esteem, like Anson Rainey, did not believe that it was an altar, for example. [Dr.] William Dever tended to take issue with Zertal as well. But many others were open to the possibility and were awaiting his final publication, which unfortunately we never got.

BN: Tell us about the two altars, the square altar and the circular altar at the center. How does this happen?

SS: OK. We have a 2-by-2 meter in diameter round altar that is at the perfect geometric center of the later rectangular altar. Zertal’s own recorded belief was that the later altar was intentionally built to venerate and protect the earlier altar, which was a temenos [or holy place].

Unfortunately, very little attention has been paid to [the round altar]. Many people focus on the rectangular altar as Joshua’s altar. [But] it appears to me that people later in the Iron age, probably early in Iron i, built this [larger square altar] to venerate the cultic site on Mount Ebal.

BN: So Professor Zertal found two altars. He excavated the large square altar, but never fully excavated the round altar in the center. Where do you fit into the picture?

SS: That’s correct. Zertal left part of the round altar unexcavated. In a perfect world, we would like to excavate it and excavate the entire area with new technology, get good clean carbon dates, get fresh pottery, fresh faunal analysis. Unfortunately, [due to the political situation] we cannot excavate Mount Ebal. But we were able to do something really cool.

BN: What was that?

SS: In December 2019, I was able to take a team and wet-sift about 30 percent of Zertal’s dump piles. He had two huge dump piles, one on the east and one on the west. About 75 to 80 percent of our material came from the east dump pile. We dry-sifted it (again), and then we wet-sifted it. So it wasn’t excavation. It was a reexamination of the discarded material.

[Prof Zertal was very thorough and did a great job sifting the dump], but nobody can get everything without wet-sifting. We found over 300 pieces of diagnostic pottery, a number of diagnostic flints and some important objects. And most importantly, [we found a] small lead tablet that appears to be a defixio, [or what is commonly called a] “curse tablet.”

BN: This tiny curse tablet measured 2 centimeters by 2 centimeters and was made from lead. And it was folded, which suggested there might be something inside it. Tell us more about this tablet. Were you there when it was discovered? Where is it now?

SS: Yes, my team discovered it. After we had dry-sifted the material, it went through the wet-sifting protocols. After that, the trays go to a supervisor to check. One of our staff members, Frankie Snyder, who is very experienced, recognized it and showed it to me. I grabbed my heart because I knew what I saw—that it was a defixio. These are more common in the Hellenistic and Roman periods, but they can exist much earlier.

BN: Is there anything written on this curse tablet? There has been some discussion that there’s an aleph on it? Tell us why this would be exciting.

SS: Sure, we believe that we can see, with the naked eye, symbols on the outside—glyptic remains. What appeared to be a lotus flower, you know, what might be a Hebrew letter, for example. But we are only looking at the outside of it. There’s no way we could, with the naked eye, see the inside. [But] we have partnered with a laboratory in Prague that has expertise in scanning through lead and seeing letters. Yes, there do appear to be Hebrew letters. But I want to be cautious. I say “appear” because it is still early. We are still researching. All I can say right now is that we do appear to have Hebrew text and some symbols. Hopefully later this year we will be able to tell people what the text actually says.

BN: If there is an aleph, why might this be a double bonus?

SS: Well, if that’s indeed the case, we have the word ARUR, the Hebrew word for curse: aleph, resh, resh. That’s how the curse formulas come to us in the biblical text. If this is indeed what we have, then it could be that we have a formulaic curse, and Mt. Ebal is the mountain of the curse. For example, “Blessed is the man who honors his father and mother,” from Mt. Gerizim. From Mt. Ebal it’s “Cursed is the man who doesn’t honor his father and mother.”

BN: This would be a sensational discovery. We would not only have ancient Hebrew text but text that actually says “curse”—and on the mountain the Bible says Israel rehearsed curses.

BN: Tell us about the dumps you excavated. Did all the remains date to Iron i, or did you find later period remains as well?

SS: That is a very good question. Our ceramic analysis was similar to Zertal’s, but slightly different. We have about 96 percent of the pottery being Iron i. Then we have about 3.5 percent from the Late Bronze. Then we have less than a percent, less than a half a percent as a matter of fact, that would be early Roman. Now having said that, these [curse] tablets more typically would date to the Hellenistic and Roman periods.

Zertal didn’t publish much about the Late Bronze pottery. He probably thought it wasn’t consequential enough to mention. But I will mention that we found a tiny amount of it. So if you are weighing the ceramic analysis, you would say it’s highly likely that you’re dealing with something from the Iron Age or the Bronze Age.

BN: I know it’s early, but let’s assume the curse tablet contains an ancient Hebrew inscription and that it is dated to the Late Bronze or Iron i period. What would that discovery mean?

SS: If it is proto-alphabetic, then you are talking about potentially the earliest Hebrew writing that we have. That is enormous, especially if it appears to be part of recorded Scripture. [If this is the case], then it becomes very difficult for people to argue that the text of Scripture wasn’t recorded until the Hellenistic period or slightly before that. But again, this is speculative.

BN: I understand. But what is your sense right now? Based on the lab analysis so far, do you think we will have a good reading of the text inside this amulet?

SS: I hope so. It will come down to the quality of the scans. What we see so far is positive, but there are thousands of scans to be done and a lot of data to be processed, and this takes time. But yes, we are sort of daily now getting new looks at the different levels and angles and what we are seeing is encouraging. But we want to dot every “i” and cross every “t.”

BN: Right, I understand. We really want the science to be right. In conclusion, let’s talk about another angle of Joshua’s conquest. This interview will be printed around the time of Passover. The Bible tells us the Israelites entered the Promised Land around this time period. You have excavated at Ai, Shiloh and now Mount Ebal. How much evidence do we have that supports the biblical record of Israel’s entrance into the land of Canaan?

SS: Great question. Remember that Joshua set up the tabernacle in Shiloh (we read this in Joshua 18:1) and lived decades after that point. This is a whole other program for another time, but the evidence of the sacrificial system that we’re uncovering there is really staggering. It also goes to that Late Bronze ib and Late Bronze iia horizon as well … so I would say verisimilitude. I think we have a consistency with what we see in the material culture and what we read in the ancient text. When you take sort of this processualism, regional approach, and get the macro and the micro, and bring them together and juxtapose them—we see at Ai, we see at Shiloh, we see at Mt. Ebal, a consistency of a picture that is beginning to unfold of early Israelite arrival.

I think that we can safely say that, as Passover is celebrated this year, that we are not just dealing with a myth, but we are dealing with reality.

BN: Great! Well, thank you very much and keep up the wonderful work.