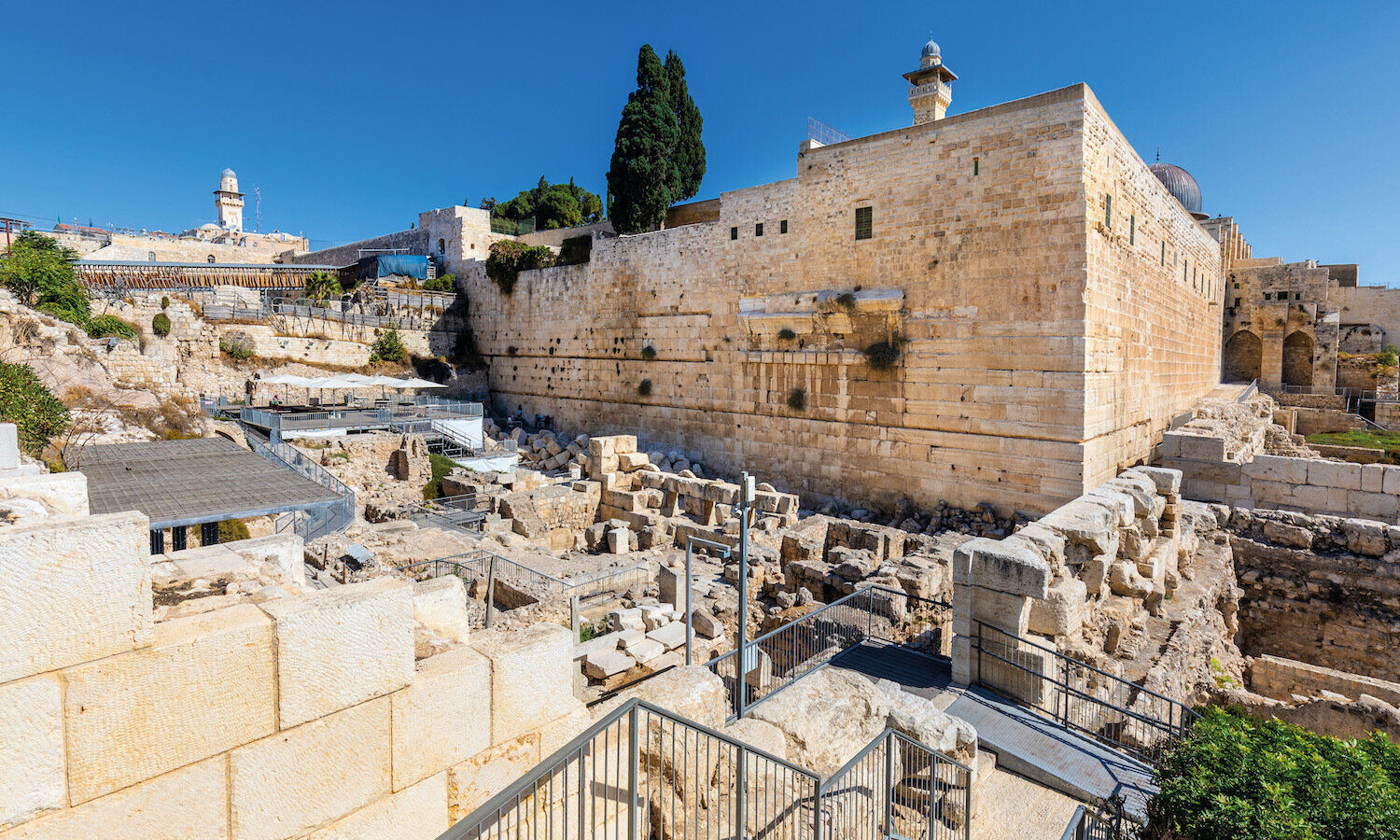 From the September-October 2022 Let the Stones Speak Magazine Issue

Eilat spent the better part of her teen years assisting her grandfather in the Temple Mount excavations. Mazar noted that due to her grandfather’s ailing health in the late ’70s, the dig was forced to shut down rather “messily.” During this time a lot of items went missing or were stolen, and some documents were lost.

After she finished her mandatory military service and obtained her university degree, Dr. Mazar picked up her grandfather’s baton. She collected all his research, and throughout her career—in between raising four children and conducting excavations in Achziv, the City of David and on the Ophel—worked to process, document and publish her grandfather’s findings. Eilat worked on her grandfather’s Temple Mount project right up until she could no longer write.

Dr. Mazar and her team spent years photographing, drawing, and carefully documenting every single stone in the Temple Mount walls. Her two-volume set, titled The Walls of the Temple Mount (published 2012), displays their research in high-quality 1:300-scale maps and drawings.

The book also serves to preserve in book form the Temple Mount walls as they currently stand; Dr. Mazar was a passionate activist against the Islamic Waqf ‘s destruction and desecration of the Temple Mount, including the deteriorating state of its walls.

Robinson’s Arch is a famous ruin affixed to the southern end of the Temple Mount’s Western Wall. The partially preserved, nearly 14-meter-wide arched walkway, seen emerging from the southwest corner of the Temple Mount, was first clearly documented by Bible scholar Edward Robinson in 1838. There was a lot of speculation about the nature of this walkway, constructed by the first-century King Herod. Where did it go exactly? What did it look like?

Part of Prof. Benjamin Mazar’s excavations took place directly below Robinson’s Arch. When the excavations began, the arch was roughly at head-height; by the time they had dug down and reached the original Herodian street level, the arch stood an impressive 21 meters above ground. In other words, this staircase was more than 20 meters high!

Professor Mazar discovered a row of vaults that served as foundations for the arched walkway piers, running directly west from the Temple Mount and then directly south, at a right angle. As such, the prevalent belief was that this was simply a preposterously huge one-way flight of stairs up to the Temple Mount from the street. Professor Mazar’s architect, however, felt that there must be something more than just a one-way staircase.

In the decades following her grandfather’s death, Dr. Mazar realized he had misdated a handful of structures west of Robinson’s Arch that had, over the centuries, been broken down and incorporated into Islamic buildings. She realized these were the remains of additional piers, continuing both farther west, down into the Tyropoeon Valley, as well as north, alongside the Temple Mount!

As she wrote in her final book, Over the Crossroads of Time: Jerusalem’s Temple Mount Monumental Staircases: “With four turns—not the one suggested by B. Mazar—this was a Four-Way Monumental Staircase, unique among the structures of the classical world.”

King Herod was known as Jerusalem’s greatest builder since Solomon, so such a grand, unique staircase fits his reputation. King Herod started his work on the temple in 19 b.c.e. and completed much of it before dying in 4 b.c.e. However, construction on the temple continued during the following decades. It seems storefronts that were eventually built into the piers along the street level weren’t fully developed until the governorship of Pontius Pilate, or King Agrippa i (circa 26–36 c.e.). This means that the complete, grand construction—surely among the most impressive in the known world at that time—was only finished for a few decades before it was destroyed by the Romans in c.e. 70.

Professor Mazar’s excavations below Robinson’s Arch included another discovery, which remained buried in his archives and was only revealed for the first time in March 2021, two months before Dr. Mazar died. This special, tiny discovery was a gold “baby’s ring.” This was the last find released by Dr. Mazar before her death.

The miniature, 2,000-year-old gold ring was etched with a seven-branched menorah symbol. The ring had been buried within a Herodian layer, inside a vault located outside the Temple Mount walls. It was roughly dated to the early first century c.e. Due to its miniature size (less than 1 centimeter in diameter), Dr. Mazar pointed out that the ring “could fit only the finger of a newborn.”

Fittingly, even this latest discovery of Dr. Mazar goes together with a particular passage, this time from the New Testament. The book of Matthew, chapter 2, describes the arrival of the “wise men” from the East to visit the newborn Jesus (verse 1). When they came, “they saw the young child with Mary his mother, and fell down, and worshipped him: and when they had opened their treasures, they presented unto him gifts; gold, and frankincense, and myrrh” (verse 11; King James Version). Another New Testament passage, 1 Timothy 2:9, uses this very specific word for “gold” to refer directly to gold jewelry.

Here, then, is a biblical account of a Jewish newborn, during the Herodian period, being gifted some sort of precious gold trinkets. This corresponds with Dr. Mazar’s discovery of a Jewish symbol on a newborn-sized gold ring, dating to the Herodian period. The “baby’s ring,” paired with this biblical account, surely attests to a practice of gifting newborns (of rich or royal descent) precious jewelry. Other ancient infant and child rings have been discovered throughout antiquity (including with Jewish motifs), often made of poorer-quality metal such as bronze. But this exceptionally small ring, made of gold, and including this famous Jewish symbol, is an especially fine example.

This “final discovery” released to the public from Dr. Mazar—really, from both Eilat, “queen of Jerusalem archaeology,” and her grandfather Benjamin, “dean of biblical archaeology”—is a tiny testament to nearly a century of archaeology work, uncovering the rich history of the Holy Land.