The Tower of Babel: Just a Bible Story?

Is this classic account limited only to Genesis?
By Christopher Eames • July 8, 2017 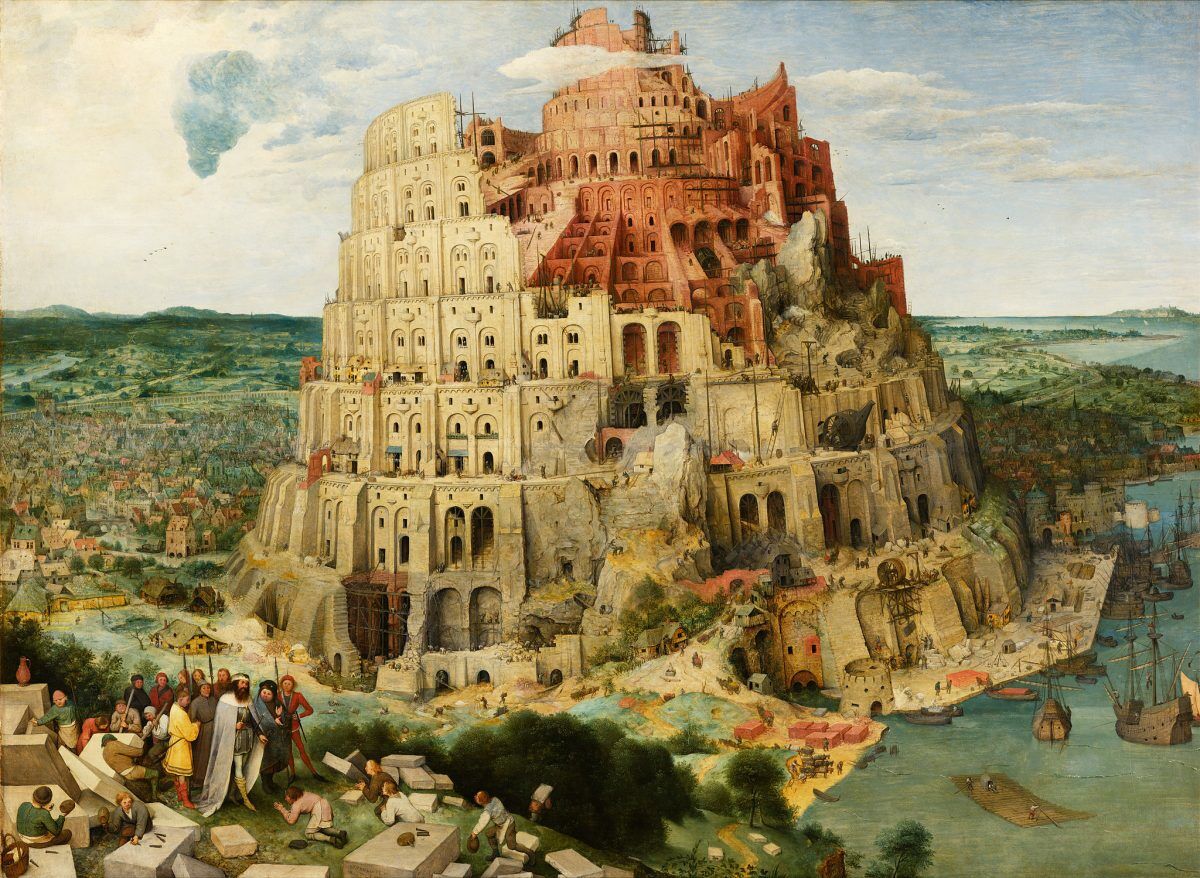 The Tower of Babel by Pieter Bruegel the Elder
Public Domain

The story of the tower of Babel and subsequent confusion of the languages is a well-known biblical account. Jewish and Christian children grow up familiar with the story. Some believe it to be historically accurate; others believe it to be myth—just an odd biblical story invented long after the fact by a small civilization on the edge of the Mediterranean.

Our site also has an article on the great Flood. A literal reading of the biblical account means that all humanity now in existence came from those eight people within the ark who survived the Flood. If this is true, then traditions of a great flood ought to be found among populations all over the world. This is indeed the case—ancient tracts dating back as much as 4,000 years record the Flood, as well as various stories and traditions preserved from the Middle East to China, Africa to the Pacific, Scandinavia to the Americas.

Yet what about the story of the tower of Babel and confusion of the languages? This occurred not many generations after the Flood. According to Genesis 11, it was only after building the tower Babel, after the languages of the peoples were confused, that mankind really began to disperse and spread out over the Earth. If that is the case, then along with a flood story we also ought to find similar traditions to a tower of Babel or confusion of language across the globe.

In fact, various ancient references to this story have been found all over the world!

Let’s first look at the Genesis account. After the Flood, which dates to sometime during the 2300s b.c.e., Noah’s family began to expand from the mountains of Anatolia down into Mesopotamia. One notable figure appears—Noah’s great-grandson, Nimrod.

Babel (or Babylon) was the genesis of Nimrod’s empire. This major biblical city has been identified in the native Akkadian language as Babili. Genesis 11 continues to describe the construction works that occurred at the central city of the despotic Nimrod:

And the whole earth was of one language, and of one speech. … And they said: ‘Come, let us build us a city, and a tower, with its top in heaven, and let us make us a name; lest we be scattered abroad upon the face of the whole earth.’ (verses 1, 4)

The ancient Jewish historian Josephus wrote about the efforts of Babel’s founder, Nimrod, in Antiquities of the Jews:

Now it was Nimrod who excited them to such an affront and contempt of God. … He also said he would be revenged on God, if he should have a mind to drown the world again; for that he would build a tower too high for the waters to be able to reach! and that he would avenge himself on God for destroying their forefathers!

And the Lord said: ‘Behold, they are one people, and they have all one language; and this is what they begin to do; and now nothing will be withholden from them, which they purpose to do. Come, let us go down, and there confound their language, that they may not understand one another’s speech.’ So the Lord scattered them abroad from thence upon the face of all the earth; and they left off to build the city. Therefore was the name of it called Babel; because the LORD did there confound the language of all the earth …. (verses 6-9)

If the Bible is to be taken literally, this must be the central dispersion point of mankind—when the human population was scattered across “all the earth”—where God confused the “language of all the earth.” So are there any contemporary stories of this account?

Enmerkar and the Lord of Aratta

There is an ancient “epic” that has been discovered from Sumer, dating to around 2100 b.c.e.—not long after the original Flood happened. The inscription, called Enmerkar and the Lord of Aratta, discusses the building of a tower. Partway into the long inscription, we find the following paragraph:

Here we read, in the context of attempting to build a tower, an incantation to try to cause people to all speak the same language. We see that the “lord of abundance,” Enki, had “placed” many languages among the nations—and this incantation was intended so mankind could work together with one language. There are other translations of the text, which render it of even closer resemblance to the biblical dispersion of languages. Here is one alternative translation of the same passage:

Once … the whole universe, the people in unison, spoke to Enlil in one tongue. … Then Enki, the lord of abundance … changed the speech in their mouths, brought contention into it, into the speech of man that had been one.

Whatever the correct original meaning, the connection with the confusion of languages in Genesis 11 is evident. The ruler in this text, Enmerkar, desired the unity of language in order to accomplish his goals. Historian David Rohl has put forward that Enmerkar is one and the same as Nimrod. The “kar” in Enmerkar’s name means “hunter”—thus a possible connection with “Nimrod the mighty hunter.” Perhaps the preceding consonants, NMR, are also a link with Nimrod’s name.

The tower of Babel is believed to have been in the form of a ziggurat, a massive ancient religious structure found throughout Mesopotamia. Ziggurats have been found dating to very early periods such as this text. Rohl believes the remains of a massive ziggurat at Eridu are the remains of the tower of Babel (there are other theories for this). Wherever the true site is, a building in the shape of a ziggurat would fit descriptions from those such as Josephus, who commented on the tower’s mountainous width rather than sheer vertical height.

This document, now within the archives of the British Museum, probably dates to the eighth to seventh centuries b.c.e. The damaged inscription describes the wrath of a god on a building in ancient Babylon:

… he the father of all the gods had repudiated; the thought of his heart was evil. … of Babylon he hastens to the submission, small and great he confounded on the mound. Their walls all the day he founded; for their destruction in the night … he did not leave a remainder. In his anger also his secret counsel he pours out; to confound [their] speeches he set his face. He gave the command, he made strange their counsel ….

The word for “confound” used here is the equivalent word used in Genesis 11, balel, meaning to confuse. The parallels between these texts are obvious.

So far, we have remained within the geography of the Middle East in our examination of Genesis 11 parallels. What about beyond? After all, Genesis 11 said the inhabitants from the city of Babel were dispersed across all the Earth.

Stories very similar to that of Genesis 11 have been found in the Americas. There is an Aztec tradition of the giant Xelhua, saved from a flood, who began building a great pyramid to reach the clouds. The project was destroyed by the gods, and the builders suddenly began speaking in different languages, resulting in utter confusion.

Another story, sourced from the ancient Toltecs by the 16th–17th century c.e. historian Ixtilxochitl, states that after mankind multiplied following a great flood, a tower was built to protect them in the event of another deluge. The languages of the builders, however, were confounded and the people dispersed. As an interesting aside, many of the ancient Mesoamerican pyramids bear similar resemblance with the ziggurats of the Middle East.

There is also a Hindu tradition of a tall, proud tree that intended to reach heaven, gathering all mankind together under its shadow to prevent them from spreading out (compare with Genesis 11:4). Brahma, however, cuts apart the tree, and from its dispersed branches different languages arise.

A Polynesian legend tells of Rata and his three sons surviving a great flood. After the flood, they attempt to build a tower to see the creator-god Vatea. The god, however, chased the builders away, destroyed the tower, and caused them to speak in various tongues.

There is also a legend from the Gaikho tribe in Burma (Myanmar), which says:

In the days of Pan-dan-man, the people determined to build a pagoda that should reach up to heaven. … When the pagoda was halfway up to heaven, God came down and confounded the language of the people, so that they could not understand each other. Then the people scattered, and Than-mau-rai, the father of the Gaikho tribe, came west, with eight chiefs, and settled in the valley of the Sitang.

There would not be room in this article to go through all the traditions. Variations on the idea of a tower of Babel and/or confusion of languages can be found in such far-flung places as Korea, Mexico, Kenya, Estonia, Guatemala, Greece and Alaska, to name a few. These cultures join with those ancient Middle Eastern traditions held by the Sumerians, Assyrians, Chaldeans, Syro-Phoenicians and Hebrews.

Thus we see evidence of a widespread, common idea. A common idea points to a common experience. Many scoff at the biblical story of a tower of Babel and subsequent division of the languages, yet its general account is found preserved, in some form or another, across the globe. What must have happened to trigger the recording of such stories? Perhaps a great tower really was built, way back in our shared history. Maybe our forefathers really were dispersed abroad, according to our new languages. Perhaps this historical and cultural mark was left on all mankind—not just the Israelites, who preserved record of it in the Bible.