Does archaeology have anything to say about this peculiar story?
By Christopher Eames • December 16, 2018 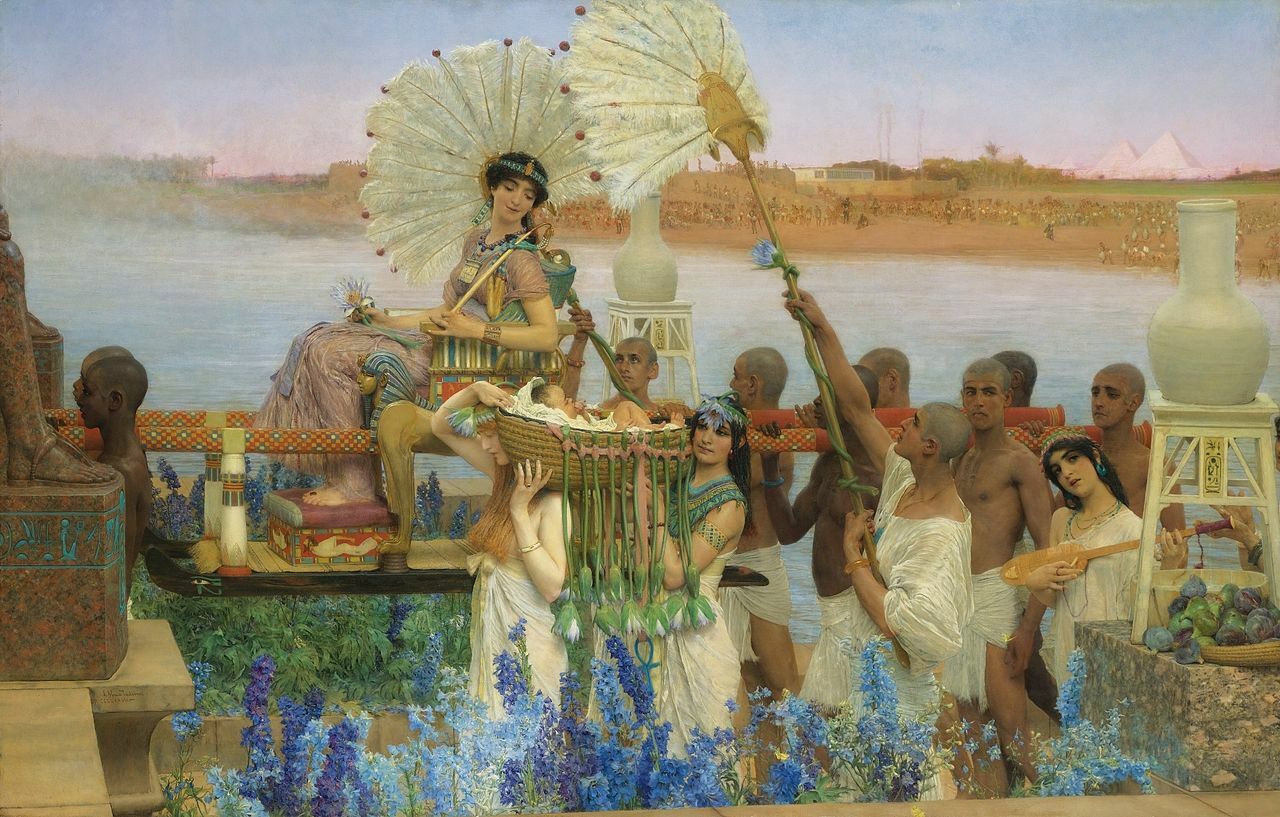 The biblical account of Moses’s birth and adoption is well known. His mother hid him immediately after his birth in order to protect him from the Pharaoh’s command to kill all male Israelite babies. After three months, she was forced to take drastic action to protect her growing newborn. Exodus 2:3 states:

And when she could not longer hide him, she took for him an ark of bulrushes, and daubed it with slime and with pitch, and put the child therein; and she laid it in the flags by the river’s brink.

Thus the baby was set adrift down the river, followed from the shore by his sister to see what would happen. The ark was noticed by a daughter of the Pharaoh, as she came down to the river with her maidens to wash. Upon opening the basket, the princess noticed that the baby was a child of the Hebrews. Unwittingly, and in a miraculous turn of events, the child’s mother was brought in as a paid wet nurse for the baby, and the Pharaoh’s daughter adopted him as her own, calling him “Moses: and she said, Because I drew him out of the water” (verse 10). Thus began the first 40 years of Moses’s life, as a “prince of Egypt.”

A remarkable story—unfortunately, with no way of corroborating it scientifically. It’s not as if we could find Moses’s preserved papyrus ark.

Actually, that’s not entirely true. Secular history and archaeology do in fact have some quite interesting things to say about this biblical episode. (And by the way, numerous papyrus baskets dating to this period do exist and provide a speculative glimpse of the type of vessel that Moses was placed inside.)

Traditional dating puts this event as having happened c. 1525 b.c.e. In the millennium following this date, we find a number of interesting texts describing a similar event along a common thread, but attributed to other famous personages.

One is attributed to Sargon of Akkad. A seventh-century b.c.e. inscription imagines, in the first person, the following account of this ancient Assyrian king’s genesis:

There’s also the Mahābhārata, an Indian Sanskrit epic known as “the longest poem ever written.” Discovered portions of the text date to c. 400 b.c.e., but the original text is believed to date several centuries earlier. The text describes the babyhood of the eventual hero Karna as follows:

Then my nurse and I made a large basket of rushes, placed a lid thereon, and lined it with wax; into this basket I placed the boy and carried him down to the river Acva … passing along the bank of the river, the charioteer, the noble friend of Dhrtarastra, and with him was Radha, his beautiful and pious spouse. She was wrapt in deep sorrow, because no son had been given to her. On the river she saw the basket, which the waves carried close to her on the shore; she showed it to Azirath, who went and drew it forth ….

Radha and Dhrtarastra proceed to adopt the boy and raise him.

The theme is found in the Greek histories; again, dating within the first millennium b.c.e. There’s one version of the story of Œdipus, who as a baby is left in a box at sea before being discovered by the wife of King Polybus as she is washing on the shore. The baby is retrieved and brought up in the royal court. There’s the story of Apollo and Kreusa’s baby boy, who is left in a woven basket. Hermes takes the boy to Delphi, and he is raised by a priestess. Even the Romulus and Remus story: The baby boys were abandoned in a basket on a river before being discovered and nursed by a she-wolf. Further accounts can be found in Otto Rank’s book The Myth of the Birth of the Hero.

The similarities between these later-sourced ancient texts (primarily the first two or three) and the Moses story are remarkable. And they pose the obvious question: Where did they originate? What was the source? Could such an event have actually occurred to an infamous individual, and become renowned, to effect such a persistent theme?

But there are more archaeological “tidbits” associated with this earliest history of the great prophet.

It’s All in a Name

The name “Moses” (or Moše, in Hebrew) was given to the boy by the Egyptian princess, “because I drew him out of the water.” This name is pure gold, from a historical-linguistic point of view. It is a word of Egyptian origin, and was a very common royal name-element dating specifically to this period attributed to Moses (16th to 15th centuries b.c.e.).

The names Moses, Mosis, Moshe, Mose are interchangeable. The term means to be “born” or “drawn” (in Moses’s case, born of water). And so Moses’s Egyptian name fits right alongside Egyptian royalty of precisely the same period, like Tuthmose (or Tuthmosis, “born of Tuth”) i, ii and iii; Ahmose; Amenmose; Ramose; Kamose; Wadjmose (etc, etc). More on the potential significance of these names further down.

Here’s a point. How was the Pharaoh’s daughter so certain, upon seeing the baby, that this was “one of the Hebrew’s children”? There’s a chance she would have been aware of the Pharaoh’s command to kill all male Hebrew offspring. So seeing a male baby hidden away in a papyrus ark would only require putting two and two together. However, Egypt was a “melting pot” society—the baby could have belonged to anyone looking to “get rid” of a baby without actively killing it. Instead, the evidence points to the baby being circumcised.

Obviously, while the Hebrews were slaves in Egypt, they had lost much knowledge of God and His commandments. However, it seems at least with Moses’s Levite parents, they had some understanding and fear of God (hence the child they were able to raise, before handing him over)—a later scripture specifically mentions their “faith.”

A common perception is that the Torah (the first five books of the Bible) was an elaborate myth written up to 1,000 years after the “eyewitness” events it purports to describe. Actually, we find that events described remarkably fit the historical settings attributed to them.

Egyptians are known to have practiced circumcision (at least certain of them). However, Egyptian wall art and text depict and describe grown men being circumcised. The Israelites were unique in that they circumcised precisely on the eighth day after birth (Genesis 17). Thus, strong evidence for Pharaoh’s daughter to conclude unequivocally that this three-month-old child was one of the Hebrews.

Just Who Was the Pharaoh’s Daughter?

Can we know who this elusive woman was? Theories have abounded. There is one strong possibility I believe fits the mold, which will be briefly discussed here.

Our article “Uncovering the Bible’s Buried Civilizations: The Egyptians” makes a case for Pharaoh Amenhotep ii as the Pharaoh of the Exodus. Amenhotep’s great-aunt was a prolific Egyptian princess called Hatshepsut.

This princess was daughter of a pharaoh and wife of a pharaoh—however, she only produced a single female heir, and apparently could not have any more children (this may explain her desire to adopt a son). Her husband and half-brother, later to become Pharaoh Tuthmose ii, produced a male heir through another wife. This heir, Tuthmose iii, began to reign at the age of 2, though due to his age Hatshepsut took control as co-regent and she made herself a fully-fledged pharaoh over Egypt (and one of the most successful, at that).

Strangely (probably during Amenhotep ii’s later reign), statues and engravings of Hatshepsut were extensively defaced, toppled and chiseled out. Could this have been because she was the same princess that rescued and raised Moses—a princess whose historical record now was egregiously vandalized, because of her connections with the man who would lead the Exodus? Together with the vandalization, Amenhotep ii maliciously denigrated Semites, and warned about magicians. Was this in connection with the plagues and the Exodus?

So what of all of it? A common perception is that the Torah (the first five books of the Bible) was an elaborate myth written up to 1,000 years after the “eyewitness” events it purports to describe. Actually, we find that the events described remarkably fit the historical settings attributed to them. And the general story of a “baby in an ark” is well attested in later histories—this signaling a common and well-known source event that really did happen. Even the name of one of the Hebrew midwives—Shiphrah (Exodus 1:15)—has been found on an Egyptian slave list, dating to the early period of Israelite slavery.

The suggestion of Israel’s presence in Egypt, or of an Exodus, is typically dismissed as lacking any archaeological or historical evidence. But this position ignores a vast amount of evidence that does point to such events in ancient Egypt. Our article “Uncovering the Bible’s Buried Civilizations: The Egyptians” more closely examines this subject.

The amount of archaeological corroboration for the entire Torah is astounding. Take a look at our article “The Antiquity of the Scriptures: The Torah” to see for yourself how the evidence strongly supports these books of the Bible as having been written just as described: by the hand of Moses, c. 1400 b.c.e. And for a wider look at evidence for the authority of the Scriptures—not just history, but especially the reliability of prophecy, past and future (of whom Moses was a major proponent)—read our free booklet The Proof of the Bible.