A lesson in being patient in waiting for confirmation of biblical events
By Warren Reinsch • August 27, 2018 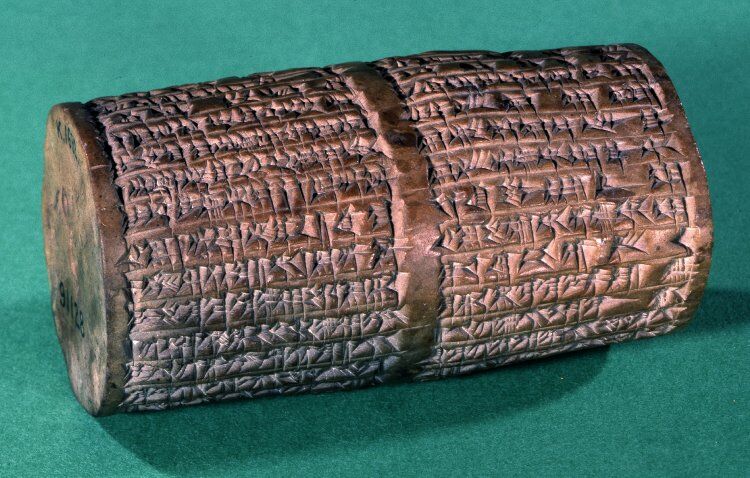 Nabonidus’s clay cylinder mentions Belshazzar.
Courtesy of the Trustees of the British Museum

In 1854, British Consul John Taylor helped prove the existence of a man in the Bible through the discovery of the Nabonidus Cylinder. Prior to this discovery, this man was thought to have been a fictional character, but Taylor’s discovery added weight and credibility to his name. This man is Belshazzar.

Belshazzar is first mentioned in Daniel 5. While attending a luxurious banquet in Babylon, he saw a hand appear out of thin air. It wrote on the wall: “Mene, mene, tekel, upharsin.” Belshazzar asked his astrologers, soothsayers and magicians for the meaning of this writing, but none were able to decipher it. Then the queen came to Belshazzar and mentioned a man named Daniel who had famously interpreted a dream for King Nebuchadnezzar. Belshazzar quickly called for Daniel’s interpretation. (For more on Daniel’s interpretation and the destruction of the city of Babylon that followed, please read “The Startling Truth About One of History’s Greatest Kings” by Brad Macdonald.)

As a reward for Daniel’s interpretation, Belshazzar commanded, and “they clothed Daniel with scarlet, and put a chain of gold about his neck, and made a proclamation concerning him, that he should be the third ruler in the kingdom” (Daniel 5:29; King James Version). Why was Daniel made third in the kingdom? Why not second? Because third was the highest position Belshazzar could give. Belshazzar was actually second in the kingdom, under his father, Nabonidus.

As the cylinder states, Nabonidus traveled to repair three temples in the land of Sin in Arabia. This explains why Belshazzar is mentioned in the biblical account instead of his father. When Nabonidus left for Arabia, he left his eldest son to act as regent of Babylon. Nabonidus had this inscribed on the cylinder:

[Nabonidus] entrusted the army to his oldest son, his firstborn, the troops in the country he ordered under his command. He let everything go, entrusted the kingship to him, and, himself, he started out for a long journey. The military forces of Akkad marching with him, he turned to Temâ deep in the west.

Who was Nabonidus’s eldest son, to whom he gave all this power? Further down on the cylinder is inscribed:

As for me, Nabonidus, king of Babylon, save me from sinning against your great godhead and grant me as a present a lifelong of days, and as for Belshazzar, the eldest son—my offspring—instill reverence for your great godhead in his heart and may he not commit any cultic mistake, may he be sated with a life of plenitude.

Nabonidus filled in all the gaps. On this cylinder, he had etched the details proving both the existence of Belshazzar and the associated biblical narrative. According to this cylinder, Belshazzar was the son whom Nabonidus made regent of Babylon.

This cylinder records that Nabonidus traveled around Arabia repairing temples. It also confirms the identity of Belshazzar and informs us about the role he played in Babylon while his father was absent. In doing so, it adds more credibility to the Bible as a whole. More and more portions of the Bible are being proved, one after another. Discoveries like this one provide extra details about the biblical narrative and help us to better understand the past.