The contents of a wooden box reveal a dramatic snapshot of the Maccabean Revolt.
By George Haddad • December 19, 2022 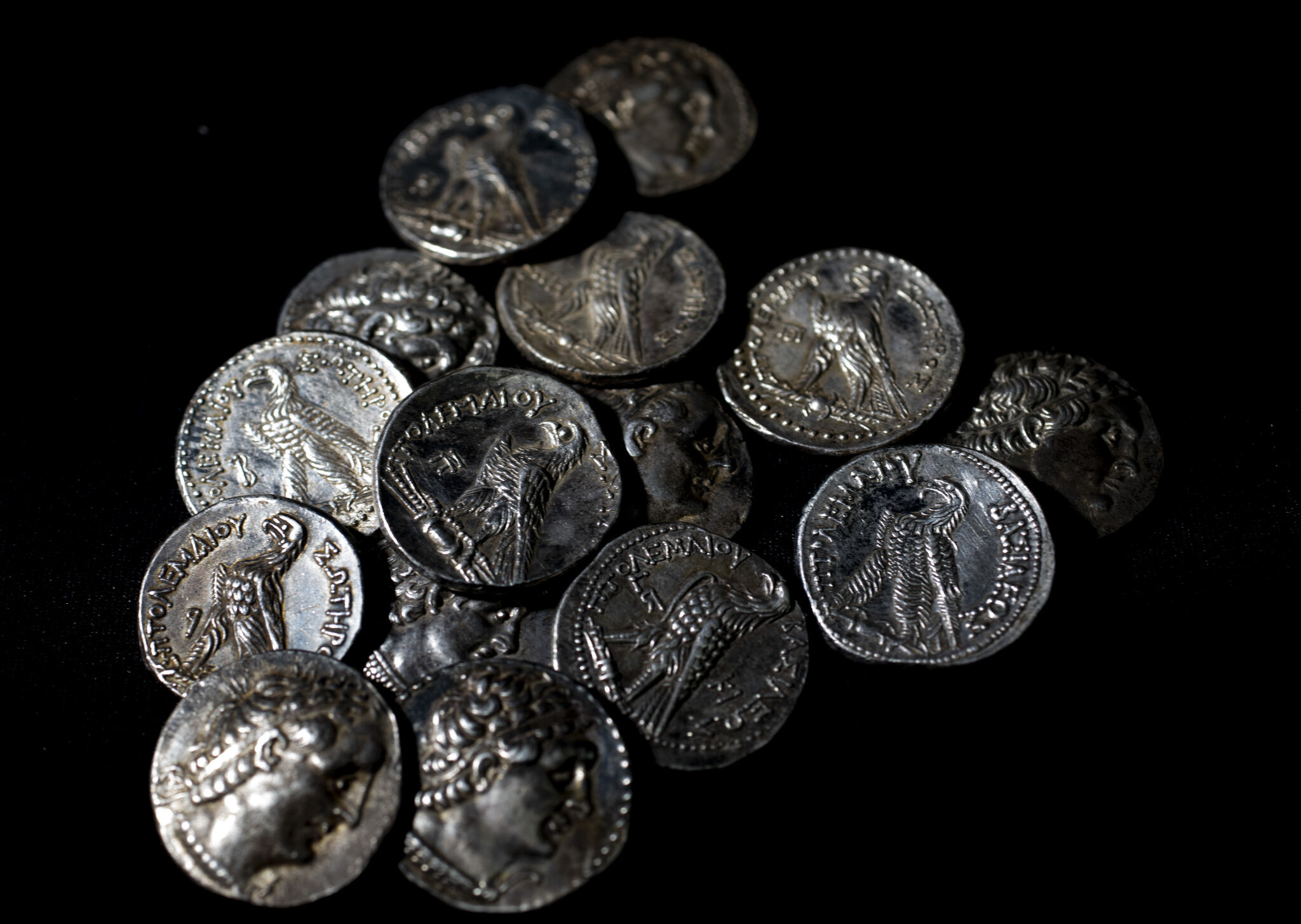 An unusual wooden vessel containing 15 silver coins was discovered in May during a rescue excavation in the Muraba’at Cave, located in the Judean Desert near the Dead Sea. The coins are dated to the Maccabean period based on the latest minting in the hoard, which dates to 170 b.c.e.

The coin hoard had been carefully stowed inside the wooden box, protected by packed earth and a large piece of purple wool. Archaeologists speculate that it was hidden in the cave by someone who fled and intended on returning to the cache, but was likely killed. The potential life savings of the individual lay hidden until excavations almost 2,200 years later uncovered them. One of the coins has the name “Shalmai” hand-inscribed in Aramaic—was this the hoard’s owner?

The 15 tetradrachm coins (ancient, silver Greek coins worth four drachmas) were minted by Ptolemy vi, king of Egypt. This was at the same time that his uncle Antiochus iv Epiphanes ruled the Seleucid Empire, including Judea.

Antiochus iv Epiphanes (“the Wicked”) commanded a brutal and tyrannical rule over the Jews. He attempted to completely blot out Jewish culture by outlawing religion, instituting pagan worship in the temple, banning circumcision and mandating non-kosher sacrifices. This was the framework leading up to the Maccabean rebellion beginning in 167 b.c.e. You can learn more about this period here.

Dr. Eitan Klein, who studied the coins, commented: “This is an absolutely unique find, presenting the first clear archaeological evidence that the Judean Desert caves played an active role as the stage of the activities of the Jewish rebels or the fugitives in the early days of the Maccabean Revolt.”

The book of Maccabees describes this dramatic time period:

“Then many who were seeking righteousness and justice went down to the wilderness to dwell there, they, their sons, their wives, and their cattle, because evils pressed heavily upon them. And it was reported to the king’s officers, and to the troops in Jerusalem the city of David, that men who had rejected the king’s command had gone down to the hiding places in the wilderness. Many pursued them, and overtook them; they encamped opposite them and prepared for battle against them on the sabbath day. … [A]nd they died, with their wives and children and cattle, to the number of a thousand persons” (1 Maccabees 2:29-32, 38; Revised Standard Version)

Amir Ganor, director of the excavation on behalf of the Israel Antiquities Authority, stated: “The Survey and Excavation Project carried out by the Israel Antiquities Authority in the Judean Desert over the past six years has proved itself, in that thousands of archaeological artifacts have been saved from destruction and plundering, including parts of biblical scrolls, arrowheads from the Bar Kochba Revolt, a 10,500-year-old basket, and more.”

Hanukkah, in part, is a celebration of the successful Maccabean Revolt against the Seleucid Empire, and this discovery will be displayed for the public during Israel’s Heritage Week in the Hasmonean Museum in Modi’in.