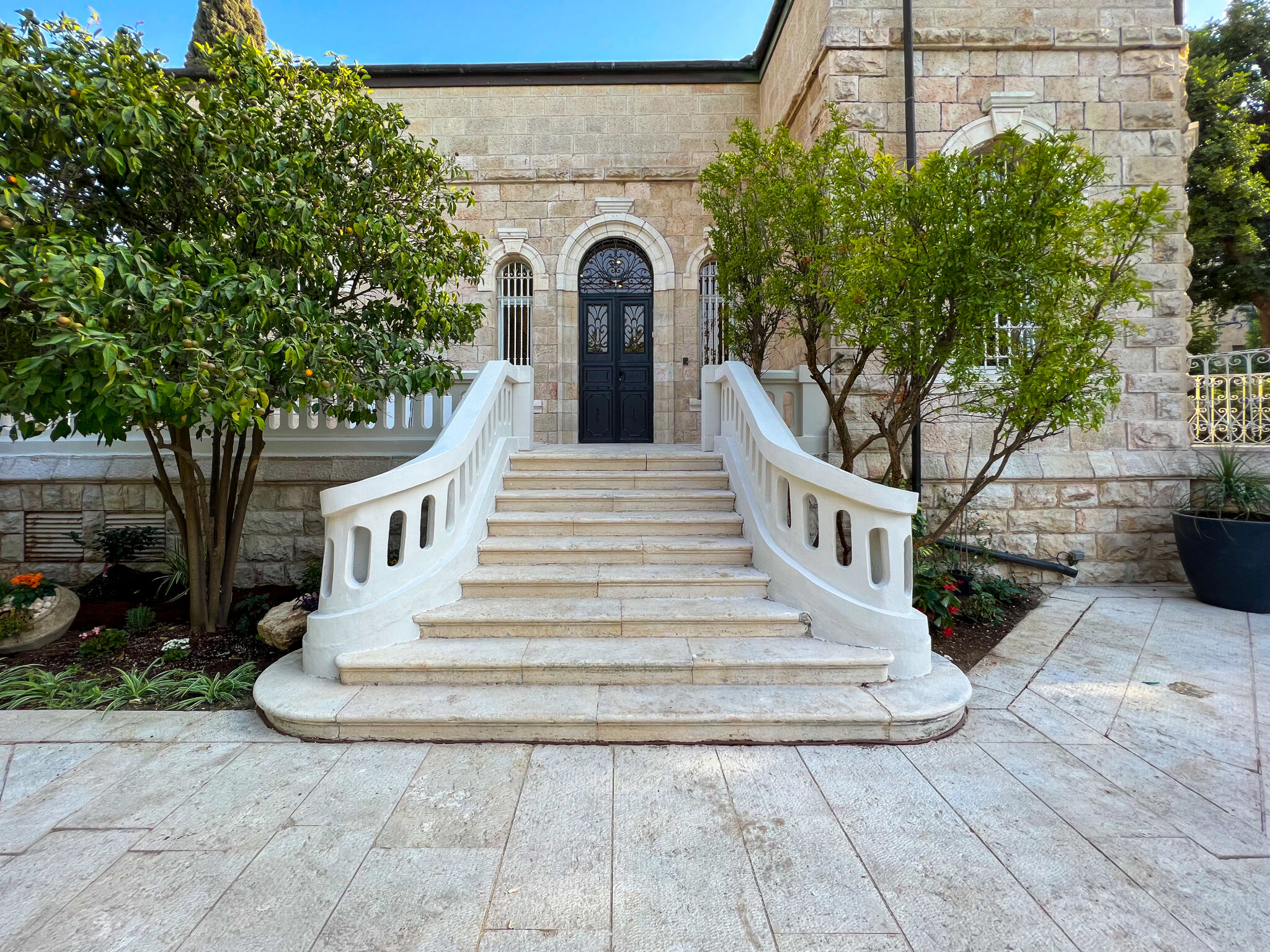 Our new institute building in Jerusalem opened on September 4.

The Armstrong Institute of Biblical Archaeology officially opened on September 4, 2022. The grand opening was held at the brand-new home of the Armstrong Institute in Talbiyeh, Jerusalem. Over eighty guests attended the ceremony. Among them were Israel Prize winner and archaeologist Amihai Mazar, Prof. Uzi Leibner (head of Hebrew University’s Institute of Archaeology), and Prof. Yosef Garfinkel. Dr. Eilat Mazar’s sister and children were also invited to the celebration.

Two speeches were given at the event. Prof. Uzi Leibner spoke first, sharing a brief preliminary review of his recent summer 2022 Ophel excavation. The project, conducted in cooperation with the Armstrong Institute of Biblical Archaeology, sought to unearth a Herodian monumental structure and adjacent ritual bath. According to Leibner, the Temple Mount’s ancient entrance was likely on its southern side—close to the monumental structure. If this is true, the monumental structure likely stood in a highly trafficked area, which means it has great archaeological significance.

Prof. Leibner explained several intriguing finds from the 2022 season. Foremost among them was a beautifully preserved stone staircase predating the 70 c.e. destruction of Jerusalem. Leibner remarked on its high-quality stone masonry, and speculated that the staircase may have been part of a first-century ritual bath. Other finds included dozens of Jewish revolt coins and an ornately carved Byzantine bone plaque depicting the Greek god Dionysus.

Of special interest was the sprawling network of subterranean passageways beneath the monumental structure. Prof. Leibner explained that these passageways were probably used as a drainage system for the structure above. Interestingly, however, part of the drainage system seems to predate the structure. The dating of the tunnels is still unclear. Prof. Leibner hopes future excavations will answer remaining questions.

Prof. Leibner reached a few overall conclusions about the monumental structure. “Its monumental architecture and large entranceways clearly indicate it was a public building,” he said. “We may speculate it was a complex devoted to ritual purity.” The date of its construction is still unknown. However, it was undoubtedly destroyed in 70 c.e. along with the temple and the rest of Jerusalem. After this, Byzantine villagers occupied the site in the fifth to sixth centuries c.e. Prof. Leibner’s crew found Byzantine remains in both the monumental structure and its subterranean passageways.

“Managing an excavation is comparable to orchestral conducting,” said Prof. Leibner. “The intensive collaboration between staff members, volunteers, state authorities, contractors, conservers, etc. makes this mission complicated, exhausting …. I was fortunate to have wonderful team members and volunteers who made this into a fascinating and enjoyable season, each contributing his or her part to bring this collaborative mission to completion. I wish to thank them all, and am looking forward to the future seasons at the Ophel. Thank you.”

After Prof. Leibner concluded, the keynote speech was given by the chancellor of Herbert W. Armstrong College and founder of the Armstrong Institute of Biblical Archaeology, Mr. Gerald Flurry. He spoke about the relationship between Herbert W. Armstrong and 20th-century Israeli leaders. Herbert Armstrong (1892–1986) was a great educator and humanitarian who met with over thirty world leaders. He became known as an “unofficial ambassador for world peace.” As Mr. Flurry explained, Armstrong had a close relationship with several Israeli leaders, including Golda Meir, Yitzhak Rabin, Menachem Begin and Teddy Kollek. He was also a good friend of Prof. Benjamin Mazar, grandfather to Eilat Mazar.

Herbert Armstrong loved Jerusalem—so much that he once visited the city 50 times in the space of four years. The Israeli leaders he associated with also loved Jerusalem, “And that’s why I think they had an unusual harmony,” said Mr. Flurry. “They shared a certain faith that I think can be very helpful, especially in an age like this,” he continued.

After this, Mr. Flurry expounded on the shared faith of Herbert Armstrong and Israeli leaders. “Mr. Armstrong and these men were thinking beyond just biblical archaeology,” he said. “They were believing certain prophecies …. Mr. Armstrong had a certain faithfulness, but they did too.”

Particularly insightful was a quote from Benjamin Mazar, who sought to publicize Mr. Armstrong’s private conversations with Israeli leaders: “Mr. Armstrong loves and admires Jerusalem, and whole-heartedly believes in the future of Israel and the Holy City, and for him, the unified Jerusalem is not only the metropolis of Israel and the spiritual center of monotheistic religions, but also the symbol of a great past and the hope of a better future for mankind.”

“Regardless of our archaeology views,” concluded Mr. Flurry, “I believe these leaders can teach us some lessons.”