A dramatic numismatic snapshot of Byzantine history (including a veritable “time lapse” of the maturation of the empire’s princes!)
By George Haddad • October 6 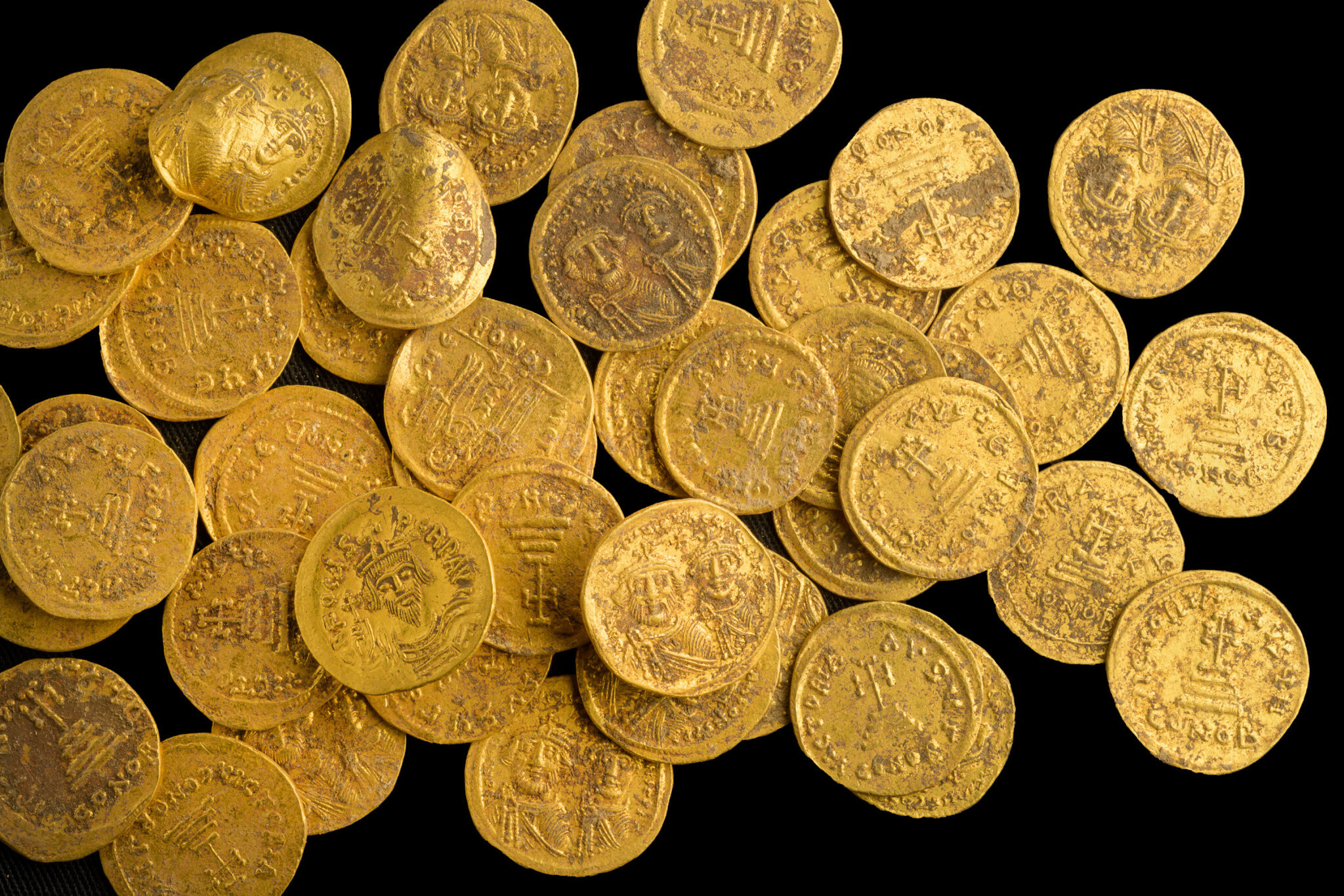 A hoard of 44 pure gold coins was discovered inside a wall within the Hermon River National Park, according to a press release issued earlier this week. The excavations were headed by the Israel Antiquities Authority and funded by the Israel Electric Corporation.

According to Dr. Yoav Lerer, director of the excavation on behalf of the the Israel Antiquities Authority:

The coin hoard, weighing about 170 g, was concealed within the base of an ashlar stone wall at the time of the Muslim conquest. The discovery reflects a specific moment in time, when we can imagine the owner concealing his fortune in the threat of war, hoping to return one day to retrieve his property. In retrospect, we know that he was less fortunate.

The specific area of the excavation was in a residential quarter of the ancient city Banias (or “Paneas,” a site along Israel’s northernmost border), where buildings, water channels, a pottery kiln, bronze coins, and fragments of pottery, glass and metal artifacts all dating to the end of the Byzantine period were found. Dr. Lerer adds, “The discovery of the coin hoard may also shed light on the economy of the city of Banias during the last 40 years of Byzantine rule.”

The solid gold coins were mainly minted by Emperor Heraclitus (610–641 c.e.), with a few from Emperor Phocas (602–610 c.e.). This find is a great snapshot of the transition period right before the Muslim conquest.

What is printed on the coins is especially of interest, as it shows the passage of time in a unique way. “Most of the coins are of the Byzantine Emperor Heraclius,” says Dr. Gabriela Bijovsky, Israel Antiquities Authority numismatics expert. She continues:

What is particularly interesting is that in his early years as emperor, only his portrait was depicted on the coin, whereas after a short time, the images of his sons also appear. One can actually follow his sons growing up – from childhood until their image appears the same size as their father, who is depicted with a long beard.

Coins and their depictions are of great significance to archaeologists, serving as quite literal timestamps of history. Gold coins, of course, are always going to be an even more special find. A coin minted in history often tells a story of that particular time period, and it is especially useful for dating purposes.

Our institute uncovered a similar set of treasure in 2013, when our team—under the direction of Dr. Eilat Mazar—excavated an area on the eastern side of the Ophel, about 45 meters from the Temple Mount. A hoard of rare gold coins, along with silver and gold jewelry and a large medallion ornamented with Jewish symbols, was discovered in a Byzantine structure dating to the early seventh century c.e. (You can read more about the discovery of this coin and medallion hoard here.)

Eli Eskosido, Director of the Israel Antiquities Authority, issued the following statement about the Banias discovery:

The coin hoard is an extremely significant archaeological find as it dates to an important transitional period in the history of the city of Banias and the entire region of the Levant. The Israel Antiquities Authority, together with the National Parks Authority, will work together to exhibit the treasure to the public.