An additional detail drops in our interview with the amulet’s excavator, Dr. Stripling, as we await the final report.
By Christopher Eames • March 28 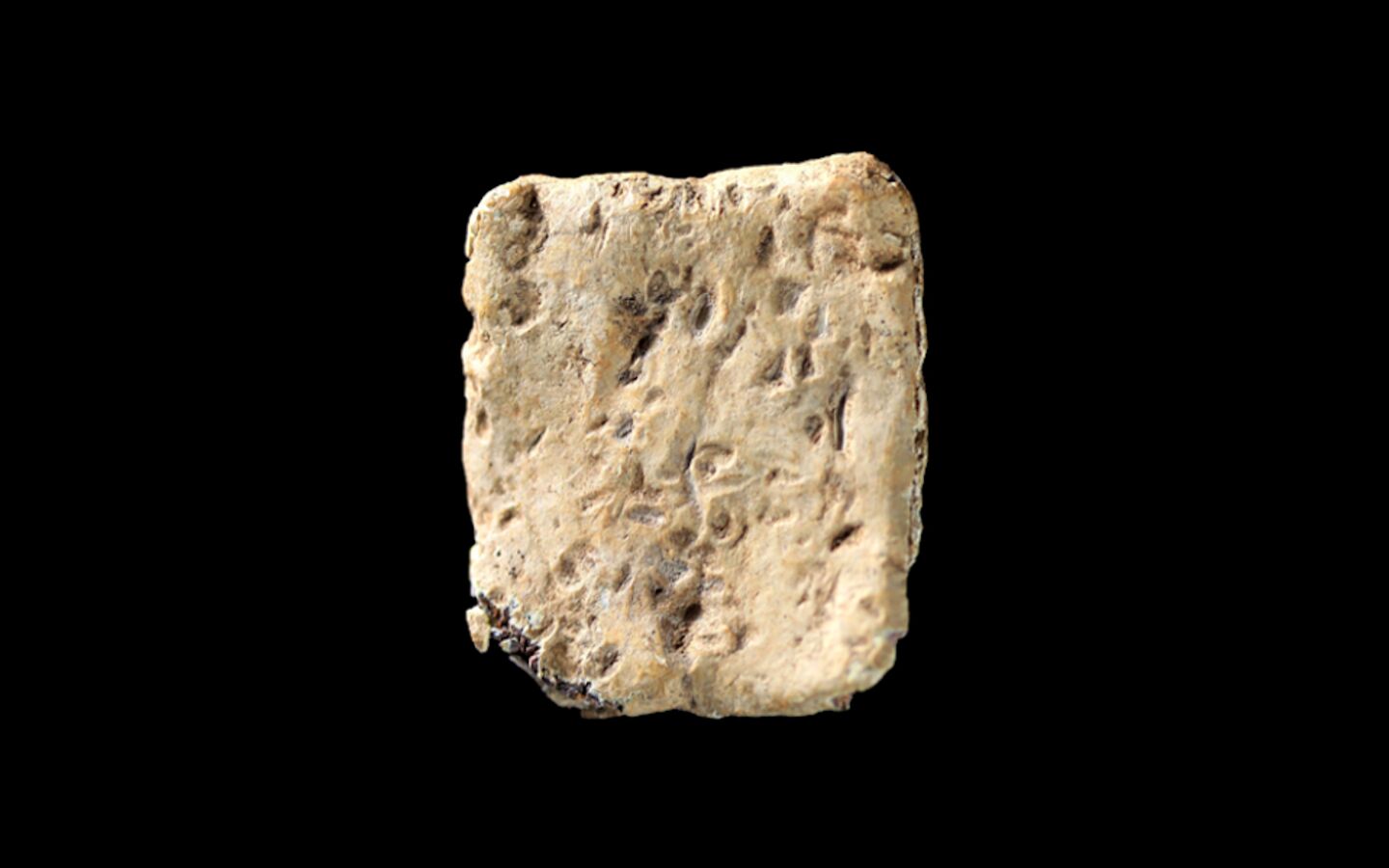 Outer face of the folded curse amulet. Faint script can barely been seen on the worn outer side.
Michael C. Luddeni | Associates for Biblical Research (ABR)

Following an electric press conference in which the discovery of a Late Bronze Age curse amulet (containing the “earliest” proto-Hebrew inscription found in Israel) was announced, an additional detail was given to aiba in an interview with the archaeologist responsible for the discovery, Dr. Scott Stripling: The inscription contains two names for the deity described.

The first line of text is translated: “Cursed, cursed, cursed—cursed by the God yhw.” As Dr. Stripling commented, this line contains a “juxtaposition of names—El [God] and yhw are side by side.”

As was announced in the press conference, based on the current translation of the inside of the curse amulet, the name yhw appears twice. This name typically appears in the Bible as yhwh and is the name for God used most often (nearly 7,000 times). As Dr. Stripling noted in the interview, the shorter yhw represents an early, “non-standardized” form. Variations can be seen within the Bible itself—such as the use of the name yh (often translated into English as “Jah”), found 50 times throughout the Bible from the book of Exodus through to Isaiah.

Variations to this name can also be seen geographically. This is shown by personal names containing this theophoric element, such as Jeremiah, Hezekiah, Jehoshaphat and Joram. Archaeological discoveries across Israel have revealed that while individuals from the southern kingdom of Judah tended to use the yh or yhw element in personal names, the form yw was more prevalent in the northern kingdom of Israel. As was noted, the presence of this name on the tablet predates any known examples by centuries.

The other name for “God,” El, is used hundreds of times in the Bible. There are other forms of this name as well, such as the longer Eloah and Elohim. This is also a commonly incorporated name element—for example, Bethel and Daniel. The use of this Hebrew name is also found in a well-known New Testament passage (Matthew 27:46).

The use of El on the curse tablet is notable, specifically for its relevance to the debate about the early authorship of the Torah. For the past several centuries, a predominant theory among scholars has been some form of the Documentary Hypothesis or “jedp Theory.” In short, this theory asserts that the Torah was a creation from the imaginations of writers living during the first millennium b.c.e. who, depending on the period they lived in and based on the deity they worshiped, used various names for God. According to the theory, there was first a Jehovist (or Yahwist) “J”-author during the early first millennium b.c.e. who wrote with one name of God, followed a century or two later by an Elohist/El “E”-writer who used a different name of God. (The other two letters, D and P, designate even later writers or redactors: Deuteronomist and Priestly.)

Bible-believers, however, recognize that these two deity names are used concurrently in the Torah and elsewhere. Rather than being a sign of different writers or even of different pagan gods worshiped in different locations, the two names simply have different implicit meanings. (Exodus 3-4, for example, explain the special meaning of the name yhwh.)

It is especially notable, then, to find the names El and yhw juxtaposed together on a late-second-millennium b.c.e. inscription. The find confirms the early concurrent use of various titles for God just as is witnessed throughout the Bible. This undermines the argument that the use of multiple names of God was the product of a “blending” by redactors of various late authors who each used different deity names.

As Stripling reaffirmed, the full academic study of the artifact will hopefully be released at the end of the summer. Reportedly, some three-to-four dozen letters have been translated from the inside of the folded lead tablet so far, and deciphering continues for the more well-worn, difficult outer portion. We eagerly await further information about this remarkable—and revolutionary—artifact!