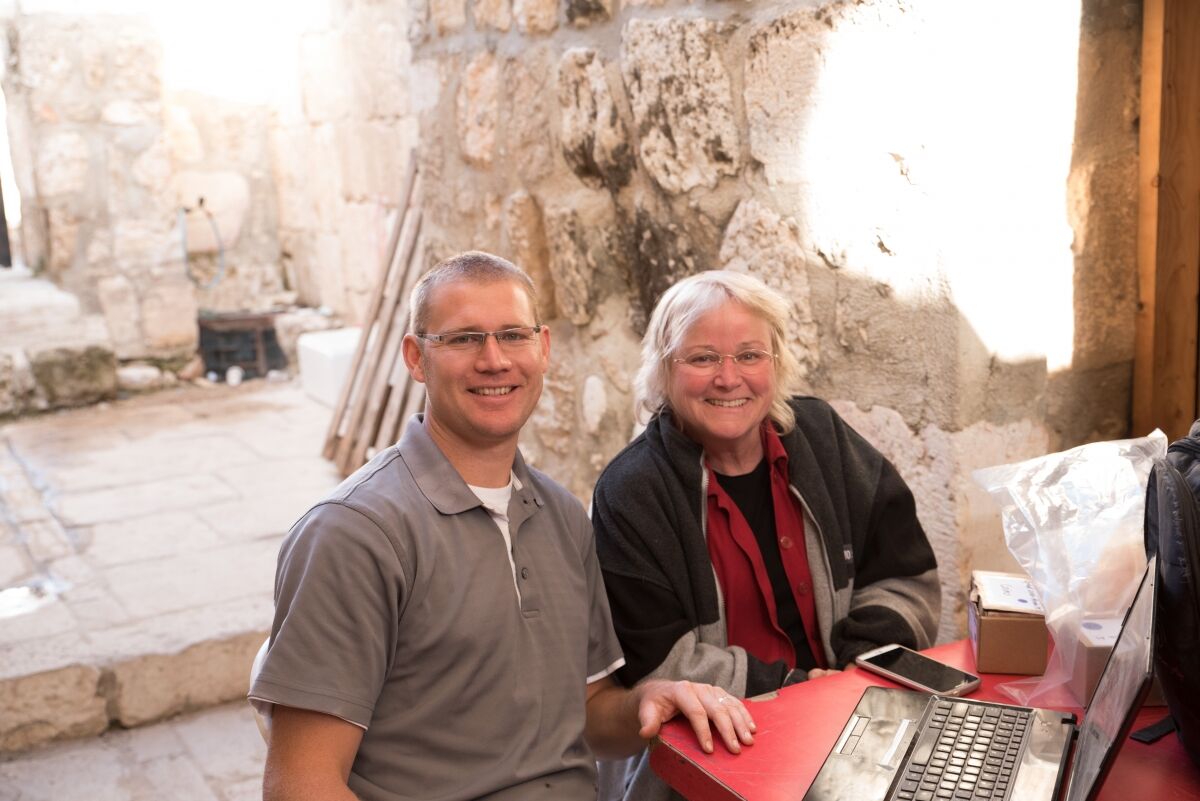 Brent Nagtegaal sits with Eilat Mazar at the Ophel Excavations in 2018.
Kassie Verbout/AIBA
From the September-October 2022 Let the Stones Speak Magazine Issue

Imagine sculpting beside Leonardo da Vinci or playing basketball on Michael Jordan’s team. For me, that is what those 15 years of working beside Dr. Mazar was like—I was part of something truly special.

I first met Dr. Mazar in October 2006. I was in Jerusalem for the first time, volunteering on her dig as a college student. She greeted me with a giant smile, introduced me to a few Hebrew words, and quickly put me to work under the guidance of another archaeologist supervisor. During the break, she sat beside me and began asking about my family and my life. I was surprised. The director of the excavation was interested in me, a grubby, uninitiated college student. She made me feel special and important. I soon realized that I wasn’t—Eilat treated every single one of her diggers like this. We were family.

It is hard to express how masterful Dr. Mazar was at her job. I remember an occasion toward the end of the 2006 excavation season when I was having difficulty discerning whether a certain layer connected with a wall. Eilat, as she insisted on being called, walked by and noticed my baffled expression. She asked if I’d like some help. I handed her my trowel and she went to work. There was purpose and thought in every stroke; the confidence with which she worked revealed experience and passion. It was as if she could see through the soil; she knew exactly what needed to stay and what could go. Within seconds, the truth began to emerge.

The dirt was flying and I quickly bucketed it up. Fifteen minutes later, Eilat had finished a job that would have taken me more than an hour. And we had an answer: The layer did not touch the wall.

Eilat taught me a lot about humility, and how important it is that science and truth triumph dogma and personal ambition. I can recall a moment during the final week of the same excavation when I looked up and saw Eilat giving a tour. I recognized Prof. Israel Finkelstein, a well-known archaeologist, but also a biblical minimalist and staunch critic of Eilat and her archaeology. Afterward, I asked Eilat why she embraced someone who disagrees with her so strongly. She mildly admonished me and told me that Jerusalem’s history did not belong to her (or me)—that it belongs to everyone. Eilat believed archaeology strengthened the soul of the nation.

Another memory I have was when I accompanied Eilat to an archaeological convention in Tel Aviv. Dr. Mazar was releasing her recent discovery of Nehemiah’s wall to a standing-room-only crowd of hundreds of people. The professor who followed Eilat used his time to discredit Dr. Mazar’s work and conclusions. Some of his claims were simply preposterous and clearly inspired by his aversion for the Bible. I was upset! Not Eilat—she was unaffected and determined to continue her work and “let the stones speak.”

A few months later, Eilat announced a reading of an inscription found in her excavations. She read it as “Temech,” a family mentioned in the Bible that went with the Jews who returned from Babylonian exile during the Persian period. In the weeks following this announcement, some epigraphers viewed the inscription online and questioned Dr. Mazar’s conclusion. They explained why they thought Eilat was wrong. Instead of digging in her heels and holding fast to her theory, Dr. Mazar studied their science and happily conceded that they were right. She told them how wonderful it was that the Internet allowed scholars around the world to work together.

Dr. Mazar was also a tremendous force for unity. There were the many times when we would leave the dig site together in her car, crawling through the congested streets of Silwan, the predominantly Arab village in which the ancient City of David is situated. Whenever we stopped, Eilat would roll down her window and chat with the locals. Initially, I thought she was merely being friendly with strangers. But then I noticed they called her Eilat and they’d chat about personal topics. Some were Arabs, some were Jews, but it didn’t matter to Eilat: She was interested in them all. It says a lot about Eilat that she worked in the most volatile neighborhood on the planet and everyone loved her.

Eilat was like a mother to me. In 2016, when I moved to Israel with my pregnant wife, Eilat was the first to help. No mattresses to sleep on? No problem; Eilat showed up at our new apartment with bedding. When our daughter arrived, Eilat was there. It was the same when my son arrived, and even when our third arrived (even though Eilat was clearly very ill). Dr. Mazar knew we didn’t have family in Israel, so she brought us into her own.

Finally, there was Eilat’s love of Jerusalem and its archaeology. I remember the last call I received from Dr. Mazar. With some difficulty, she thanked me for our support through the years, remarking that we were always a source of strength and encouragement. She then asked me about a project I was working on for her, telling me that she needed it for her upcoming book on Jerusalem. To me, this anecdote captures the life and personality of Eilat: No matter what was happening in her life—even when she was clearly suffering—Dr. Mazar’s mind was always on Jerusalem’s archaeology.

Of all the incredible opportunities and blessings I have experienced, working beside the woman responsible for the discoveries showcased in this magazine is one of the greatest. Eilat was more than just an archaeologist; she was a visionary who understood that revealing the true history of Jerusalem was critical to strengthening the soul of the nation. She dedicated her life to that cause. And though her life was cut short, her impact will live on. She didn’t waste her time in endless debates with dishonest scholars. She stated her proofs, she “let the stones speak,” and then focused on the next archaeological endeavor.

And through it all, she never overlooked those who worked alongside her—her family and friends.