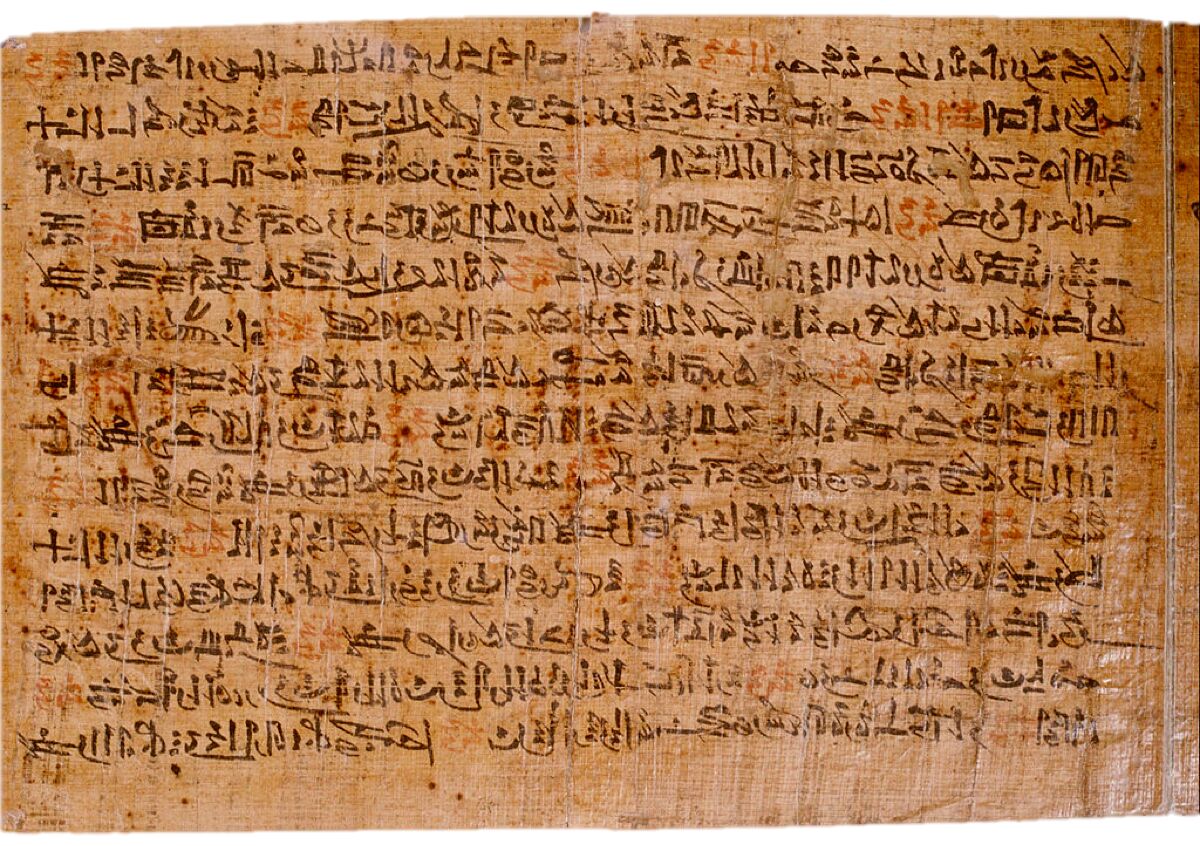 The Ipuwer Papyrus (c. 13th century BCE), on display at the Dutch National Museum of Antiquities in Leiden.
Public Domain

To many, the biblical account of the 10 plagues and the Exodus is simply too fantastical to be believed—pure legend found only within the pages of the Bible, Israelite propaganda. But what if it isn’t? What if there was an Egyptian eyewitness account of the divine punishment and suffering described in the Bible?

The Ipuwer Papyrus is a lengthy scroll written in heiratic text, dating to circa 13th century b.c.e. It is known to be a copy of an earlier work; however, when the original was written is a mystery. Dating is merely guesswork, generally ranging from the early 2000s to the 1500s b.c.e. (the latter end of the spectrum more closely aligns with the biblical date for the Exodus).

The Ipuwer Papyrus was written by a royal Egyptian scribe of the same name. He tells a lengthy story of absolute calamity befalling Egypt. Many references throughout the papyrus are strikingly similar to the biblical account of the 10 plagues—possible allusion can be found to at least six of the biblical plagues—as well as other elements of the Exodus account.

Below are key portions of the papyrus (italicized), compared with parallel biblical scriptures about the plagues that ravaged Egypt. Dispersed all throughout Ipuwer’s text, the especially relevant examples have been grouped together below, beginning with a particularly startling parallel.

Indeed, the river is blood, yet men drink of it. Men shrink from human beings and thirst after water …. (Exodus 7:20, 18: “[A]nd all the waters that were in the river were turned to blood. … [T]he Egyptians shall lothe to drink of the water ….”)

Indeed, [hearts] are violent, pestilence is throughout the land, blood is everywhere, death is not lacking …. (Exodus 9:15: “[T]hat I may smite thee and thy people with pestilence ….” Exodus 7:19: “[T]hat there may be blood throughout all the land of Egypt ….”)

Indeed, all animals, their hearts weep; cattle moan because of the state of the land …. (Exodus 9:3, 6: “Behold, the hand of the Lord is upon thy cattle which is in the field, upon the horses, upon the asses, upon the camels, upon the oxen, and upon the sheep: there shall be a very grievous murrain. … [A]nd all the cattle of Egypt died.”)

Behold, the fire has gone up on high, and its burning goes forth against the enemies of the land …. Indeed, gates, columns and walls are burnt up …. (Exodus 9:23-24: “[A]nd the fire ran along upon the ground …. So there was hail, and fire mingled with the hail, very grievous ….”)

Indeed, everywhere barley has perished …. (Exodus 9:31: “And the flax and the barley was smitten ….”)

Indeed, men are few, and he who places his brother in the ground is everywhere …. (Exodus 12:30: “[T]here was not a house where there was not one dead.”)

Indeed, laughter is perished and is [no longer] made; it is groaning that is throughout the land …. (Exodus 12:30: “[L]oud wailing was heard throughout the land of Egypt. There was not a single house where someone had not died”; New Living Translation.)

All is ruin! … Indeed, that has perished which yesterday was seen …. Ipuwer laments the utter—and sudden—destruction of the land.

As the Bible describes, for the initial plagues, the Egyptian magicians attempted to replicate the miracles. This they did to varying degrees of success, before they recognized their power as completely useless. As with the Bible, Ipuwer also mentioned the downfall of magicians. Indeed, magic spells are divulged; smw- and shnw-spells are frustrated because they are remembered by men.

Ipuwer made another interesting note: Indeed, the ship of [the southerners] has broken up; towns are destroyed and Upper Egypt has become an empty waste. The Bible states that the Israelites occupied the Land of Goshen. This was a major area within Lower Egypt, in the Nile Delta region. Egypt, during the first half of the second millennium b.c.e., was divided into two areas: Upper Egypt in the south, ruled by native Egyptians, and Lower Egypt in the north, inhabited and governed by “foreigners” originally from Canaan. At the end of this period, Upper Egypt gained power and overthrew Lower Egypt. It is interesting that Ipuwer here made specific mention of the utter destruction of Upper Egypt. God stated that the land within which the Israelites dwelled—Goshen, within Lower Egypt—would be spared. For example: “And I will sever in that day the land of Goshen, in which my people dwell, that no swarms of flies shall be there …. Only in the land of Goshen, where the children of Israel were, was there no hail” (Exodus 8:22; 9:26).

After the final, 10th plague of Egypt (the death of the firstborn), the Egyptians became desperately urgent for the Israelites to leave. They offered up all kinds of personal belongings and treasures to them, in what the Bible describes as the “spoiling” of the Egyptians.

Indeed, poor men have become owners of wealth, and he who could not make sandals for himself is now a possessor of riches …. (Exodus 12:35-36: “And the children of Israel … borrowed of the Egyptians jewels of silver, and jewels of gold, and raiment …. And they spoiled the Egyptians.”)

Indeed, gold and lapis lazuli, silver and turquoise, carnelian and amethyst, Ibhet-stone and […] are strung on the necks of maidservants …. (Exodus 11:2: “[E]very woman (borrowed) of her neighbor, jewels of silver, and jewels of gold.”)

The Bible describes this triumphant rise of the Israelites in receiving the wealth of the Egyptians. They then proceeded to depart from Egypt in jubilation, with a “high hand.” Ipuwer continued: Indeed, noblemen are in distress, while the poor man is full of joy. Every town says: “Let us suppress the powerful among us.”

The liberated Israelites would now have the freedom to worship the true God. Ipuwer wrote: [Behold, he who did not know] his god now offers to him with incense of another …. Here again is another possible allusion to the departing Israelites, now able to worship their God, who to that point was unknown to them (e.g., Exodus 3:13).

The Bible gives clear reasons for the destruction of Egypt and the Exodus. The Ipuwer Papyrus, on the other hand, is damaged at both ends, and isn’t so clear. However, some allusion of “blame” can be found within the text. What the ancestors foretold has arrived, Ipuwer wrote near the start of his scroll. Indeed, the events leading up to the Exodus had been foretold, some 500 years earlier (Genesis 15). Perhaps some form of this prophecy became known in Egypt (such as in Genesis 50:24-25).

In the latter part of his papyrus scroll, Ipuwer inserted a very interesting paragraph, hinting at a reason for the carnage:

He brings coolness upon heat; men say: “He is the herdsman of mankind, and there is no evil in his heart.” Though his herds are few, yet he spends a day to collect them, their hearts being on fire. Would that he had perceived their nature in the first generation; then he would have imposed obstacles, he would have stretched out his arm against them, he would have destroyed their herds and their heritage.

This has a familiar ring to the initial arrival of Jacob, his 12 sons and extended family to Egypt. They were welcomed in peacefully, as herdsmen, and were separated out from the other Egyptians in order to raise their livestock (Genesis 46:34—“for every shepherd is an abomination unto the Egyptians”). It’s as if Ipuwer was saying, If only our leader, who had allowed them into the country, had imposed obstacles and made it difficult for these people to so freely establish themselves—if only he had destroyed their herds and cattle! They would not have multiplied in our land, and caused such curses to come upon us.

And could the Ipuwer Papyrus even contain a reference to Moses? There is a possible related passage: Behold, Egypt is fallen to pouring of water, and he who poured water on the ground has carried off the strong man in misery. This brings to mind Moses’s return to Egypt in order to save his people. One of the pre-plague miracles God instructed him to perform was as follows (Exodus 4:9):

Ipuwer may have referred to such a miracle as the harbinger to Egypt’s destruction—Egypt is fallen to pouring of water—as well as this individual “carrying off the strong man in misery,” perhaps relating to the pharaoh himself, who died in the Red Sea.

The Ipuwer Papyrus (click here to read the full text) is an artifact of hot debate. Many believe it to be merely a fictional account, although still a literary masterpiece. Others believe it may have been somewhat based on a real tragedy. Of course it couldn’t relate to the Exodus account, because that too (according to the experts) is unfounded fiction. Anne Habermehl writes:

Indeed, some scholars practically trip over their feet in their eagerness to claim that this manuscript does not refer to real events at all, biblical or otherwise. As an example, Mark (2016) displays almost contempt for those who actually believe. According to him, “One can only accept The Admonitions of Ipuwer as history if one has little or no knowledge of Egyptian history and literature.” Lichtheim (1973, p. 150) says that “the Admonitions of Ipuwer has not only no bearing whatever on the long past First Intermediate Period, it also does not derive from any other historical situation.”

Added to this generalized dismissal, the dating for the papyrus is also assumed to be much older than the time frame for the events culminating in the Exodus.

But that’s not entirely accurate. Researchers simply don’t know the original dating for this document—it varies across a span of six centuries—and the latter end of the date spectrum may indeed align with the events of the Exodus. And as shown above, both documents complement each other so well. A river that became blood. Pestilence. Crops, livestock, buildings devastated. Fire and darkness. “Well-born” offspring dying. Lame-duck magicians. Slaves pillaging the riches of masters. And a shepherding people whose initial presence in the land culminated in cataclysm. How could this not refer to the same event?

Many archaeologists and scholars continue to peddle the notion that there is no evidence of the biblical account of the Israelites’ sojourn in, and Exodus from, Egypt. But that’s disingenuous. Much has been discovered, proving the biblical account found in the early chapters of Exodus. The Ipuwer Papyrus is only one illustrative piece of a very large archaeological picture. For a more general look at the evidence for the Israelites in Egypt, take a look at our article “Uncovering the Bible’s Buried Civilizations: The Egyptians.” For more specific finds relating to Moses, read “Moses’s ‘Ark of Bulrushes.’” And for a general look at the authenticity of the Torah as whole, read our article “The Antiquity of the Scriptures: The Torah.”