The remains of an altar-cum-lavatory that has shed light on Hezekiah’s reign
By Rachael Grellet • October 2, 2018 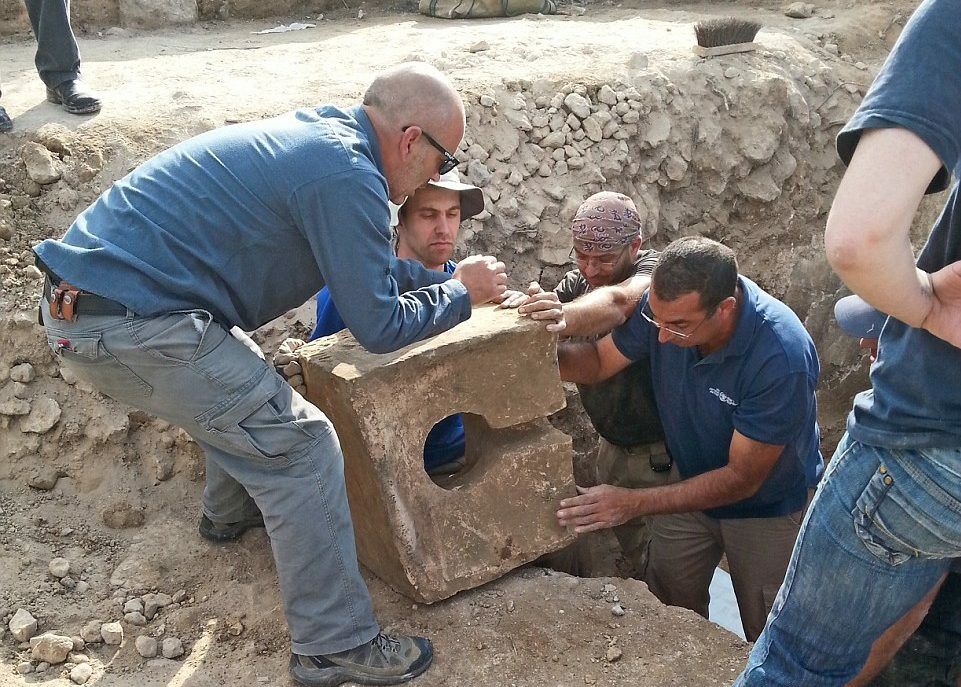 Regular readers and listeners of our site are familiar with King Hezekiah. He was brought into the modern spotlight in 2015 with the announcement of the first bulla bearing his personal insignia to be found in a scientific archaeological excavation.

The dawn of Hezekiah’s kingship is known by his reforms against paganism. The height of his reign was troubled with a wane in obedience to God and the subsequent invasion by Assyrian King Sennacherib. The last two decades of Hezekiah’s life included a great revival with miraculous intervention and deliverance from the hands of Sennacherib. These events are detailed in our article “Hezekiah: a Story, a King, a Legacy.”

An unusual discovery in 2016 highlighted the dawn of his kingship, characterized by the reforms against paganism.

During excavations under Sa’ar Ganor at Tel Lachish, a six-chambered gate complex was uncovered and excavated. In the furthest-right chamber from the outside entrance, archaeologists found what appeared to be an Israelite gate-shrine. The room held two four-horned altars, several ceramic lamps, bowls and stands. This shrine showed the struggle Israel had with paganism.

The horns from these altars, however, had been intentionally broken off. In ancient Israel, a guilty person could grab the horns at the corners of the altar as an entreaty for extreme mercy. To have them removed is an extreme insult to the god. Even more interesting, amid the ruins of the altar, a toilet seat had been installed.

These six-chambered gates are characteristic of King Solomon’s rule where a centralized government was set up. Lachish was built up in the style of Solomon by Rehoboam, who ruled the southern kingdom of Judah after the nation of Israel split. The shrine and toilet seat were found in layers relating to the eighth century b.c.e.

The other chambers held many lmlk seals, which date to King Hezekiah’s period. This is where Bible history really comes alive.

When he took over the throne of Judah, Hezekiah faced rampant paganism. King Hezekiah’s father, Ahaz, had fully supported paganism, even to the point of sacrificing his own children to these gods.

“He removed the high places, and brake the images, and cut down the groves, and brake in pieces the brasen serpent that Moses had made: for unto those days the children of Israel did burn incense to it: and he called it Nehushtan” (2 Kings 18:4).

This verse shows that even relics of true biblical history had been set up as idols!

Hezekiah started with the temple and worked outward, cleansing and preparing the nation to keep the holy days. He used historical figures, such as Joshua and King Jehu, a ninth-century b.c.e. king of Israel, as his inspiration.

Jehu destroyed pagan altars and turned them into public toilets. Hezekiah seems to have followed this tradition when cleansing Lachish, albeit only symbolically. Scientists found no phosphates in the soil beneath the seat, which means it likely was never used.

Though an unusual artifact to support biblical accuracy, the Lachish toilet seat is confirmation of the ancient tradition of showing utter contempt for paganism by breaking the horns off altars and recommissioning the area as a public toilet. Archaeological discoveries continue to shed light on biblical passages, allowing us to delve deeper into history.